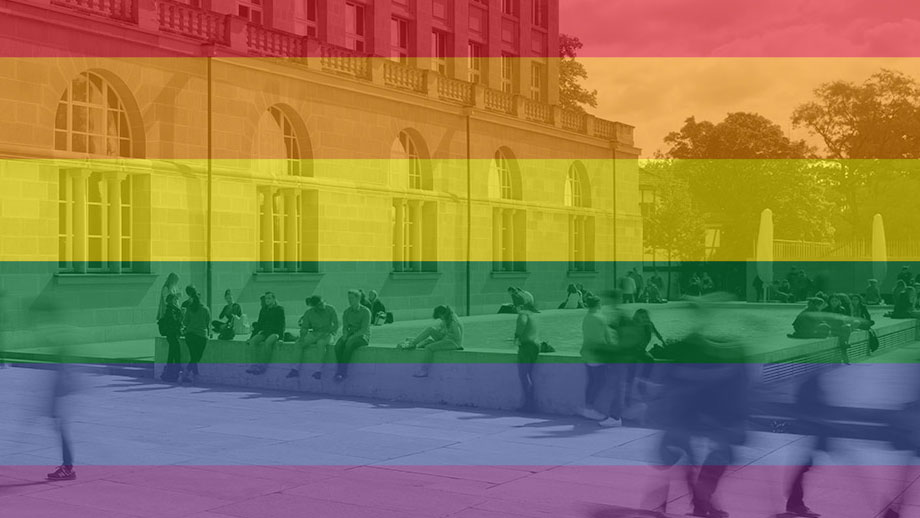 pride month
Pride Month is a key event for the LGBTQIA+ community. UZH is on site with other universities at Zurich Pride Festival on 17 and 18 June 2022 with a booth on the Kasernenareal. (Image: UZH)

The month of June sees a host of events and activities take place in Zurich to celebrate Pride Month. The University of Zurich will also be a part of Pride Festival with a booth on the Kasernenareal in Zurich for the first time (see news).

But today’s colorful celebration of diversity started out as a response to a series of somber events that unfolded in June of 1969, when a police raid on a popular gay bar called Stonewall Inn on Christopher Street (New York) turned violent. The Stonewall riots marked the first time gay people targeted by the police fought back. They were supported by people from the neighborhood, and other gay men, lesbians and trans people also came together to fight their criminalization, stigmatization and exclusion. Since then, Pride Month has gone on to become an established worldwide celebration of tolerance and self-worth in the LGBTQIA+ (lesbian, gay, bisexual, transgender, queer, intersexual and asexual) community.

Important for community and raising awareness

A brief non-representative survey carried out at UZH confirms that Pride Month is still an important time of the year for the LGBTQIA+ community. Luca, who identifies as a gay man, enjoys spending the month among like-minded people. “I no longer feel as alone and get to socialize,” says the English literature and linguistics student. He now feels comfortable with his sexuality and is open about being gay. Having grown up in a conservative environment, that wasn’t always the case. “Pride Month can show other people that you can be happy with your own sexuality. And that you’re proud about being who you are,” explains the 20-year-old. Trans woman Sofia agrees: “It’s just great to have this time of the year where being queer is completely normal.”

For Emily, Pride Month isn’t about the parties or parades, but its original purpose – radical liberation and overcoming long-established norms about what it means to be human. “For me, it’s first and foremost about dealing with my own identity. And I hope that it’s an opportunity to openly discuss little-known topics in the queer community.” The 21-year-old, who identifies as aromantic and asexual, knows from first-hand experience that many people outside the community are unfamiliar with what it means to be “aromantic”. “Most people

believe that everybody has to fall in love, without exception. But that’s just not the case for me – and many others, too,” says the young student.

For 24-year-old Annegret, Pride Month is a great opportunity to shine the spotlight on sexual and gender minorities and foster more acceptance. “The mere fact that businesses are discussing strategies to fight discrimination and universities are thinking about how they can be more inclusive of LGBTQIA+ people is already a positive,” says the student of English literature and linguistics, who identifies as bisexual. And yet, Annegret believes it takes more than just a few rainbow-colored posts on social media. The student believes everybody needs to do their part. “Of course it’d be great if Pride Month was no longer needed – but we still have a long way to go, unfortunately”

We asked the four students about their experiences at UZH as people with diverse sexual and gender identities. They all agreed that they feel very accepted at uni and have had very few negative experiences. They believe that is also has to do with their chosen subject area. “The English Department is a very open and diverse place,” says Emily. “I feel completely at ease there and have found a home.” Luca adds that it helps that queer theory and feminist topics are discussed early in the program. He is convinced that his English literature and linguistics studies greatly helped him address his own identity.

Sofia, who studies physics at the Faculty of Science, also feels very accepted. She came out as a trans woman during her studies, which was met with general acceptance by her fellow students and professors. “I sometimes get odd looks from people who don’t know me, because I still happen to have a deep voice,” she says. And she also sometimes gets asked inappropriate questions that she’d rather not answer. “I understand that people may be curious, but when I get asked such questions over and over for months, it takes a lot out of me.”

Annegret’s experience at university has also been positive. “I still think twice about who I come out to as bisexual, though. But that’s more of a general problem of society and only indirectly relates to my university surroundings.”

While the four students have had very few negative experiences at UZH, they do have a few ideas on how things could be even better. For example, both Sofia and Annegret would like to finally see gender-neutral toilets introduced. While she was transitioning, going to the toilet was a very daunting task for Sofia, because she didn’t really fit into either of the two options. Also, changing her first name in the university’s admin system took much longer than promised.

Annegret would like to see more awareness of LGBTQIA+ topics in general at UZH, and for teaching staff and other students to use language that is gender-neutral and non-discriminatory. Emily wishes that the university as a whole be more open and do more to raise awareness, so that students at all departments, institutes and faculties can feel safe. Meanwhile, Luca isn’t fully convinced of UZH’s general support for the LGBTQIA+ community. “The university is an academic educational institution that should promote acceptance for different identities.” Raising a rainbow flag atop the main building and focusing on the issues of minorities for one month is only the beginning, believes the student.

PolyUniQue champions the concerns of LGBTQIA+ people at UZH. The association recently formed when the two associations L-Punkt and z&h merged to create a single inclusive student organization. PolyUniQue strives to be a space where everyone can be themselves and find other like-minded people. They organize various events (both private and open to the public), ranging from karaoke and game evenings to hikes and bike tours as well as monthly dinners and queer parties.

The Gendre Equality and Diversity Department is available to all UZH employees for general information and advice related to gender identity and sexual orientation.