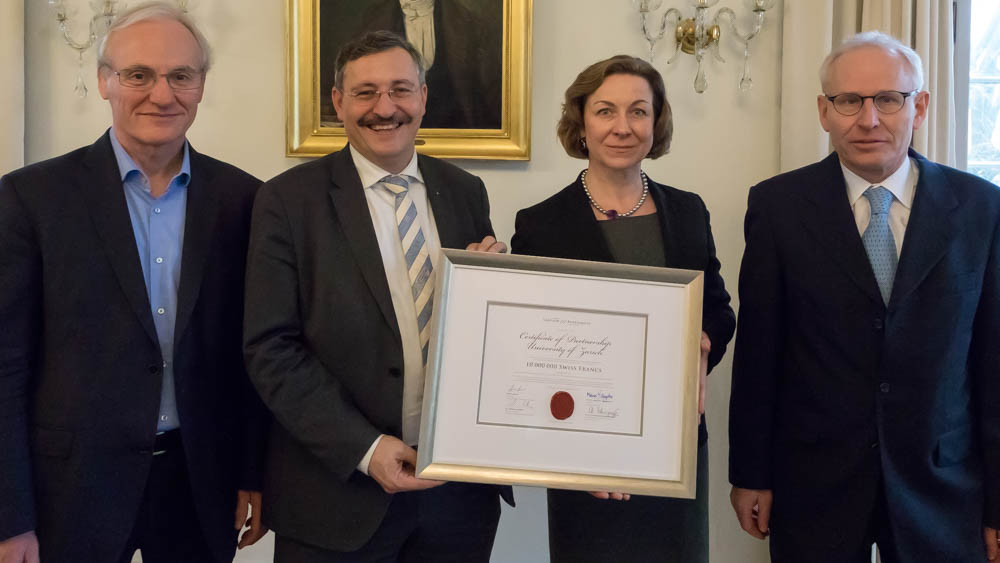 At a media conference on Thursday, President Michael Hengartner expressed his great satisfaction with the foundation’s support for the new center. The donation would allow research into the long-term effects of breastfeeding to be stepped up, and was an excellent fit with UZH’s efforts in the area of youth development research, which was being carried out in particular at the UZH Jacobs Center for Productive Youth Development, he explained. The 10 million francs of funding provided by the Family Larsson-Rosenquist Foundation would allow the creation of a professorship and associated research fund within the Department of Economics researching the economics of child and youth development with a focus on breastfeeding.

The donation comes on top of the 20 million francs endowed three years ago by the Family Larsson-Rosenquist Foundation for a professorship within the Faculty of Medicine to research human milk and early child development. With the new professorship, the emphasis is on investigating the longer-term effects. “The two donations mean we can research an important topic from different angles such as biomedicine or effects on society,” said the President. “The combination of medical and economics research in this area is unique worldwide and may yield valuable new insights,” he continued.

Ernst Fehr, UZH professor of economics, explained to the media conference the contribution that economics can make to the subject of breastfeeding and child development. “We have long been concerned with looking at the reasons behind economic decisions and productive behavior,” said the researcher, who is internationally renowned for his studies in behavioral economics.

In principle it seems self-evident that good early childhood nutrition and therefore breastfeeding is beneficial for a child’s development. But many more detailed questions about the links between breastfeeding and socioeconomic behavior have not yet been researched. Economists today have the tools to be able to approach these questions empirically and to tease out the causal factors.

An example is the huge influence that midwives have in mothers’ decisions to breastfeed. “Well-designed studies make it possible to determine the decisive factors from the existing data,” said Fehr. The economist is convinced that the area of development and breastfeeding is a hitherto neglected field of behavioral economics that promises valuable findings.

Managing director of the foundation Katharina Lichtner presented a certificate confirming the endowed professorship and research fund to Michael Hengartner and Ernst Fehr. She then spoke about the research network supported by the foundation in the USA, England, and Australia. Further projects were planned, for example one in China focusing on epidemiology. “The activities in Zurich are not isolated, but are part of an international network,” explained Lichtner. She said that the renowned UZH Department of Economics was an ideal addition to this network.

If all goes to plan, the professorial chair will be filled by the Fall Semester. Ernst Fehr is optimistic that they will meet this schedule, initial interviews with candidates having already taken place. The filling of the chair at the Faculty of Medicine had been delayed, however, owing to a withdrawal. Michael Hengartner took the opportunity to stress the University of Zurich’s independence in research and teaching: “We decide fully independently and autonomously of the foundation on the appointments to the professorial chairs.”