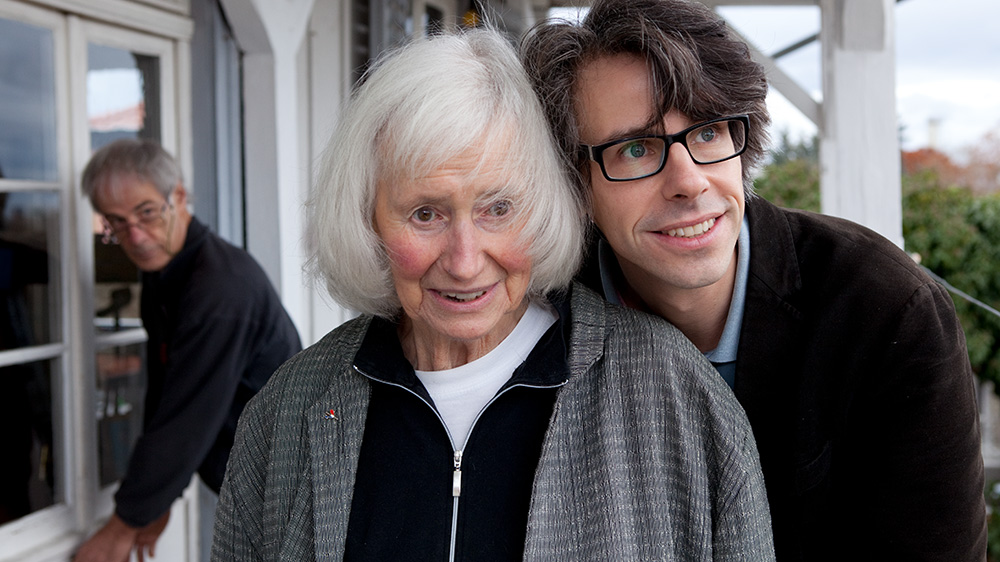 Scene from the movie «Vergiss mein nicht».
Melancholic yet upbeat: Filmmaker David Sieveking (right) made a film about his mother, who suffered from dementia. Last Tuesday he talked about it at an event in the Sterben live (“Dying Up-Close”) series. (Image: kinofreund.com)

For a long time death was a taboo subject. In the 1960s and 1970s it seemed to no longer have a place in modern life. That has changed radically in the last two decades. People meet in so-called death cafés to talk about death, their fears, and hopes. In addition to feature films and documentaries, dying is now also discussed across digital media, including in blogs. Technology has made it easier to make good-quality films quickly, and to capture people on film as they die. In the Netherlands there’s even a popular soap that traces the fate of young people with cancer until their death. There are many videos on YouTube dealing with death and dying. In a nutshell, these new media formats are removing the old taboos.

“People have shifted their need to engage with dying and death to a new, digital arena,” concludes Tobias Eichinger, a senior assistant at the Institute of Biomedical Ethics and History of Medicine. Together with Anna Magdalena Elsner, a postdoc on a Marie Heim-Vögtlin SNSF grant, and Nina Streeck, a research associate at the UZH Institute of Biomedical Ethics and History of Medicine and Chair for Spiritual Care, he has organized a series of events devoted to film, death, and dying. Four events have been held to date, with one more to follow on 8 May.

“The events have met with great interest. People have a strong need to talk about dying and death,” says Anna Magdalena Elsner. At the events a film is screened and then two experts from different academic disciplines talk about it and give their views. The filmmakers are present to give their perspective. This setting allows people in the audience to also add their experiences to the comments from the academics. Watching the film together leads to lively discussion.

Elsner says that the series is also an opportunity to show members of the public what they’re researching. The three organizers, Nina Streeck, Anna Magdalena Elsner, and Tobias Eichinger, work at the Center for Medical Humanities, where they’ve been approaching the topic of medicine and dying from different angles. As part of her SNSF project, Elsner is looking into narratives of dying and palliative medicine in French literature. In her research project, Streeck is addressing the question of how to “die well”. Eichinger’s theme is the representation of problems of medical ethics in film.

Death played out deliberately on camera

But what precisely prompts someone who is dying to be filmed? An example cited by Elsner is Bouton, a 2011 Swiss film by Res Balzli. The puppeteer Johanna Bory, suffering from breast cancer, wanted to deliberately play out her dying on film. In dialog with the marionette Bouton, she tries to find meaning in her early death.

But Eichinger believes that the wish to have one’s dying recorded on camera could also be motivated by the idea of leaving a legacy. An example would be the film Ein Sommer für Wenke. It’s about a thirteen-year-old girl with cancer who wants to leave her family something to remember her by.

Eichinger believes these films help create greater awareness. They show the malleable quality of death. “People take their dying into their own hands. In the most extreme case, suicide, they even determine the moment of death themselves.” That’s what the film How to Die: Simon’s Choice, to be shown on 8 May, is about. On Tuesday, 24 April, filmmaker David Sieveking was present at the screening. He had filmed his mother Gretel, who suffered from dementia and then passed away. The film is called Vergiss mein nicht. The invited experts on 24 April were Michael Schmieder from the Sonnweid dementia center of competence in Wetzikon, and Professor Harm-Peer Zimmermann, a cultural researcher at UZH.