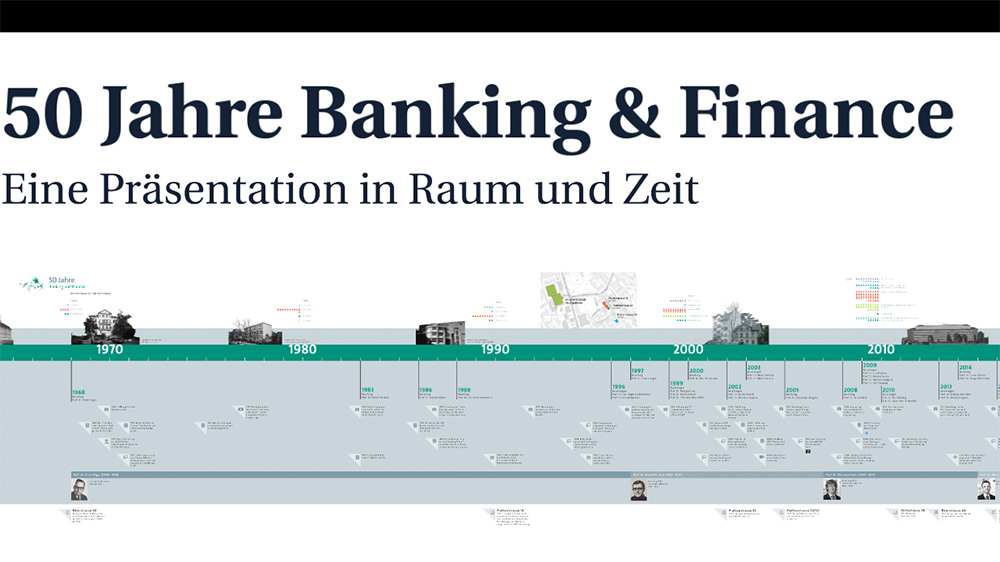 50 Jahrfeier
Click on the image to go on a journey through time (in German)!

1968 – a year that evokes upheaval, revolution and rock ’n’ roll. But it’s also the year in which the Department of Banking and Finance – or “Institut für Schweizerisches Bankwesen”, as it was then called – was founded at the University of Zurich. Far from being an act of revolution, the new department was founded with the approval and support of the Government Council of the Canton of Zurich. Peter F. Weibel, President of the UZH Foundation’s Board of Trustees and former CEO of PwC Switzerland, was a teaching and research assistant at the newly established department at the time. At last week’s anniversary event in the main lecture hall at UZH, he elaborated on the reasons that led to the creation of the new department: “The great growth of the post-war years obviously pushed the Swiss banks to their internal limits. They lacked the organizational expertise to manage their growth. There was an enormous need for training.”

Over the years, the Department of Banking and Finance developed into one of the largest of its kind in Switzerland and today ranks among the very best in Europe, said Harald Gall, Dean of the Faculty of Business, Economics and Informatics. The UZH department covers a wide range of topics and doesn’t shy away from tackling innovative research topics, such as sustainable finance, the impact of artificial intelligence on banking, or the role of crypto-banks. It often takes an interdisciplinary approach in its research and teaching, and has also developed a continuing education program that takes account of the needs of professionals.

Entwicklung Zahlen
The department’s staff has grown considerably over the past 50 years. (Illustration used with permission)

Marc Chesney, the current head of the department, took the 250 guests on a journey through time. The department has grown considerably in the past 50 years, from 7 employees to more than 180 in 2018, and has seen a great number of research and teaching projects come to fruition. In teaching, in particular, the department has always strived to use the latest didactic methods to cope with the sharp rise in student numbers, for example by embracing e-learning and MOOCs (massive online open courses).  In addition, the Department of Banking and Finance is the only university department in Switzerland that offers a Bachelor’s degree in banking and finance.

After the event, visitors had the opportunity to learn about selected projects of the department at an exhibition in the Lichthof, which was organized with the involvement of students.