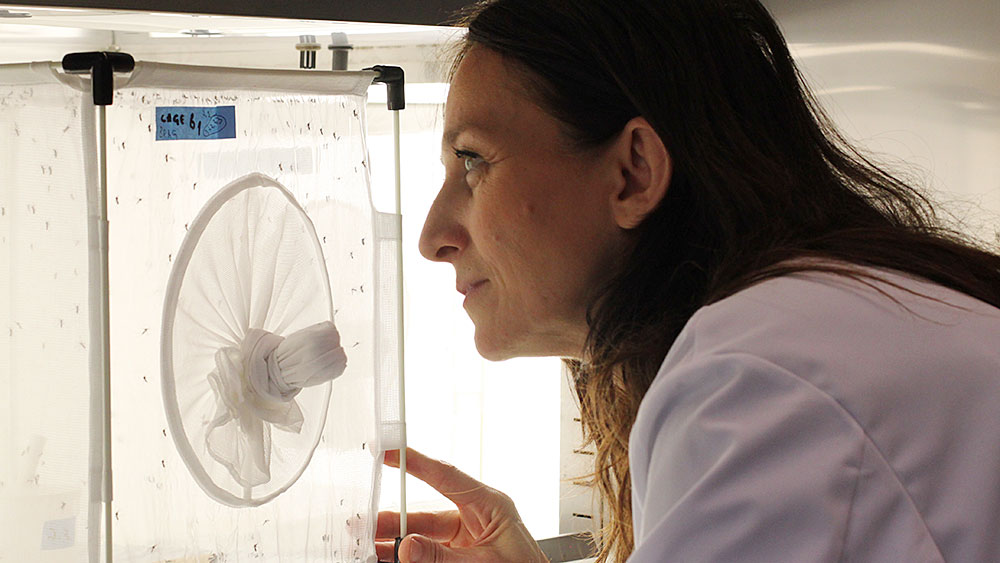 In May 2015, Zika virus started spreading from Brazil to 47 countries worldwide. The virus poses a particular threat to pregnant women, as it can lead to deformities in the fetus. So far there is no treatment or vaccine available, and many questions remain unanswered: What are the characteristics of the virus? What exactly happens when a women has the infection during pregnancy? Are there transmission routes we’re not yet aware of?

To answer these questions, the European Union has funded the ZIKAlliance research consortium with its Horizon 2020 research and innovation program. ZIKAlliance involves 53 partners in the scientific community worldwide, including the University of Zurich. Insect researcher Eva Veronesi, a postdoc at the UZH Institute of Parasitology, is leading a team of three looking into a specific question: Is the Asian bush mosquito (Aedes japonicus), which can now also be found in Europe, able to transmit Zika virus?

What we know so far is that there are three main routes for person-to-person transmission of the Zika virus: via the bite of an infected yellow fever mosquito (Aedes aegypti, also called the Egyptian tiger mosquito), from a pregnant woman to the fetus, and through sexual contact with an infected person. Recent discoveries also confirmed that the Asian tiger mosquito (Aedes albopictus), can also potentially transmit Zika virus.

The yellow fever mosquito is responsible for the large majority of infections. So far it hasn’t settled in Central Europe because it can’t survive the winter temperatures. But there are two other exotic species of mosquito that have gained a foothold in Central Europe, including Switzerland: The Asian tiger mosquito has been reported in Ticino since 2003, and the Asian bush mosquito has been found in this country, especially in the north, since 2008.

This means that to determine whether Zika virus could also spread in Switzerland, it’s important to know whether other species of mosquito can transmit it. Eva Veronesi has taken on the task of finding out whether this is the case for the Asian bush mosquito. She and her team have been collecting eggs at three locations in Switzerland to breed the mosquito in the lab. They then give the insects blood infected with the Zika virus to feed on. If the virus can then be found in the mosquito’s saliva, it shows the potential role of this mosquito as a vector of Zika virus.

Research in a high-security lab

Veronesi and her team will investigate not only the role of this mosquito species for Zika virus transmission, but also the effect of climate conditions. For this reason, the study will include different groups of Zika-infected mosquitoes incubated under a realistic Swiss temperature fluctuation regime. Three different variants of the Zika virus will be tested at the high-security lab: the South American, African, and Asian.

But there’s no reason to panic. These viruses aren’t endemic – in other words established – in Switzerland. However, it is possible that infected people import the virus. If such a person is bitten by a mosquito, the insect can transfer the virus to another person. “So it’s very important to know which mosquitoes can transmit which viruses. That way we can monitor the relevant species of mosquito and in case of an outbreak adopt appropriate population control strategies,” explains Veronesi.

There’s a lot of research to be done, as each species may act differently from population to population. For example, a population of Asian bush mosquitoes in Germany was unable to transmit the West Nile virus, while the population in Switzerland was successful in doing so.

“If the Asian bush mosquito also turned out to be a potential vector for the spread of Zika virus, it would be good to monitor it on a nationwide basis,” says Eva Veronesi. Switzerland currently has only one program to monitor and control the Asian tiger mosquito, in Ticino. The options for decimating the population of exotic mosquitoes include removing standing water containers, the use of insecticides or treating flooded areas with bacteria that kills mosquito larvae. Other innovative measures include releasing sterile mosquitoes to interrupt the production of offspring.

Eva Veronesi expects her research to yield the first findings by the end of 2017. The ZIKAlliance projects run until 2019 (see box). For Veronesi the alliance isn’t just a prompt, sensible response to the Zika epidemic on the part of the EU, but a good example of establishing multidisciplinary collaboration to address similar health threats in the future. Veronesi has no doubt that more mosquito-transmitted virus will arrive. “Preparedeness and a good knowledge of the role of these mosquitoes in virus transmission are therefore of paramount importance”, she says. Globalization hasn’t just made travel easier for people, but for mosquitoes and viruses too. Added to this, climate and environmental changes have expanded the habitats of many transmitters of exotic diseases, in Europe as well.

ZIKAlliance is supported by the European Union Horizon 2020 Research and Innovation Programme under the ZIKAlliance Grant Agreement 734548 to better understand the clinical and fundamental aspects of infections by Zika virus (ZIKV).