I take a morning stroll in the park by Russell Square, where early in the week I’d met Aliénor Nina Burghartz, a UZH student spending a year at King’s College London – or more precisely at the Dickson Poon School of Law. Since 2009 the school has offered a double degree master’s program together with the University of Zurich’s Faculty of Law, with one year at UZH and one year in London.

Burghartz first did UZH bachelor’s degrees in economics and law. The double master’s is the ideal opportunity to combine her knowledge in her specialty, international business law. She’ll be in London until August. A more in-depth account of her stay will appear in the October issue of UZH Journal. In the meantime, readers wanting to know more about the experiences of UZH exchange students in London and other cities can check out the reports on the International Relations website (primarily in German). 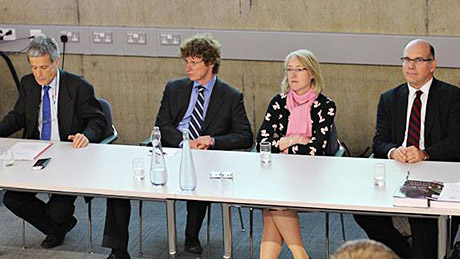 The closing UZH event at Zürich meets London is a podium discussion on financial market regulation – an important topic for both Zurich and London. According to the latest Global Financial Centres Index, London is the most important financial center in the world, and Zurich is ranked sixth.

Since 2013, one of the University Research Priority Programs (UFSPs) at the University of Zurich has been devoted to financial market regulation. It’s an interdisciplinary program involving people from both economics and law.

The podium discussion at the Institute of Advanced Legal Studies kicks off. The University of Zurich is represented by law professors Rolf Weber and Kern Alexander, and professor of economics Thorsten Hens, with London represented by Niamh Moloney from the London School of Economics (LSE), a professor of law specialized in EU financial market regulation who had a guest stay at UZH in April.

Thorsten Hens explains that financial market regulation worldwide has been tightened in the wake of the financial crisis. He contends that the London market is more heavily regulated than Zurich. In certain respects, he says, the UK goes even further than the EU, which only lays down framework regulations.

For Kern Alexander, tighter regulation can often make sense. He describes the case of a British citizen who shortly before the financial crisis invested EUR 140,000 in a financial construct at a Swiss bank, only to lose it all. The client took a complaint about the bank to the UK ombudsman, but his claim for compensation was rejected. For Kern Alexander this is a clear case of so-called misselling. While it’s true that the client took a substantial risk, he was not given adequate advice, and was sold an inappropriate product.

Alexander calls for banks to declare the risks of their financial products more clearly, to the extent that they give them colored points, with red, for example, indicating a very high risk of fluctuation in the value of the investment. The podium experts mentioned more than once that financial transactions don’t just involve legal considerations; it’s also about a bank’s culture in terms of how it deals with its clients.

Even so, the legal framework for financial centers all over the world is very important. As a result of globalization and the increased integration of financial markets, international standards are becoming more and more important. Switzerland has thoroughly overhauled its financial market regulation in recent years. At the beginning of this year the Swiss Federal Council enacted the Financial Market Infrastructure Act and the corresponding implementing ordinance. In the European Union, Mifid II, a core component of securities and financial market regulation, is due to enter into force at the beginning of 2018.

The people working on the Financial Market Regulation University Research Priority Program at UZH contribute their findings to the public debate. For example they have made concrete proposals to the consultation phases for changes to the legislation in Switzerland.

Co-chair of the UZH Alumni UK Chapter: Stefan Wey (video in German only).

UZH’s contribution to the Zürich meets London festival closes with a dinner at the elegant Hotel Russell in the university district, attended by around 20 members of the Alumni UZH UK Chapter. It’s a chance to talk with the professors who took part in the podium discussion, and with UZH Vice President Christian Schwarzenegger. A lively discussion of the imminent Brexit referendum ensues. In a straw poll of those present, almost everyone expects a no vote to the UK’s exit from the EU. On 23 June we’ll see whether they’re right. 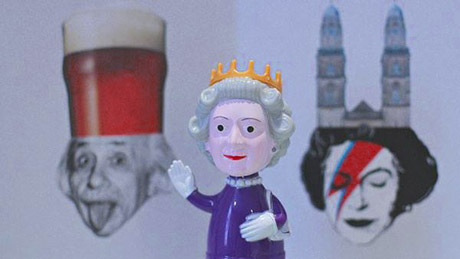 On her way back to the hotel, Yasmine Inauen takes stock of the festival. The head of International Relations at UZH is delighted that Zürich meets London has been such a success. She says UZH has been able to foster and deepen its contact with important partner universities in London, at the level of both individual researchers and university leadership. “Last but not least, collaborating with the City and Canton of Zurich has also helped foster mutual understanding.” Nothing has been decided yet, but following Zürich meets New York in 2014 and Zürich meets London, the City and Canton of Zurich and the Zurich universities may possibly join forces on the international stage again next year – in Hong Kong.