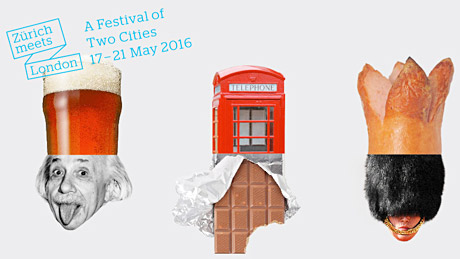 From 17 to 21 May the Zürich meets London festival in the UK capital will celebrate the best the two dynamic, innovative cities have to offer, with representatives from the Zurich and London science, academic, arts, and business worlds showing and talking about their work.

The unifying theme is the 100th anniversary of Dada. Visitors can look forward to highlights including films on Dada past and present, a twelve-hour Dada marathon featuring people from the arts scene in a boxing ring, and a Dada gala dinner. There will also be plenty of other culinary delights, with Londoners getting the chance to discover delicacies including tirggel, biberli, and cervelat.

The “brain food” at the festival will be provided by London and Zurich universities, with the University of Zurich joining forces with world-class establishments including University College London and Imperial College to stage a number of different events with themes including: Do Verdingkinder (indentured child laborers) suffer from their experiences their whole life long? How can computational psychiatry use mathematical models to better understand mental illness? There will also be a podium discussion on financial market regulation in Switzerland and the European Union. The Wyss Translational Center Zurich will present LifeMatrix, a project to develop artificial tissues such as blood vessels and heart valves. There will also be a dinner for UZH alumni in London to coincide with Zürich meets London.

After Zürich meets New York in 2014, this year’s Zürich meets London festival is designed to intensify contact with the UK capital. Zurich was already there back in 2010 for the conference on sustainable urban development, and in summer 2012 for the Olympics. The festival continues a series of initiatives by the City and Canton of Zurich to promote exchange and networking with Switzerland’s biggest town. The University of Zurich is delighted to take part and have the opportunity to forge new contacts with London universities. UZH News will be reporting from the festival.