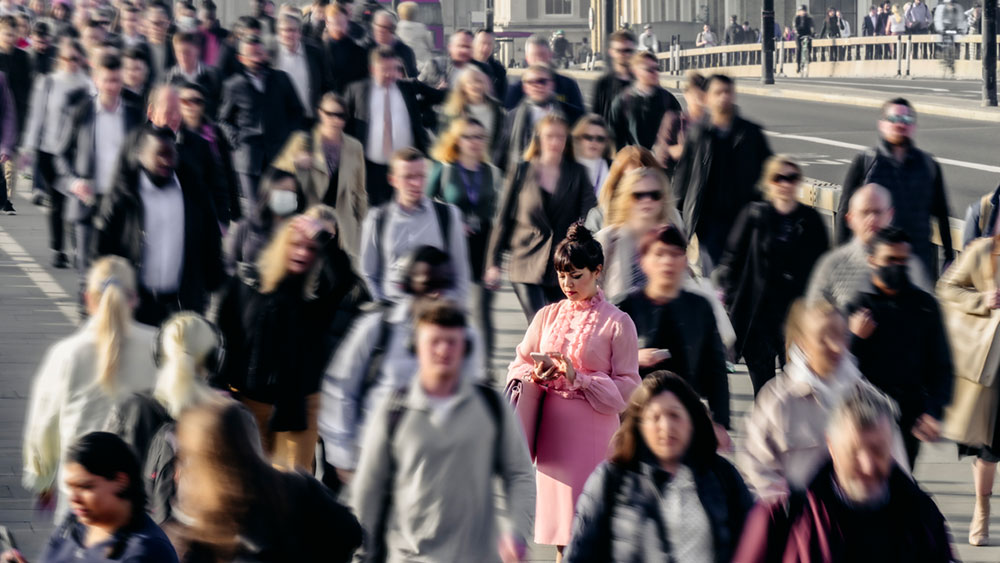 Social media posts can be an additional source of information about the state of mental health in urban populations. (Image: iStock / JohnnyGreig)

To find out about a population’s physical or mental health, researchers have mostly had to rely on data from doctors’ practices, hospitals or mental-health institutions. These data, however, are based on information from people who are unwell in some way, and they therefore aren’t necessarily representative of the entire population. This is where social media can play a key role, as posts on these platforms can shed light on the wellbeing of their users. In other words, the cloud contains a treasure trove of data – and Oliver Grübner, Markus Wolf and Marta Fadda are putting it to good use.

Oliver Grübner, a health geographer, and Markus Wolf, a psychologist, both conduct research at UZH. Marta Fadda, meanwhile, works as an health communication specialist at the Università della Svizzera italiana. The three researchers, each from different disciplines and faculties, have now won the UZH Postdoc Team Award (see box) for their outstanding independent interdisciplinary research into the links between social media posts and the mental health of populations.

Based on a repository created by Oliver Grübner and Marta Fadda back in 2018, their research provides a visualization of geo-referenced tweets across Europe that contain references to emotions such as stress, anger, fear or happiness. “We not only analyzed the texts, but also used an interface to organize the tweets in terms of their time and location,” explains health geographer Oliver Grübner.

The trio was also able to use this approach in a more recent project, in which they collected and geo-located information about the emotions of people in New York from the tweets posted from the city during the Covid-19 pandemic. 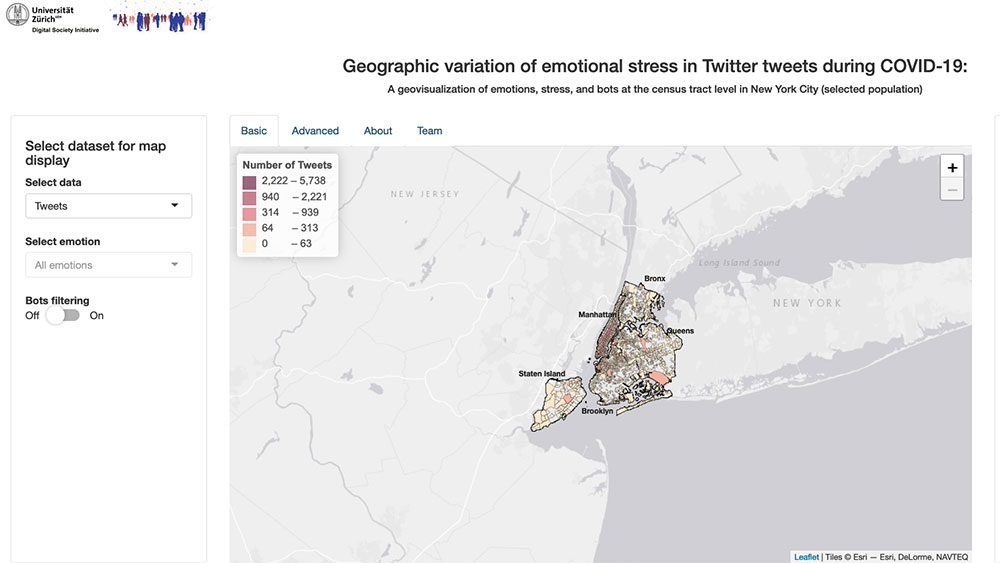 To correctly interpret emotional statements, certain words need to be analyzed with linguistic tools and algorithms, says Markus Wolf, who joined the group in 2019, adding his expertise in clinical psychology to the project. Marta Fadda was in charge of developing the ethical and data protection principles for the group’s research.

In another project, the researchers analyzed noise and other environmental factors in Switzerland and how they are linked to emotional stress and suicidal feelings expressed on Twitter. Their findings will be published soon. The group is also working on finding out how social media data can be combined with other digital platforms such as smart city applications to improve the mental health of people living in urban areas. Smart city refers to ideas and concepts for urban spaces that aim to use modern technology to make them more efficient and climate-friendly and ultimately improve the quality of life of city dwellers.

Looking beyond the confines of disciplines

The newly minted award-winners emphasize how important it is to cooperate across disciplines, faculties and institutions. “It is incredibly valuable, because you meet other people who are open to interdisciplinary collaboration. In our case, we ended up being a perfect match,” say the three researchers. To share their experience with others, they created the course Big Data in Public Health at the Swiss School of Public Health (SSPH+), which is aimed mainly at PhD candidates. “We want to explain the interdisciplinary aspects of our collaboration to other junior researchers and motivate them to look beyond the confines of their disciplines.”

It’s in the eyes 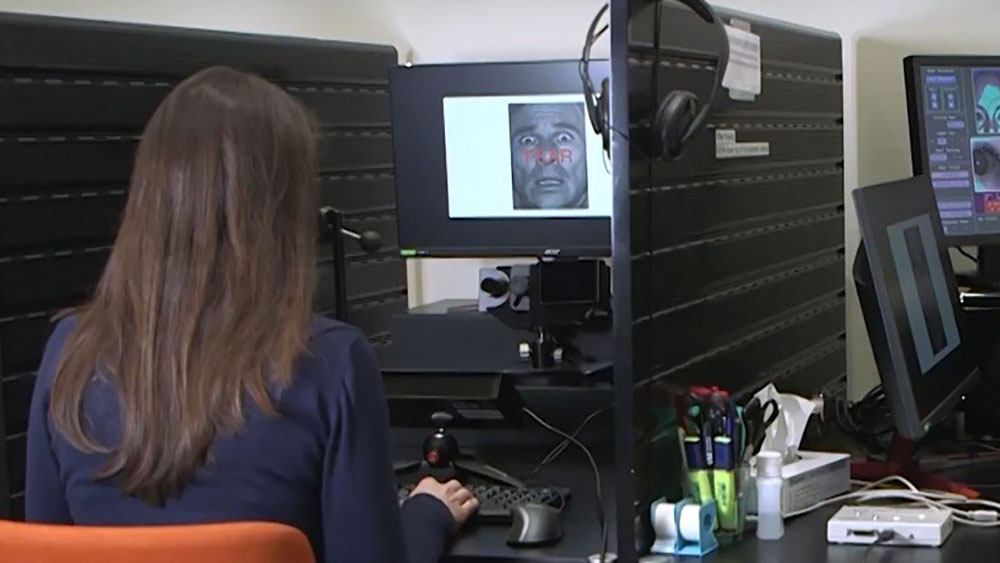 A participant's pupil reaction is recorded during a stressful situation. (Image: UZH)

Silvia Maier and Marcus Grüschow met at the Department of Economics. “The department had a policy at the time that people who shared an office should be working on research questions in different fields,” says neuroeconomist Silvia Maier, who researches at the joint Translational Neuromodeling Unit at UZH and ETH Zurich. “The idea is that by talking to each other, people will come up with shared research ideas.” And this is precisely what happened with her and psychologist and neuroscientist Marcus Grüschow. Their research focuses on self-regulation and stress. It explores who is or isn’t good at handling stress, and how we can learn to control our response to stress. The researchers’ work has now also been recognized with a Postdoc Team Award.

In a research project on dietary self-control, Silvia Maier was able to show how even moderate levels of stress negatively affected test subjects’ self-control – and not just acute stress, as was already known. For the project, she analyzed various regions of the brain using functional Magnetic Resonance Imaging (fMRI) to record the neural interactions between stress and self-control. Having established these data, she then teamed up with Marcus Grüschow, who specializes in pupillometry, the measurement of pupil size and reactivity.

“The size of pupils plays a key role when measuring the emotions of someone who is under stress,” says Marcus Grüschow. “Exposure to light isn’t the only factor that influences the size of our pupils. We can also observe changes when lighting stays the same.” A person’s eyes can reveal information about their emotional state, for example. When we’re happy or afraid, our pupils dilate. This is regulated by our autonomic nervous system and happens unconsciously.

The researchers observed test subjects using pupillometry and measured their response to unexpected strong stimuli. Scary images, for example, trigger a pupillary response that can be observed. This happens in mere milliseconds. Over the course of their project, the researchers were able to identify individuals who would respond to the stimuli but then also flexibly reappraise the situation. These individuals successfully used strategies to modulate emotional stress, and as a result of this their pupil constricted. “Some people even do this automatically. They use an emotional buffer or regulation strategy to mitigate the stress-inducing effects,” explains Grüschow. “People who can respond this flexibly are resilient to stress, while others experience stress for longer.” The latter may be at risk of diseases as a result of exposure to stressful situations.

“It’s not trivial to measure whether individuals engage in regulating their emotions at any given moment, and most importantly, to predict how successful they will manage to do it.  These questions are paramount for both basic and applied research, because inflexibility or inability to adaptively regulate emotions through strategies that favor beneficial behavior in the long term is a hallmark of diseases such as depression, eating disorders, substance abuse and post-traumatic stress disorder,” says Silvia Maier.

Measuring the increase in pupil dilation could be used to help people who react strongly to stress and emotional stimuli improve their resilience toward stress. This is one of the projects that Silvia Maier and Marcus Grüschow are currently pursuing.

The new UZH Postdoc Team Award recognizes interdisciplinary postdoctoral teams for their outstanding and independent scientific achievements. UZH’s research development committee selected the winners of the inaugural award in December 2022. The award is worth CHF 15,000, funded through a generous donation by a UZH alumnus to the President’s Fund of the UZH Foundation. The next call for submissions will take place in the 2023 Spring Semester.