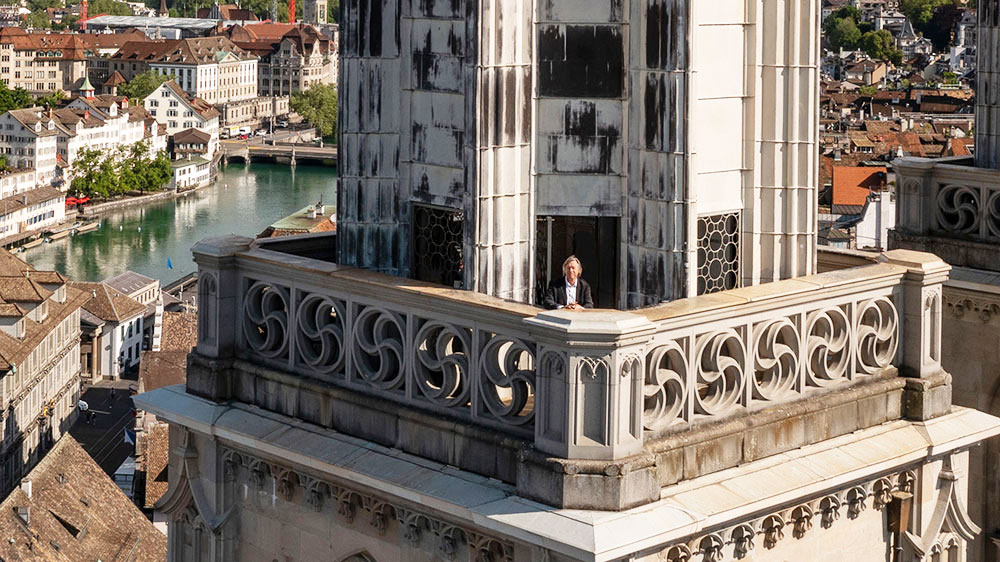 Thomas Schlag recalls the decisive moment clearly: as a youth preparing for confirmation, he wanted to discuss something with his minister. At the door of the parsonage, he was told he would find the pastor in the garden. As young Thomas went round the imposing manse into the garden, he saw the pastor sitting peacefully under a tree engrossed in a thick heavy book. He was hit by the sudden realization: that’s what I want to do with my life. And he did. It’s easy to picture the now professor of practical theology in a similar scene, sitting in the garden of his family home in Calw, Baden-Württemberg, thinking and reading. The view from his city center office at the Department of Theology in Zurich also recalls in some ways the old parsonage garden. On one side, the arched windows look out onto a large acacia tree on Grossmünsterplatz, while the casements on the other side of the building open onto the cloister, where the chirping of sparrows and the gentle splashing of a fountain is punctuated by the chatter of tourists.

Inside the office, however, it’s a contrasting, rather less idyllic, scene. Books, papers and files are piled up all over the place – perhaps a reflection of the jumble of thoughts, plans and projects inside the theologian’s head. As leader of the new University Research Priority Program (URRP) Digital Religion(s), Thomas Schlag is bursting with ideas. With great enthusiasm – but also exuding calm, as if he were indeed relaxing in a garden or cloister – he explains the background to the unique initiative. “I’m eager to see where the journey will lead,” says Schlag. We don’t know how digitalization of religious practices will look in 10 or 12 years. But the digital revolution has already unleashed an incredible dynamism in all areas of society, including religion.

“We are hardly able to keep up with the changing phenomena,” says Schlag. Sometimes his research feels like trying to catch butterflies, he adds. You chase after one and in the process discover a dozen other, even more interesting, specimens. Schlag is thrilled about the URPP: “It enables us to conduct future-oriented research in the best sense.”

The researchers will initially gather information about the expression and the effects of religious content, alignments and positioning in digital media. Most recently, the pandemic accelerated the pace of digital change, including in day-to-day religious life. Such changes range from ministers on Twitter and pastoral care via chat to religious influencers, fora and initiatives exploring questions of faith. Some of these innovative practices may not stand the test of time, but many of them are undoubtedly useful. The barriers that prevent people from taking part in church services are significantly lowered with online services – they make it possible, for example, to follow the funeral of a relative abroad.

But isn’t digitalization also leading to increased secularization? Yes, nods the theologian, you might think that. But Schlag has found the opposite. On the one hand, church membership is dwindling, but on the other hand, he has observed a broad spectrum of religious activity happening online. Rather than true secularization, he calls it a de-institutionalization. The longer it exists, the more decoupled online religion is becoming from the large institutions. New forms of expression are being used, such as chat groups or prayer fora, that are not linked to a particular church. “The religious landscape will no longer be characterized by the two great mountains of the Catholic and Protestant churches – they will remain, but new diverse footpaths will form around them,” predicts Schlag. “In the future there will probably be less of the classic church congregation tackling the well-trodden mountain path together, and more a multiplicity of communities striking out on individual paths according to their own religious practices.” But one thing remains, whether online or in traditional settings – the search for transcendence. 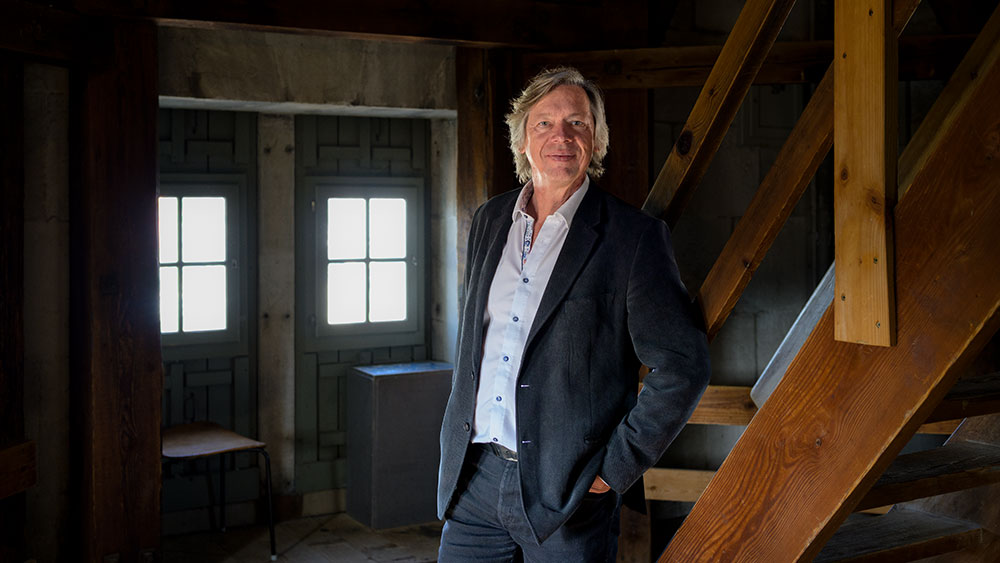 Thomas Schlag
“I would like to see criteria developed that could help politicians and internet companies legally tackle hate speech and religious radicalization in the future.” Thomas Schlag, theologian. (Image: Marc Latzel)

What about Schlag’s own religious practice? Is he a digital devotee? He shakes his head: he prefers direct encounters in the community, and appreciates the spiritual ambiance of the church. But there are certainly moments in the digital world too that he finds moving, for example a thought-provoking “word of the day” tweeted by a colleague, or being able to follow the online services of the church in Edinburgh which the Schlag family attended during an exchange year in Scotland.

What makes faith and religion stand out when there are so many options for digital distraction these days? Outside the window there is a flutter of wings as the sparrows take their leave. The water in the fountain continues to tinkle softly. Schlag is thinking carefully. For him, it is the questions about human existence: where do I come from, why am I here, and where does my path lead? “If people try to navigate these three questions and turn to certain religious traditions, texts, lore or symbols for orientation, whatever their confession, that for me is an expression of religious practice,” says Schlag.

The internet is certainly awash with a plethora of religious-themed content: the Instagrammers “Pfarrer aus Plastik” (plastic priest) and “Holy Shit” or YouTubers “Anders Amen” (Amen otherwise) are just three examples of web-based initiatives supported by the regional churches. These types of accounts produce accessible but at the same time meaty posts, blogs and vlogs about issues of the day, such as the generation gap, women in the church, or same-sex relationships. In addition, there’s an endless variety of religious influencers representing all confessions and none.

Are they the missionaries of the digital world? That might be going a bit far, but it’s fair to say that certain groups use the internet as a way of spreading their own religious message. “We’re not talking about narrow-minded crusaders,” explains Schlag. “Influencers tend to talk authentically about their faith and what is important to them. Some of them have a considerable number of followers.” A sub-project of the URPP will look specifically at these types of influencers.

With so much diversity, some of the old barriers are broken down. The big question lurking in the background is one of authority. “With digitalization, interpretative authority is changing: there’s no copyright any more. Religious communities’ supervisory bodies can no longer effectively intervene if someone veers off course,” explains Schlag. Radical ideas, religious intolerance and discriminatory or defamatory views can therefore spread more or less unchecked. In another research project together with colleagues from the fields of computational linguistics and law, Schlag is trying to find out more about the phenomenon of hate speech.  “I would like to see criteria developed that could help politicians and internet companies legally tackle hate speech and religious radicalization in the future,” says Schlag.

Although he and his team at the URPP Digital Religion(s) are just starting out on their mission, the major theological questions thrown up by the digital revolution are already pressing him to seek answers. Take artificial intelligence, for example. One AI software program developed in Silicon Valley is already challenging our ideas about eternal life. It offers the possibility of creating your own avatar that would live on after your physical death – and continue to develop autonomously. But what becomes of the Christian concept of the afterlife if our avatars outlive us? Schlag recently debated these issues with his adult sons. The youngest pointed out a real problem with the technology: “If no one knows you any more after three or maybe four generations, who will turn you off?”

While enjoying the historic location of his office, Thomas Schlag is clearly not a man who ignores progress. He is preparing himself for the theological questions of the future with a level-headed, intellectually rigorous examination of the issues – not quite under a tree in the parsonage garden, but nevertheless with the view of the acacia tree and the bustle of Grossmünsterplatz to inspire him on one side, and on the other the calm of the cloister with its central fountain to remind him of tradition.