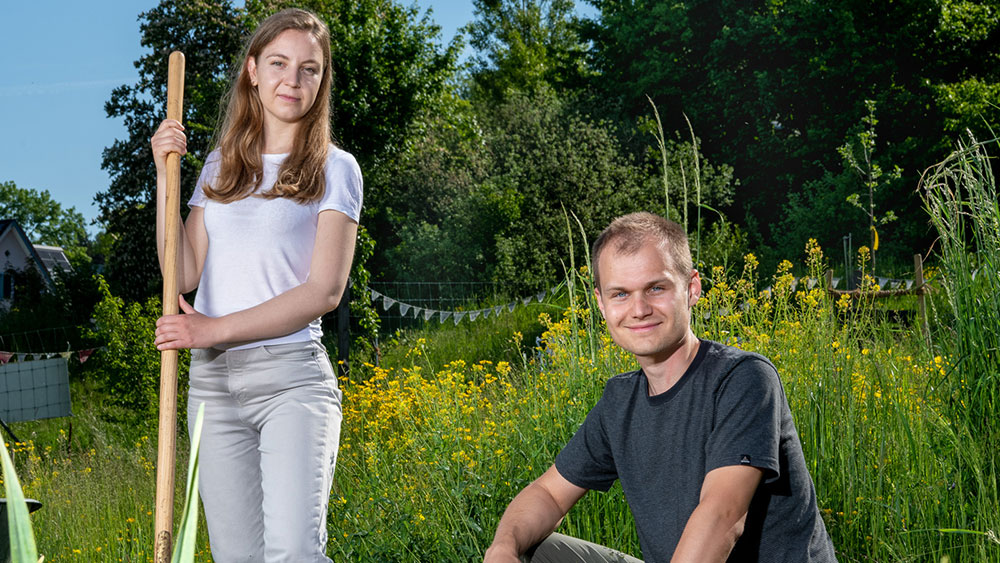 A strip of wild nature with hawthorn and blackthorn bushes. A mound of twigs for hedgehogs, insects and birds. Beds in which carrots, onions, leeks and a cornucopia of other vegetables grow. An herb patch replete with rosemary, thyme and the like. A self-built composting toilet, a cozy sitting area with a barbecue grill and a pen for two chickens named Beyoncé and Herbert. The affectionately dubbed "Strebergärtli" is a little green oasis of biodiversity on UZH's Irchel Campus. Students garden here on a good thousand square meters of soil together with people from the surrounding neighborhood.

The Strebergärtli sprouted into being a few years ago out of a sustainability initiative launched by UZH to "make Irchel Campus greener". Around 20 students have been regularly sowing, weeding, mulching and harvesting in the garden ever since. Even more take part in the workshops that the Strebergärtli crew organizes now and then – courses that impart useful knowledge on the subjects of gardening and vegetables, such as how to make chili sauce or pickle veggies.

Heirloom vegetable varieties are cultivated in the Strebergärtli whenever possible, and each harvest gets divided up between the keen gardeners. But the prospect of savoring fresh, self-grown vegetables isn't the only reason why the students throw themselves into gardening alongside their academic work. "Digging around in the soil is a nice contrast to doing brainwork at the university," says Strebergärtli co-president Leonie Laux, who studies earth system science at UZH.

And her colleague Dominic Tinner says, "I can mess around here for once in a really practical way with subjects that we cover theoretically in the course curriculum – such as the decomposition process in composting – without having to launch a research project." Tinner is the Strebergärtli managerial board member in charge of communication, and he moonlights from his day job as a biology student to earn money on the side as a nature filmmaker and photographer. But he can't entirely do without experimenting in the garden: he recently planted lentils, a novelty in the Strebergärtli. "Let's see how that turns out," Tinner says.

Vegetables, herbs, flowers, animals and handling them sustainably are important to the gardeners on Irchel Campus, who want their green oasis to make a symbolic impact that will resonate with people. They view their communal gardening work as a political commitment to environmental protection, sustainability and community building. The garden aims not just to lure insects to fill up on nectar here or to offer salamanders a new home in its recently excavated pond, but to also entice a wide spectrum of people from UZH and the surrounding neighborhood to learn something here that they can put into practice at home on their balconies or in their own gardens. "This way the Strebergärtli takes on an ecological aura that radiates far beyond its thousand square meters of greenery," Tinner says with conviction. "Our ecogarden aims to inspire people," Laux adds, "because sustainability issues often get forgotten in everyday life."

To the gardeners on Irchel Campus, nurturing biodiversity means not just dedication to protecting our environment, but also has a very specific, tangible benefit because skillfully cultivating biological diversity and planting heirloom varieties, which are often more resistant, keeps crop pests and diseases at bay. Although the Strebergärtli gardeners nonetheless have to wage a perpetual war against insatiable snails and slugs, their struggle is a little easier than it would be in a less diversified garden. 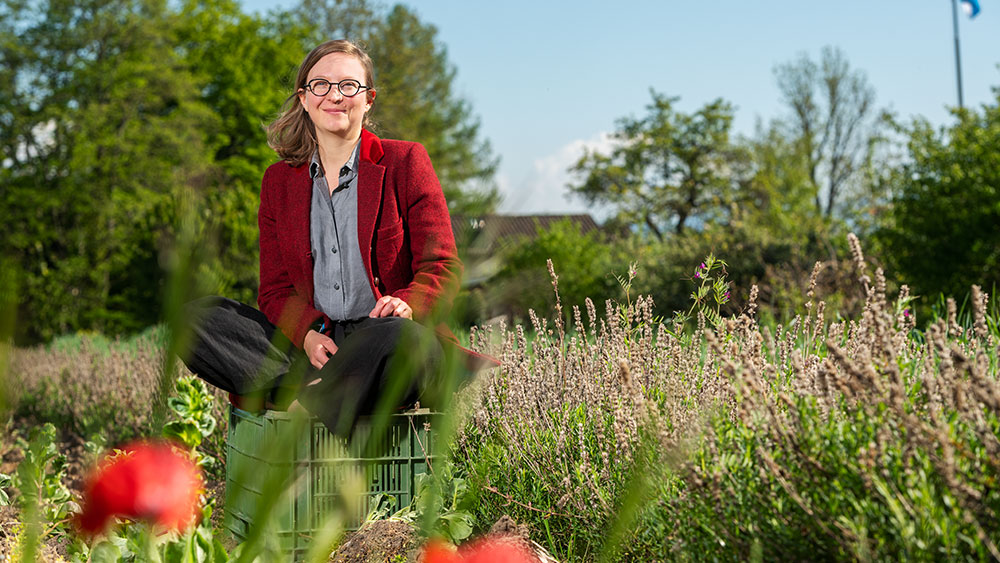 Claudia Keller, too, is a master at combating snails and slugs. The literary scholar in the UZH Department of German and Scandinavian Studies is a dyed-in-the-wool gardening activist. "The term 'biodiversity' is a political expression. Even if it used these days mostly descriptively," she says, "it is always infused with the idea of protecting our environment." Keller concerned herself with eighteenth-century gardening theories in her dissertation on Wolfgang von Goethe. "Even back then gardens were a political statement – think of absolutist France, for example," Keller says, "and it's no different today." The literary researcher is currently writing her habilitation thesis, in which the subject of biodiversity plays an important role, and part of her work at the moment is as a cultural scientist in the University Research Priority Program "Global Change and Biodiversity." Outside of work, she is actively involved in a Solawi, a community-supported agricultural cooperative. People join forces in Solawis to grow vegetables together in an environmentally friendly way for their own consumption.

Members of the Solawi each pledge to work four days a year in the cooperative’s fields, but they also hire professional horticulturists, who are responsible for maintaining the vegetable beds. And they work together with an association called "Natur im Siedlungsraum" (Nature in Residential Areas) that promotes biodiversity around the fields. In exchange, the Solawi members each receive a sack filled with seasonal vegetables every week. "That turned my menu plan completely upside down," Keller says. "Plants have gone from being a side dish to the main staple of my diet. What I get from the Solawi determines what I cook." That occasionally requires culinary ingenuity, especially in the winter when the supply of seasonal vegetables is scant. "A freezer and a Dörrex dehydrator to preserve vegetables were thus important acquisitions," Keller says.

The fields farmed by Keller's Solawi named Pura Verdura lie in Zurich's Balgrist neighborhood, where they are embedded in an urban landscape composed of allotment gardens and hospital buildings. Lettuces and salad greens, tomatoes and all other vegetables for the roughly 180 members of the Solawi are planted here. The concept of community-supported agriculture goes far beyond gardening for one's own consumption, in Keller's view. "The Solawi isn't simply about food self-sufficiency, it's not an escapist fantasy for societal dropouts," she says, "it's also about working on creating structures." Although everyone ought to take individual action, she explains, our pressing ecological and societal problems ultimately can only be resolved through structural change. "The Solawi provides possibilities to establish new practices," Keller says. Its members, for instance, not only spread compost fertilizer and learn scything techniques, but also create cost transparency through fair labor contracts and try out ways to distribute food equitably.

But gardening also has one entirely different facet for literary scholar Claudia Keller. She is staunchly convinced that gazing at the soil and contemplating the small things that abound there also changes the stories that we tell. She references in this context the American science fiction author and activist Ursula Le Guin, who developed a "carrier bag theory of fiction". Le Guin comparatively juxtaposed our ancestors' hunting and gathering and explored the connection between technology and storytelling.

"The tales about spear-wielding hunters were characterized by heroism," Keller says, "but if the action is gathering plants with a carrier bag, this changes the mode of narration." Starting from that thought, Le Guin worked on developing a narrative theory beyond male-dominated stories of heroism until her death in 2018. "Other relationships with the environment require other narratives," says Keller, who intends to conduct further research into contemporary narrative strategies in the context of biodiversity and ecology in her habilitation thesis.

She also plans to stay involved in the Solawi on the side. "I hope that the movement will continue to grow," Keller says, "and that cities will become denser but also greener in the future." Dominic Tinner likewise hopes that urban gardening will gain greater popularity going forward. "Even small garden plots can contribute to food security and bring people together, make them healthier and enhance sustainability," the biology student says. "That's something that should be encouraged." He adds that it makes him happy and even a little proud to eat vegetables that he grew himself.

Three book suggestions from Germanist Claudia Keller on the subject of literature and gardening:

Dancing at the Edge of the World

In her carrier bag theory of fiction, Ursula K. Le Guin ponders what practices are connected with which foods and how different the stories that get told about them are. The book is a great read that presents an ecofeminist perspective dealing with the affinity between gathering and storytelling.

Antiguan-American author Jamaica Kincaid recounts in this very intimate book how she developed her passion for gardening, showing in the process that taking delight in the beauty of gardens doesn’t rule out radical political thought, and vice versa.

Celebrated biologist and environmentalist Dave Goulson devotes himself in this book to the "tiny creatures" in our gardens, explains interconnections and seduces us to do the same. I like his humorous, but earnest way of prodding us to engage less in shaping and forming our environment and do more observing.

Dave Goulson: The Garden Jungle or Gardening to Save the Planet
London: Vintage, 2020.