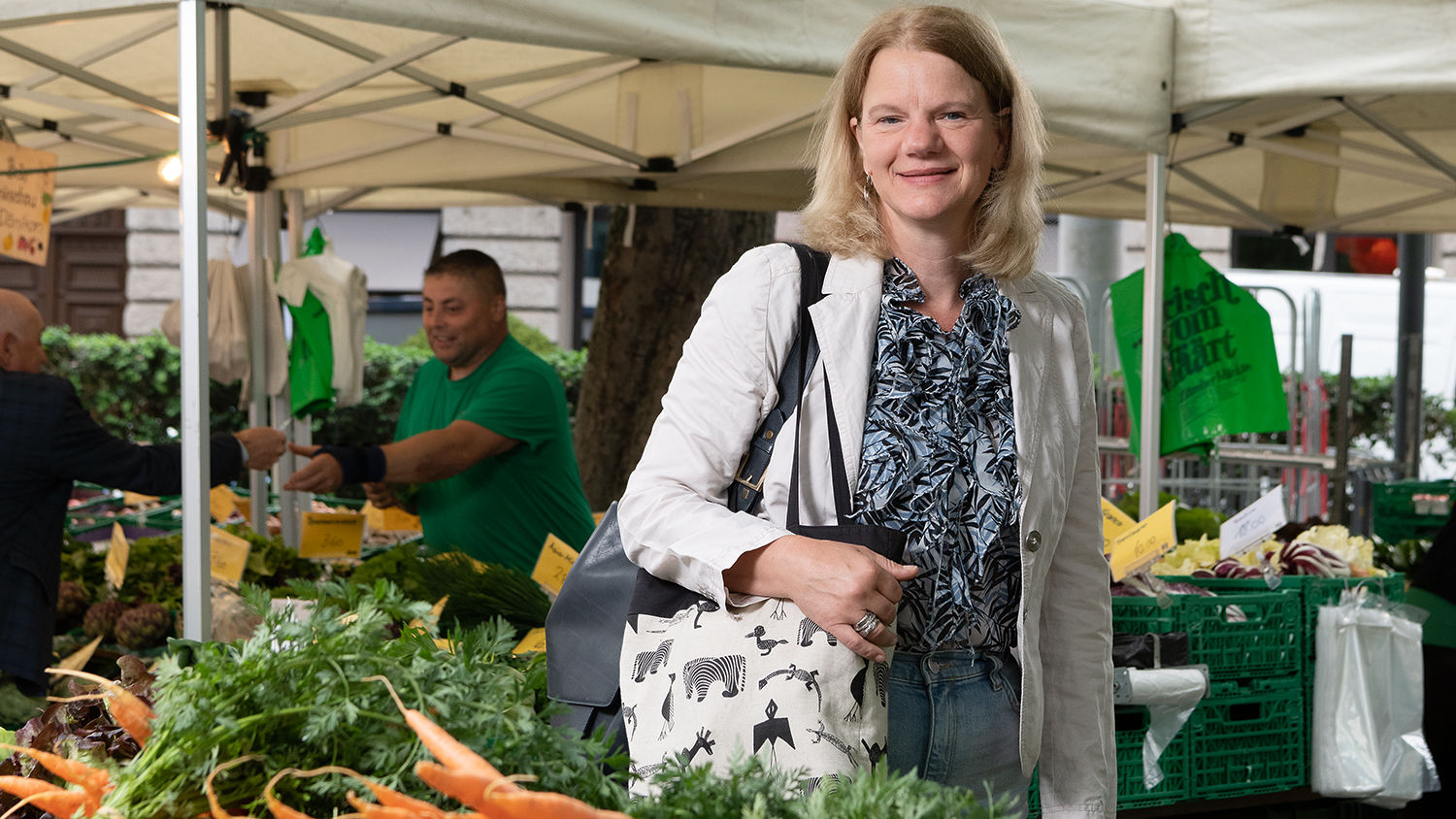 “We have to strike a new balance between keeping a healthy diet and ensuring food production is sustainable,” says Sabine Rohrmann. (Image: Ursula Meisser)

Sabine Rohrmann spent two years as a postdoc in Baltimore, where she carried out research at the Johns Hopkins School of Public Health. During this time, she lived in a predominantly white neighborhood that was next to a mostly African-American neighborhood. “The supermarket I went to for groceries was right in between the two neighborhoods,” recalls the nutritional scientist. Her first visit to the store was quite a shock. “Most of the groceries were highly processed, and there was very little fruit and vegetables.”

It wasn’t at all what she was after, but the other customers appeared to be happy with what was available. “I realized that this was a completely different world to mine.” She also realized that maintaining a healthy diet is very difficult if your local supermarket doesn’t stock healthy food items. This episode illustrates the fundamental issue that Sabine Rohrmann and other nutritional scientists like her are up against: “Many people’s eating habits are completely different from our recommendations. And many people struggle to change their habits.”

It doesn’t help that maintaining a healthy diet has turned into a highly complex matter, with environmental factors becoming an increasingly important part of the equation. Global food production accounts for 30 percent of our planet’s greenhouse gas emissions and 70 percent of freshwater consumption. It is a major driver of environmental destruction and climate change, and is pushing our planet to the brink. Put differently, we are living beyond our means by overexploiting and depleting our planet’s food resources.  This is an urgent problem, and we are all aware of it. It is also a formidable challenge for nutritional scientists. “We have to strike a new balance between keeping a healthy diet and ensuring food production is sustainable,” states Sabine Rohrmann.

Meat on the side

First and foremost, this means we need to start eating less meat. It is worth pointing out that we don’t have to banish meat from our plates completely. A meat-free diet requires a better understanding of nutrition, believes Sabine Rohrmann. “Meat can provide us with many essential nutrients, including protein, vitamins, iron and zinc.” If you want to live without meat, you need to know how to get these nutrients from other sources, and many people lack this knowledge, notes Rohrmann.

The nutritional scientist was a vegetarian herself for many years. The daughter of a butcher, she grew up in an environment in which meat was readily available. At some point, though, she lost her appetite for meat and turned vegetarian. And she stayed a vegetarian until a few years ago, when after a long hike during a holiday in the Cotswolds in England she ordered a steak in a pub – much to the surprise of her husband.  “What’s up with you?” he asked, to which she replied: “I feel like having steak.” And this has been her policy to this day. If she feels like it, she will treat herself to some lamb or venison or a steak. “We shouldn’t be too dogmatic when it comes to eating meat,” she says. “I think discussions about veganism are often too entrenched.”

For Sabine Rohrmann, sustainability and healthy nutrition need to be seen as two sides of the same coin. It doesn’t mean we have to avoid all food products that come from animals. This idea also corresponds to the recommendations made by the EAT-Lancet Commission on Food, Planet, Health, which brought together 37 world-leading scientists from across the globe. The commission, set up by the non-profit startup EAT and The Lancet medical journal, developed a diet that benefits both our own health and the health of our planet (see box).

However, even if we don’t cut out meat and animal products completely, our eating habits still have to change.  Most people consider meat the main event of a meal, while everything else on the plate is merely a side dish. This notion needs to be dispelled, with meat relegated to the status of a side dish that is only occasionally featured as part of a meal. Sabine Rohrmann knows this is a great challenge. After all, people are creatures of habit. And we often lack the knowledge needed to eat healthier and more environmentally sustainable food. “If you don’t know how a good lentil dish tastes, you’ll quickly give up if you don’t get it right the first time,” says the nutritional scientist. “Changing your diet takes patience and perseverance. It won’t happen overnight.”

Ideally, these skills should be included in the school curriculum as part of food literacy education. In other words, schools should not only teach our children to read and write, but also how to prepare a healthy and sustainable meal. In addition to theoretical knowledge about food, this should also include hands-on food skills and cooking lessons. The irony here, of course, is that cooking lessons are being scrapped in most schools, since a majority of education policy-makers believes the students’ time can be used for more important things. Considering that our health and the health of our planet is at stake, this kind of thinking is perhaps too short-sighted.

We too can do our part in the shift toward healthier, more sustainable eating habits. After all, what we eat is up to us. Nevertheless, business representatives and policy-makers also have a role to play. They have a decisive influence on what foods we produce. Rohrmann mentions the “butter mountains” and “milk lakes” that resulted from misguided government interventions, much like the mountains of surplus sugar that keep growing on the back of subsidies for sugar beet growers. “It’s nonsensical, since we’re already producing and eating too much sugar.”

Cheap raw materials like sugar exacerbate another problem that is caused by the food industry: the industry turns a handsome profit from highly processed products that are made with cheap ingredients and sold at high prices. These foods often contain too much sugar, fat and salt as well as preservatives and other ingredients that may make them taste good, but aren’t exactly healthy. Unfortunately, growing vegetables isn’t a very profitable business. And preparing and cooking them takes much more time and effort than shoving a ready-made lasagne into your oven.

So what does nutritional scientist Rohrmann think about shifting toward eating insects and plant-based fake meat products in the future? “From a nutrition science perspective, eating insects certainly makes sense,” says the UZH researcher. “They’re rich in protein, and growing them requires little energy.” However, she admits, she currently can’t imagine eating meal worms. She might be willing to try products made from processed insects, for example burgers, where the unfamiliar ingredients aren’t immediately obvious. Meanwhile, meat grown from animal cells in the lab is still too expensive. But if its appearance could be improved and the costs reduced, lab-grown meat may become a more popular choice for consumers, believes the nutritional scientist.

Plant-based meat could be an interesting option for people who may not be vegetarians but still want to limit the amount of meat they eat, or as an occasional alternative for vegans and vegetarians. The downside of meat made from plants, however, is that like other ready-made foods it is highly processed, with all the disadvantages mentioned earlier. “I don’t think it makes sense to put all this effort into changing natural products so that they resemble other food – like meat, in this case.” While she understands why people may occasionally turn to such products, Sabine Rohrmann recommends sticking with the real thing, for example lentils. “But lentils can’t always replace a steak,” adds the nutritional scientist.

This article first appeared in the dossier "Eating plants" in the  UZH Magazin , issue no. 2, 2022.

The planetary health diet developed by the EAT-Lancet Commission recommends eating double the amount of fruits, vegetables, nuts and legumes, while reducing consumption of foods such as meat and sugar by more than half. However, simply changing our diets won’t be enough. Global food production must also become more environmentally sustainable, and food loss and waste need to be reduced. The measures proposed by the EAT-Lancet Commission show that it is possible to provide healthy food for 10 billion people without destroying our planet. More Information