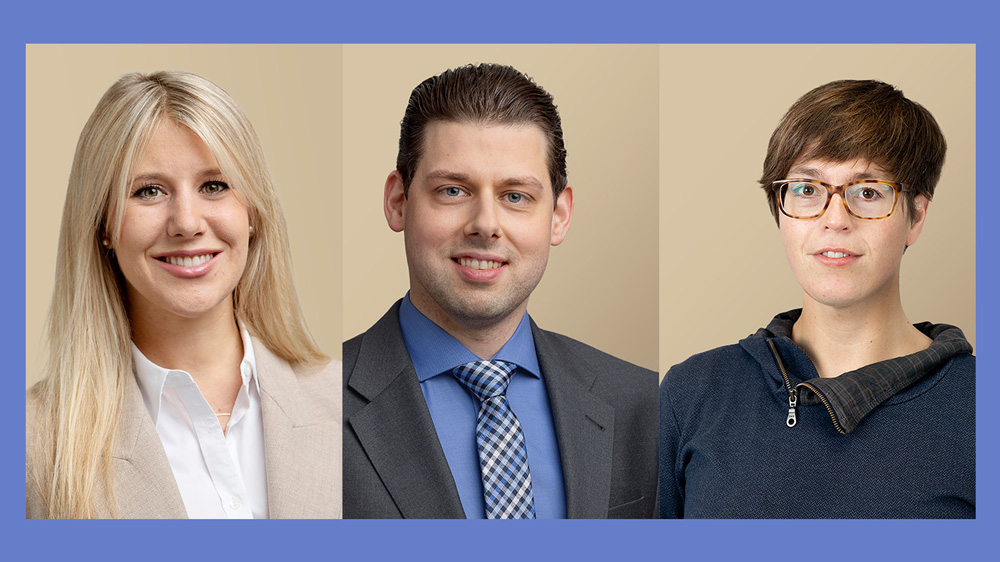 Original, interdisciplinary, relevant for society and based on first-rate science – these are the distinguishing features of the research carried out by veterinarian Kira Schmitt, legal scholar Michael E. Meier and social and cultural anthropologist Mascha Schulz. Each of the three junior researchers have won a FAN Award for their excellent scientific work. The awards are handed out annually by the “Fonds zur Förderung des akademischen Nachwuchses” (FAN) following nominations made by the UZH Graduate Campus.

The Covid-19 pandemic has momentarily dwarfed another global issue: the growing pandemic of antibiotic resistance. The United Nations has declared antimicrobial resistance (AMR) to be the most serious and urgent global threat. Each year, some 700,000 people die as a result of antimicrobial resistance. Preventing and controlling infections is thus becoming more important than ever before.

Many small animal clinics provide treatments and surgeries that are similar to those performed on humans, and this means that the risks of developing and spreading antibiotic-resistant germs are also the same. The research project of Kira Schmitt, this year’s FAN Award winner in the field of medicine and the natural sciences, demonstrates that outbreaks of multiresistant bacteria are on the rise in small animal clinics. “After visiting a hospital, small animals may carry antibiotic-resistant microorganisms back to their owner’s homes and spread them to humans,” the veterinarian explains. Her research is the first to show that the same germs spread between the pet owners, the animals, the veterinary hospital and household surfaces.

In addition, she evaluated a key measure that prevents the spread of AMR in animal clinics – hand hygiene. To do this, she compared two evaluation tools and examined the microbiological contamination of hands as well as the use of gloves. Her findings suggest that wearing gloves may lead to reduced hand hygiene and that hand hygiene needs to be improved urgently. As part of her research project, she also developed a concept for hand hygiene in small animal clinics, which she is currently helping to implement in various clinics by training staff and analyzing the effects of such concepts for the first time. She aims to use the collected data as a basis for developing statutory minimum hygiene requirements and an accreditation system for veterinary clinics.

Around 4.5 million employees in Switzerland are insured with a pension fund. Occupational pensions have been governed by the Occupational Pensions Act (OPA) for the past 37 years. A key feature of this act is the “Obligatorium”, which refers to the minimum requirements for mandatory occupational benefits provision. However, most people are insured “überobligatorisch”, i.e. above the statutory minimum stipulated in the OPA.

How these non-mandatory benefits are handled is at the discretion of pension funds. As a result of long-term developments – including higher life expectancy and lower interest rates – it has become common practice for pension funds to “credit” the more extensive benefits to the mandatory

pensions. While the minimum requirements per the OPA are met, parts of the more extensive pension provision are in turn offset against the mandatory minimum benefits, which is known as the credit principle (“Anrechnungsprinzip”). The development and permissibility of this practice at the intersection of mandatory and non-mandatory benefits is the focus of Michael E. Meier, senior teaching and research assistant at the Faculty of Law.

“The credit principle results in some insured persons receiving fewer benefits than they would have expected based on their more extensive pensions coverage,” states Meier. Recently, the Federal Supreme Court merely ruled that the mandatory minimum had to be paid out in any case – even if this is done through crediting benefits above the statutory minimum. However, this leaves the more extensive occupational benefits largely unprotected. According to legal scholar Meier, many insured employees and their employers, who pay half of the contributions, have rightly been asking whether it is permissible for mandatory benefits to be cross-subsidized in this way, particularly since people chose to have non-mandatory benefits with the goal of receiving more than the bare minimum of benefits.

Meier has already received the “Prix d’excellence” of the Swiss Association for Liability Law and Insurance Law as well as the “Professor Walther Hug Prize” for PhD theses, and he has now also been presented with this year’s FAN Award in law and economics

Bangladesh is often depicted as a deeply religious country, where secular and non-religious positions only make headlines in extreme cases – for example a few years ago, when a series of attacks on atheist bloggers unfolded. In the context of the increasing worldwide fear of Islamist terrorism, international media viewed these events as proof that Bangladesh was increasingly in the grip of radical Islamists. In stark contrast with such simplified views, Mascha Schulz explored in her PhD thesis what it means to be secular, atheistic or critical of religion in Bangladesh. The social and cultural anthropologist discovered that these extreme events need to be understood against the backdrop of political events unfolding at the time.

“Secularism is very present in Bangladesh, and irreligion is by no means extremely rare,” explains the researcher. “And yet, it is rare for people to explicitly identify as atheists, since society tends to view this negatively.” According to Schulz, many Bangladeshis instead self-identify as non-practicing Muslims or non-practicing Hindus. Her research also revealed that people’s views aren’t fixed, but vary depending on context. For example, some professed non-believers might attend Friday prayers in the mosque or observe Ramadan as a way of showing their respect for the older members of the family or community.

Schulz’s thesis is focused less on what people say about their beliefs and more on their actions in everyday life. At the same time, she analyzed current social structures as well as local power structures, and challenged general assumptions on secularism. To conduct her ethnographic fieldwork, Mascha Schulz spent a considerable amount of time in Bangladesh, benefiting from her excellent knowledge of Bengali language and culture. For her PhD thesis at the Department of Social Anthropology and Cultural Studies, Mascha Schulz has now been awarded the FAN Award in the arts and social sciences

The FAN Awards for junior researchers recognize outstanding scientific achievements of advanced PhD candidates and early postdoctoral researchers at UZH.  The awards are handed out annually by the “Fonds zur Förderung des akademischen Nachwuchses” (FAN) of UZH Alumni. The Graduate Campus nominates the award winners in three fields: The arts and social sciences, law and economics, and medicine and the natural sciences. The awards, which are presented at a public awards ceremony hosted by the Graduate Campus, come with prize money of CHF 5,000 each.