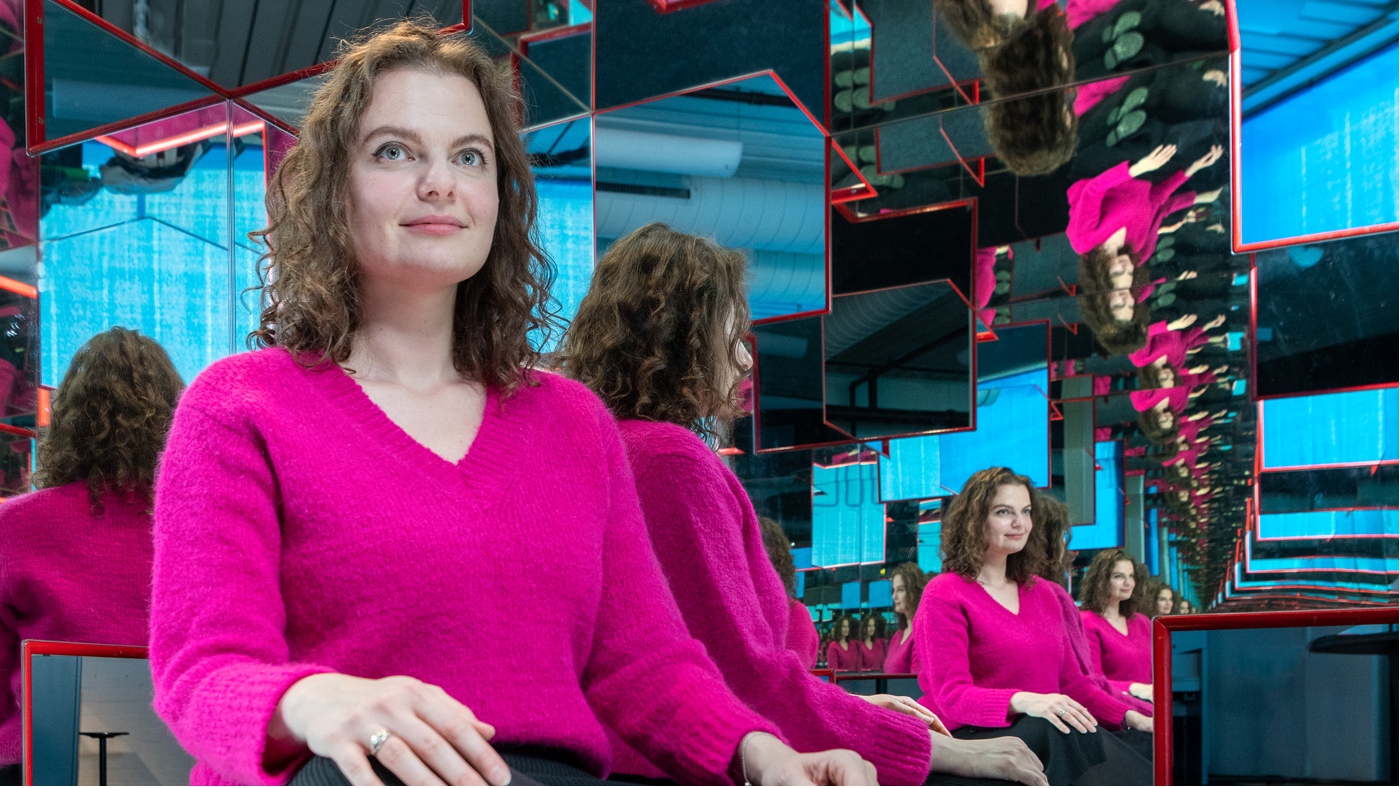 “We should be helping users to understand the principles of the technology,” says Liudmila Zavolokina, pictured here in Technorama Winterthur. (Picture: Ursula Meisser)

There is no end to the blockchain hype. The value of cryptocurrencies that are based on it, such as Bitcoin and Ether, has topped the two-trillion-dollar mark, double what it was a year ago. Cryptoart is the latest thing on the art market, with purely virtual works fetching millions at auctions last year. It seems there is a new blockchain application practically every day.

Most people are as mystified by what's behind this seminal technology as they are by the inner workings of the self-driving car. The best way to describe blockchain is to use the accounting analogy. Let’s take the main ledger, as is familiar from double-entry bookkeeping. As in accounting, blockchain stores all transactions locally in digital form as part of a wider system.

Since all of the entries are linked, any manipulation would be immediately obvious. Blockchain is seen as fraud-proof, and promises new services independent of private and public-sector players in areas such as finance, logistics, insurance, authentication or, indeed, art.

Trust and mistrust
At UZH, information systems analyst Liudmila Zavolokina is one of a team investigating the complex algorithms that have the potential to turn today’s business relationships on their heads. As part of UZH's Digital Society Initiative, Zavolokina analyzes the trust aspect of this versatile technology. That may seem counter-intuitive. After all, blockchain creates a tamper-proof environment in which there should be complete trust between those concluding transactions.

“Blockchain is not some magic remedy for mistrust,” says the researcher. “We still have to believe in the algorithms, the IT specialists and the other participants – and in some cases also the institutions that provide the system in the first place.” Another factor is that blockchain applications do not have any central organization that can be held to account. That makes it impossible to sanction fraud, Zavolokina adds. Most people, however, expect a system in which given individuals or institutions can be held liable.

It is here that the 32-year-old scientist has found her ideal research field. Liudmila Zavolokina comes from a family of physicists in Moscow, but decided to “rebel,” as she puts it, by studying mathematics. She then worked in Russia for an Italian software company, where she developed a growing fascination for the issues that arise at the nexus of IT and business.

Having decided to pursue a PhD, on the recommendation of her former boss Zavolokina set about finding a job in Switzerland. She joined the Department of Informatics at UZH in 2015. Now a postdoctoral researcher with the Digital Society Initiative, she is a member of the Blockchain Center (see box) and examines how decentralized digital platforms might serve the public.

One visionary application concerns the market for second-hand cars, where trust is crucial. Could forgery-proof blockchains dissipate potential buyers’ suspicions about used car dealers? For her PhD thesis, Zavolokina worked with three other doctoral candidates under the supervision of Gerhard Schwabe, professor of information management, to set up a special platform.

Developed in cooperation with the auto and IT industries, the blockchain contains all of the important information and events in the vehicle’s lifecycle. Everything is stored digitally, from first registration to final scrappage, including repairs and changes of ownership. The system involves all of the major stakeholders, including importers, workshops, online marketplaces, insurance companies, banks and cantonal traffic offices.

The “Cardossier” platform has been ready for two years now. “At first it was hard to get our partners to commit, because they weren’t all willing to share information and data with competitors,” Zavolokina recalls. There are now 25 members and over 11 million vehicle entries. The project offered the perfect vessel for her research into trust. One of the first things she established was the need to build belief in blockchain technology. There are three decisive factors here, she says: performance, process and purpose. In other words, blockchain must do what is expected of it, and its mechanisms and objectives must be clear.

Avoid detail overload
Zavolokina explains that how a blockchain application performs depends heavily on the quality of data that it is fed. This must be entered and recorded without error, whether intentional or not. There might be an incentive for a workshop, dealer or insurer to “forget” a repair, for example. “That’s why the data needs to be checked, reviewed and approved, perhaps by a third party,” she asserts. Automating data entry would help to reduce the risk of human error or manipulation.

The second aspect concerns the complexity of blockchain technologies and their complicated concepts such as proof of work, cryptographic hash functions and smart contracts. Zavolokina believes explaining these processes in detail could be counter-productive. “We should be helping users to understand the principles of the technology, without overloading them with detail,” she cautions.

Where purpose is concerned, the benefits of blockchain must be put into context. In theory, the technology eliminates the risk of intervention, but emphasizing this might give the impression that other users and stakeholders could be acting with malicious intent. Paradoxically, by highlighting the very thing they are intended to stop – the risk of fraud – blockchain applications may end up scaring off potential users. Claudio Tessone at the University of Zurich Blockchain Center expands: “Trust in a blockchain application is a fairly abstract thing. You don’t have to trust every individual participant. The network is greater than the sum of its parts, and that gives you a certain security.”

This article first appeared in the UZH Magazin 3/22.

Launched in 2017, the University of Zurich Blockchain Center is a cluster of over 50 researchers, including 20 professors drawn from multiple faculties. “Blockchain applications can only be analyzed from an interdisciplinary perspective,” says academic director Claudio Tessone.

In his view, this takes specialists from a range of areas such as informatics, business, finance and law. The center’s activities are aligned closely with the needs of society, and it sees itself as a contact point for industry partners and political decision-makers. “Our research is very application-focused, and benefits from our contacts in the CryptoValley ecosystem around Zug,” he continues.

The center supports research projects, such as the global collection of transaction data from multiple blockchains and analysis of its macroeconomic properties. It also offers customized education programs. In just five years, the center has already made an international name for itself. What’s more, thanks to the Blockchain Center, industry information platform CoinDesk rates UZH as the best blockchain university in Europe. It stands fourth globally.