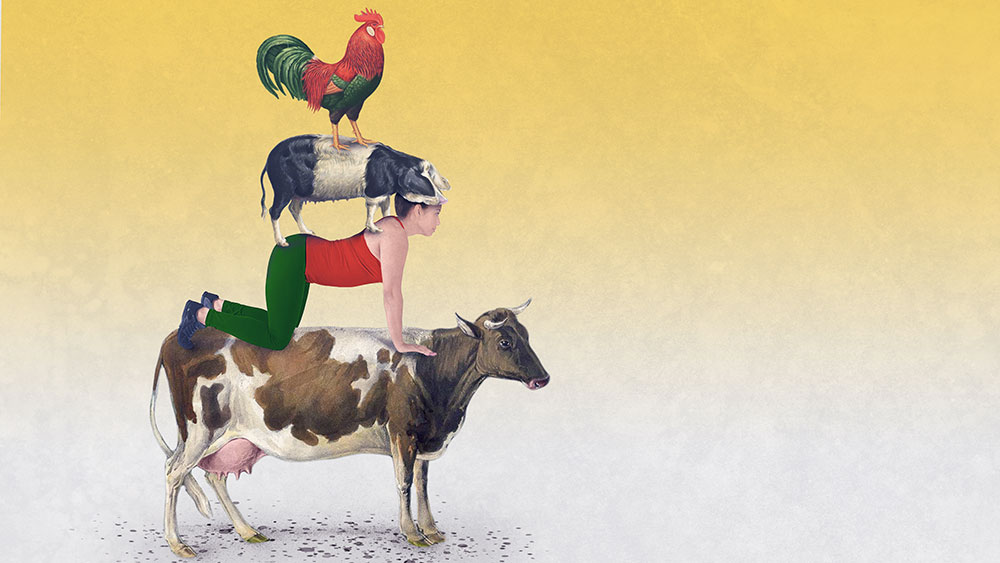 Town Musicians of Bremen
The health of humans and the health of animals are interconnected – and must thus be investigated using an interdisciplinary approach. (Image: Illustration Julia Geiser)

The Covid-19 pandemic has demonstrated how new pathogens can paralyze entire societies. Assuming that it isn’t a human-made virus that escaped from a lab, the novel coronavirus evolved naturally from the same processes that have accompanied humankind for millennia. Ever since humans and animals started living in close proximity to each other, there have been germs that have passed from animals to humans and, more rarely, vice versa.

Thanks to modern antibiotics, many of these germs are no longer as scary as they used to be. And yet, rampant bacterial resistance to antibiotics is causing us serious problems. In Switzerland alone, every year several hundred patients succumb to infections caused by bacteria that are resistant to antibiotic treatment. Such resistances emerge from a complex interplay between humans, animals and the environment. To fight them effectively, veterinarians and physicians need to work together more closely, says Roger Stephan, dean of the Vetsuisse Faculty. This idea is known as One Health. The health of humans and the health of animals are interconnected – and must thus be investigated using an interdisciplinary approach.

The University of Zurich has included One Health in its strategic priorities. Many UZH researchers are already working successfully in this field, as the dossier section of the current UZH Magazin shows. Veterinarian Barbara Willi, for example, has discovered that antibiotic-resistant bacteria in animal clinics not only spread easily among cats and dogs, but may also jump over to their owners. That’s why she recommends washing your hands after every contact with pets.

Using antibiotics as sparingly as possible may slow down the formation of resistances – but it won’t stop them altogether. That’s why new drugs are needed. Chemist Oliver Zerbe is currently developing a new class of antibiotics capable of eliminating resistant bugs with the UZH startup Polyphor. Another bright idea comes from urologist Thomas Kessler: He wants to artificially produce bacteriophages, specialized viruses, that destroy dangerous pathogens.

The current pandemic is not yet over, and yet UZH researchers are already exploring new, potentially dangerous pathogens that could cross over from the animal kingdom. Cornel Fraefel, head of the Institute of Virology, and his team have shown that bats in Switzerland may also harbor such viruses. Along with many other One Health experts, the virologist has called for additional monitoring programs for wildlife and farm animals to reduce the risk of new zoonotic diseases – including in Switzerland.

Other topics included in this issue: Researchers at the Department of German Studies have edited texts created by Robert Walser, the great Swiss writer, in microscopically small handwriting. Engineers and IT specialists at the Department of Neuroinformatics are developing a neuroprosthesis that could give blind people back some of their eyesight. And in our portrait, sociologist Katja Rost explains why future managers should be chosen by drawing lots.