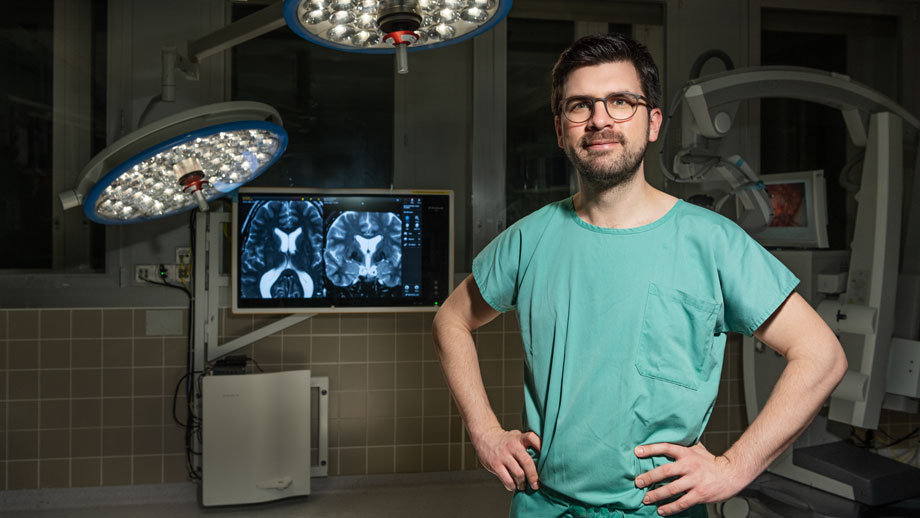 Marian Neidert
Neurosurgeon Marian Neidert hopes that in 20 or 30 years, he’ll no longer have to saw skulls open, thanks to immune therapies that fight brain tumors. (Image: Ursula Meisser)

In the jargon it’s called “opening up the head”. Make an incision through the scalp and fix it with spreaders. Drill a hole in the skull and use the saw to cut out an access opening. Open the dura in a horseshoe fashion and fold it to the side. Now the brain is exposed. “That was a fascinating moment for me the very first time, and it still is,” Marian Neidert explains. “The aesthetic of the pulsing brain. The awe and respect you experience when seeing this organ. It controls everything that makes us what we are – our thoughts, our actions, our being.” Before Marian Neidert reaches for the scalpel, he plans the procedure the way a pilot plans a long-haul flight. He analyzes images, sets waypoints and works out strategies. This is particularly important when tumors touch important functional centers. There precautions are needed, for example electrical stimuli indicating proximity to important structures such as motor pathways, and fluorescent dyes, ultrasound or intraoperative MRI to make the tumor more clearly visible.

If the tumor is near the speech center of the brain, the patient remains awake during surgery, with speech therapists and neuropsychologists talking with them so that the surgeon can respond in time as needed. Operations on the human skull are tricky. Unlike many other types of tumor, brain tumors are barely distinguishable from healthy tissue, making them hard to detect even under a surgical microscope. It goes without saying that this doesn’t make the job of removing as much of the tumor as possible without damaging healthy tissue any easier for the surgeon. “That’s the great balancing act,” explains Marian Neidert. “Whether I take out too much or too little, it’s prognostically bad in brain surgery.”

OP under the microscope

So precision is everything. Brain surgery is done under the microscope, often with the help of so-called neuronavigation, a kind of GPS for locating the intervention with millimeter precision. Scalpels are no longer used for actual brain tissue as they cut too crudely. Surgeons tend to use tiny suckers and bipolar forceps with electrodes that can be used to occlude blood vessels. Or they use an ultrasound aspirator that simultaneously pulverizes, flushes and aspirates the tumor tissue. Superficial tumor surgery takes up to two hours, while more complex procedures, for example at the base of the skull, often last for more than 10. Marian Neidert’s longest operation went on for 16 hours.

Only benign brain tumors such as meningiomas, which form from the cells of the membranous layers surrounding the brain, can be permanently cured in this way. Malignant brain tumors such as glioblastoma, or metastases that originate from cancer sites elsewhere in the body, are virtually impossible to cure permanently with surgery. Here the surgeon can reduce the tumor mass, and radiation and chemotherapy can be used to slow the growth of the remaining tissue, but in most cases it can’t be brought completely to a stop. This is because despite all the progress in cutting-edge medicine, surgery simply isn’t precise enough for the brain.

The only thing that is precise enough is our immune system. “As a surgeon, I’ll never rival the precision of immune cells,” says Marian Neidert. This is one of the reasons why already as a student he started to take an interest in the potential of the human immune system – in other words the possibility of using the body’s own substances to stimulate immune responses enabling healing with pinpoint accuracy. Now Neidert, a privatdozent at the University of Zurich, is well on track to this goal. Together with specialists in neurosurgery and neurology at UniversityHospital Zurich and researchers at the University of Tübingen and St. Gallen Cantonal Hospital (where Neidert is deputy chief resident), he’s already created an initial framework for at some point being able to stimulate immune cells to finish off malignant brain tumors. “This is no one-man show,” explains the neurosurgeon. “It requires a lot of cooperation and a strong team.”

First, Marian Neidert joined forces with the University of Tübingen, where he started out as a medical student, to draw up an atlas of all the immunopeptides in healthy tissue. These peptides are antigens that enable a cell’s state of health to be ascertained (see box). The peptide atlas currently lists some 230,000 peptides from around 30 types of tissue; it’s now available to researchers around the world online. The atlas can be used to identify diseased cells by a process of exclusion. “This way immune therapy will only attack tumor cells, but not healthy tissue,” says Neidert. So the atlas helps makes therapy safer as well as allowing tumor-specific peptides to be rapidly found.

The most malignant of all

Second, Neidert uses his primary profession as a surgeon as an opportunity to drive the research forward: In addition to the tissue samples taken on a routine basis for histological analysis, each time he does surgery he also takes pieces of the removed tumor tissue for research – naturally only with prior consent of the patient and the cantonal ethics committee. “I take samples from different areas of the tumor and place them on a specially prepared sterile table in the operating room,” explains Neidert. Part of the samples are then analyzed fresh, while part are put on ice or deep-frozen for subsequent examination.

Back in the lab, Neidert swaps his surgeon’s cap for his researcher’s hat, comparing the peptides in the tumor samples with those in the atlas of healthy peptides. He adds the samples identified as “sick” to cell cultures so that he can determine whether they are recognized and possibly activated by immune cells – in other words, whether an immune response takes place. If this is the case, the peptide will function as an antigen. However, a single antigen on its own is not enough for successful immunotherapy. “Brain tumors are heterogeneous,” says Neidert. “So we look for as many suitable peptide sequences as we can find – whole lists of antigens, or an antigen cocktail.”

Not all cells in brain tumors are alike. Alongside short-lived varieties, there are long-lived tumor stem cells, “the most malignant of all,” as Neidert describes them. The regions of a tumor also differ depending on their activity. “Our goal is to remove the main mass of the tumor in surgery, and then use immune therapy to keep the tumor in check in all other zones.” In the next few years, he’ll be using an appropriate combination of classic surgery with the novel therapy. Mechanical intervention can’t always be avoided. All too often, growing pressure in the brain or loss of key bodily functions make it necessary to operate immediately.

Whether used postoperatively or as an alternative to surgery, Neidert gives immunotherapy in the neuronal field good chances. The requisite peptides could be manufactured chemically and used as a therapeutic vaccine. However, this would involve tricking the blood-brain barrier, which has a filter separating the central nervous system from the rest of the bloodstream. This means that injecting the patient with antigens through the skin or in one of the usual veins of the body is hardly going to work. A more effective method would be to work in the lab, using peptides to train immune cells from the patient for immunity and then re-implanting them directly in the tumor cavity through a cannula.

But both these things are still a distant reality. It will be another year or two before the first clinical trials commence. And it will be significantly longer before immunotherapy for brain tumors finds its way into applied oncology. “Above all, we have to find out how to streamline what is a highly complicated analytical procedure,” says Marian Neidert. “Determining the antigens still requires a huge amount of work and logistical effort.” The aim would be to eliminate everything that’s not absolutely necessary in terms of routine clinical practice. Only then would immune therapy for brain tumors be suitable for mass use. And even if it is at some point, will the branch which Neidert is now sitting on and sawing at eventually break off? After all, he earns his living with highly specialized brain tumor surgery, and already has more than a thousand procedures under his belt. Neidert smiles and shakes his head. “If it really does get to the point that I have to operate on fewer tumors and my contribution is limited to taking tissue samples and treating tumors via cannulas, that’s something I can certainly live with. In fact, it’s my wish that in 20 or 30 years’ time, surgery of that sort will no longer be needed, and that my grandchildren won’t believe me when I tell them that I used to saw people’s heads open to work on their brain.”

Window into the cell interior

Peptides might be tiny and unassuming-looking, but they play a crucial role in immunotherapy. They’re fragments of proteins that form inside the cells of the body. Peptides are presented on the surface of each cell containing a nucleus, where they are scanned by the receptors of our immune cells. If a tumor produces abnormal protein, this also shows up in the peptides, and the immune cells know where they have to take action. “To an extent the entirety of peptides provides a window into the immune system,” explains neurosurgeon Marian Neidert.

Tumor-specific peptides can be used as antigens and are therefore welcome candidates for immune therapy. However, finding suitable peptides involves a time-consuming comparison with all the healthy peptides that inhabit the cells of our body. Once peptides typical of the brain tumor are found, the immune system can be trained to recognize and eliminate the corresponding “sick” cells, and ultimately the entire tumor tissue. “The idea is that our body produces immune cells itself to destroy the tumor cells in the brain with pinpoint accuracy,” says Neidert.

The "Fonds zur Förderung des akademischen Nachwuchses" (FAN) supports brilliant young researchers at UZH. Backed by UZH alumni, the fund helps innovative junior researchers to hone their research profile, with its grants designed to enable them build a reliable foundation for an academic career. FAN has been in existence for 22 years. In this time it has provided more than CHF 11 million in funding to 171 researchers.