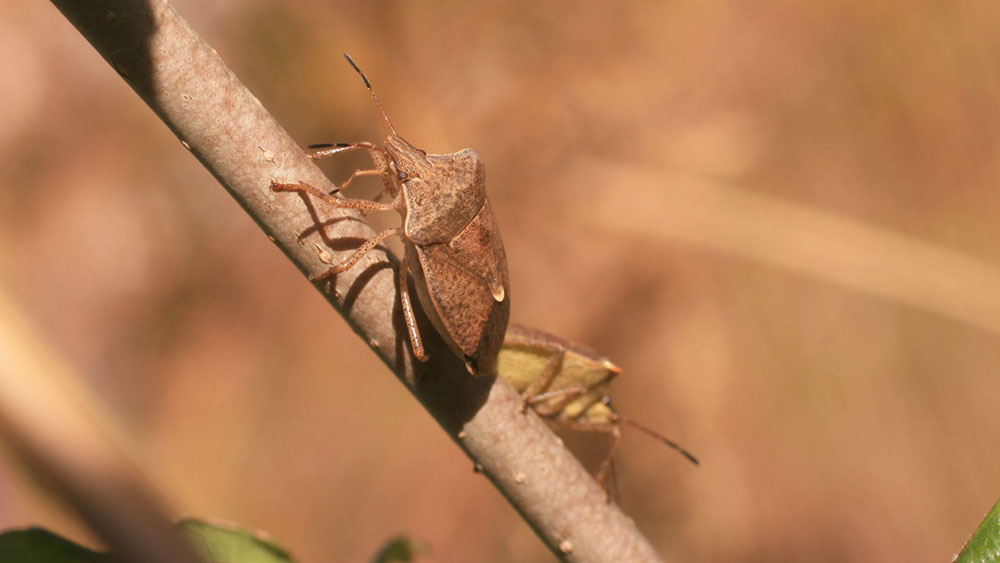 Baumwanze
The natural substance thanatin produced by the tree bug is the basis for the development of a new antibiotic at UZH. (Image: iStock / nrpphoto)

Persistent bacterial infections are part of Thomas Kessler’s daily life. The UZH professor of medicine and physician at Balgrist University Hospital treats patients with paraplegia, multiple sclerosis or other neurological conditions. Because they cannot empty their bladders completely, such patients suffer from frequent bladder or urinary tract infections, often chronic, as bacteria can proliferate in the residual urine.

While preventive measures such as regular bladder lavage can help avoid such infections, they are not always successful and the only remaining option is antibiotic treatment. But recently the urologist has often had to reach to the back of the medicine cabinet for the reserve antibiotics kept for emergencies – the infections are increasingly caused by multiresistant bugs that do not respond to first-choice antibiotic treatment. “If such infections go untreated, they can lead to blood poisoning, which can be fatal,” says Kessler.

Reserve antibiotics can usually prevent the worst from happening, but even they are not always a magic bullet. Around 300 people in Switzerland die every year from treatment-resistant bacterial infections; worldwide around 700,000 people died in 2018, according to an estimate by the Mahidol Oxford Research Centre in Bangkok. These figures are rising year on year, and the outlook painted by the 2016 O’Neill Report is bleak. According to the report commissioned by the British government and others, by 2050 more people will die of non-treatable multiresistant bacteria than of cancer or heart disease. Deaths could number around 10 million per year.

“This estimate is based on what happens if we do nothing to tackle the increased resistance,” says Markus Seeger, professor of microbiology at UZH. He is convinced that this nightmare scenario can be avoided, but only if we invest in developing new active agents today. Seeger’s research at UZH examines how small fragments of antibodies (nanobodies) can be used to target resistant tuberculosis bacteria, among others.

He and fellow researchers are also developing a novel testing process to speed up identification of resistant harmful germs using nanobodies. The basic research leading to this development was done under the auspices of the national research program 72, “Anti-Microbial Resistance,” of which Seeger and his team are members. “Ideally our method will enable doctors to administer the correct antibiotic more quickly in future,” says Seeger. Rapid diagnosis in cases of infection with life-threatening multiresistant germs could be the difference between life and death.

Harnessing the power of stink bugs

Drug resistances largely develop due to overuse of antibiotics. It is therefore vital that we use them as efficiently and sparingly as possible in order not to lose more ground in the fight against dangerous microbes. In addition, we need completely new drugs capable of eliminating resistant bugs. That’s what UZH chemist Oliver Zerbe is currently developing with the UZH startup Polyphor. Zerbe is working on a whole new class of antibiotics known as OMPTAs (Outer Membrane Protein Targeting Antibiotics). This new type of antibiotic was discovered by UZH chemist John Robinson (now professor emeritus) together with Polyphor.

Until now, scientists had three strategies to keep harmful pathogens at bay with antibiotics: Inhibit the construction of the bacterial cell wall; disturb the metabolism of protein and folic acid that is vital to the cells’ survival; or damage the genotype so that the bacteria cannot propagate further. The new mechanism now discovered at UZH targets another weak point of Gram-negative, pathogenic bacteria – their outer membrane. In contrast to Gram-positive pathogens, the outer layer of Gram-negative bacteria consists of an inner and an outer membrane surrounding the cell wall. The agents discovered by Robinson, and which Zerbe is now advancing, block the protein bridge that links the interior of the cell to the vital outer membrane, preventing it from developing and thus eliminating the bacterium.

The first agent developed according to this principle by John Robinson together with researchers from Polyphor was Murepavedin. It successfully destroyed the mulitresistant bacteria Pseudonomas aeruginosa, which is widespread in hospitals and causes lung and urinary tract infections. Such infections can be deadly, especially in patients with compromised immune systems. The bacteria is one of the twelve multiresistant “superbugs” that the World Health Organisation (WHO) considers to be a particular concern and threat. New drugs are urgently needed to fight these superbugs.

But despite its early promise, Murepavedin will not be one of them – in the end it didn’t work. After positive results in the first and second round of clinical trials, the researchers had to abandon their high hopes for the new antibiotic in the third and final phase. While Murepavedin did destroy the bacteria, it also damaged the patients’ kidneys. The researchers haven’t completely given up yet: They are currently investigating whether the drug could be administered as an inhalation spray with less harmful effects.

Meanwhile, structural biologist and chemist Oliver Zerbe is already working on a new OMPTA agent together with Polyphor. His research concerns another discovery of UZH chemist John Robinson: Thanatin, a naturally occurring antibiotic produced by stink bugs. The drawback is that it is poisonous for humans. The research team is now working on developing a similar substance that works in the same way but is less toxic. Of course, it may be that this project also leads to a dead end during the clinical testing phase like the earlier one. “That would certainly be a shame,” says Oliver Zerbe, “but identifying a new mechanism is in itself a significant step.” Sooner or later new antibiotics will be created based on this research, believes Zerbe.

Another bright idea – if not completely new – for successfully treating persistent bacterial infections came from urologist Thomas Kessler. Alongside his clinical work with patients at Balgrist University Hospital, Kessler conducts research at UZH into antibiotics, trying to find new ways out of the bacterial resistance crisis. He came across a long known but rather neglected therapeutic method: Treating infections with bacteriophages. Bacteriophages – which literally means bacteria devourers – are viruses that specialize in destroying certain bacteria. They get into the bacterial cells and use the cells’ own replication machinery to proliferate and then invade and kill other bacteria. Bacteriophages, or phages for short, occur in abundance in nature as well as in our bodies.

Thomas Kessler has now launched a phage research program in Switzerland. Working with colleagues at ETH, UniversityHospital Zurich and Inselspital in Bern, Kessler’s aim is to produce phages that specifically target disease-causing pathogens. “The advantage would be that they work specifically against particular germs,” says Kessler, “and thus cause fewer side effects.”

But he’s not content to stop there. Kessler has also enlisted the support of fellow UZH professor of medicine Onur Boyman, a specialist in the human immune system. Kessler’s vision is that the artificial phages could be used not just to destroy the harmful bacteria, but at the same time to strengthen the patient’s immune system and better protect them against further infections. That is the subject of his current research as part of the flagship project ImmunoPhage under the University Medicine Zurich research consortium. “On paper, the new approach already works optimally,” says Thomas Kessler. Whether it will also work in reality is another matter, he admits. The first clinical studies are planned next year.

Evidently, there is no lack of interesting avenues for new drugs and treatments. But the development of novel antibiotics is not just a scientific challenge, but also an economic one. Antibiotics are not very profitable for pharmaceutical companies. While society urgently needs new drugs to tackle persistent bacteria, they must be used as sparingly as possible to prevent resistances to the new drugs from forming.

That flies in the face of the economic interests of companies whose goal is to maximize sales figures. “New incentives are needed to persuade large pharmaceutical firms to invest more in the expensive process of developing novel antibiotics,” says miocrobiologist Markus Seeger. For example, patents for existing drugs could be extended to enable companies to reap profits for longer. In return, the companies would be obliged to bring new antibiotics to market. “Research and development in this area would then be cross-subsidized by the extended patent durations,” says Seeger.

Another potential model is to charge not for the sale of drugs, but for their availability. “The state would pay a kind of subscription, guaranteeing access to strong antibiotics when needed,” says Seeger. This Netflix-style arrangement is currently being tested in Sweden and the United Kingdom. Seeger is confident that by 2030, incentivizing models will be in place throughout Europe and in Switzerland to encourage the development of new antibiotics.

Private schemes such as the European BEAM initiative, a consortium of around seven small and medium enterprises conducting antibiotic R&D, are also important. “Switzerland has an above average number of such companies,” says Seeger. “We are very innovative in this area.” Basic research within the academy is just as innovative, as shown by the examples of Thomas Kessler, Oliver Zerbe and Markus Seeger. It seems likely that we will see completely new strategies emerging in the future – phages, novel antibiotic agents, or something else – for eliminating dangerous pathogens. But that doesn’t mean we can be cavalier about the use of these drugs. We must use them sparingly to hold onto our lead in the race against resistant bacteria. There will always be new drug resistances – it’s all part of the eternal game of evolution.