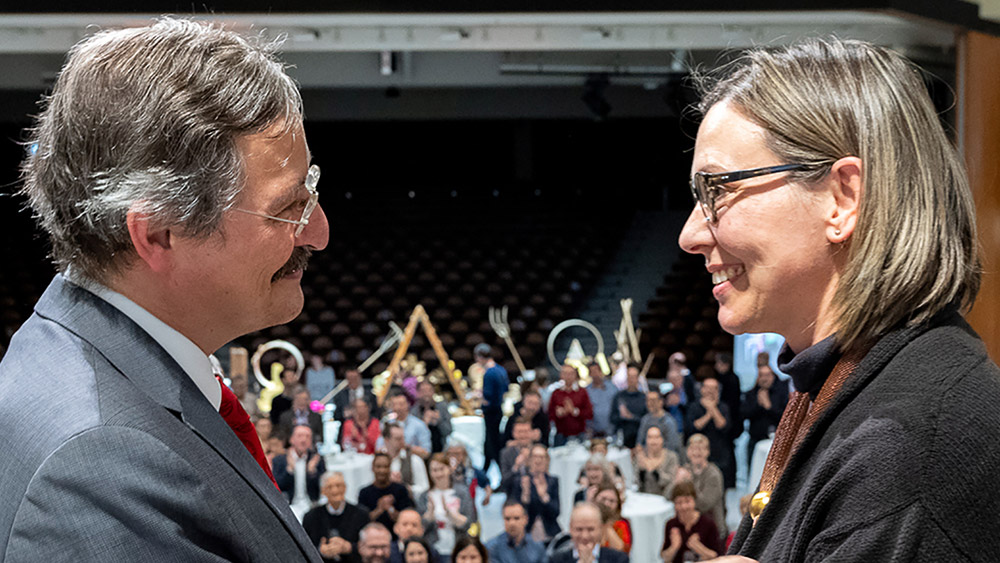 It all happened rather quickly. When Michael Hengartner took up his role as President of UZH on 1 February 2014, it was six months earlier than planned. The former dean of the Faculty of Science had to hit the ground running. “I’ve upshifted four gears,” he told the UZH Journal at the time.

At the same time, Hengartner was also active in forging international relationships and increasing UZH’s visibility on the global stage. During his time in office, the university entered into strategic partnerships with Charles University in Prague and with the Freie Universität Berlin, and became a member of the global network Universitas 21. In 2017, Hengartner hosted the annual conference of the European Universities Association (EUA).

At Hengartner’s final Senate meeting, Gabriele Siegert gave a farewell speech comparing him to a gardener.

“He valiantly tended the existing beds, but also made space for new crops and plants,” she said. Some of the many projects spearheaded by Hengartner will bear fruit in years to come, such as the university-wide Digital Society Initiative and its sister the DIZH, a joint initiative of the Zurich higher education institutions, as well as the Open Science project.  The effects of changes in the university’s management and governance processes will also only be fully felt in the coming years.

The same is true for the university’s building projects. Important steps toward construction development at the Irchel and City campuses were taken during Hengartner’s term of office, and some specific projects, in particular the plans for the FORUM UZH by Herzog & De Meuron, are the subject of great anticipation.

Hengartner not only cleared the way for more physical space, but also intellectual space: Creating and protecting the space and freedom to learn, research and think critically was one of his core goals – in addition to nurturing diversity at the university. “As well as cultivating traditional varieties and popular vegetables in the UZH garden, he also made sure some rare orchids had the right conditions to bloom,” said Siegert, and added: “As a biologist he was of course well aware that diverse ecosystems are more productive than monocultures.” A reflection of this commitment to diversity was seen, for example, in the UZH Diversity Policy, published in 2018. Hengartner also gave a boost to fundraising and the UZH alumni culture. In addition, he was particularly committed to getting the administrative and technical staff organization recognized as an official body represented in the Extended Executive Board.

“His communicative, open manner and his attentive listening skills meant he was able to consider the various needs of the diverse UZH community,” said Siegert. Hengartner had brought passion and drive – but also a healthy portion of pragmatism – to his role as president, she continued. He had only intervened where it was necessary and useful. “Just like a good gardener,” said Siegert.

In his new role as president of the ETH Board, Michael Hengartner will have other tasks to focus on. UZH can look back with gratitude on six dynamic years under his leadership.