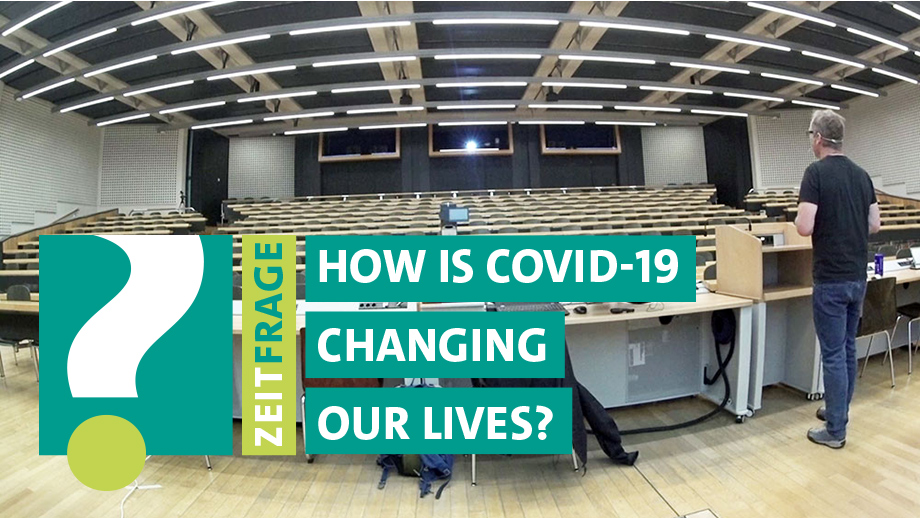 Numerous UZH projects in medicine and the natural sciences are helping to understand the coronavirus in all its facets and find innovative solutions. The pandemic has also animated research in the humanities and social sciences, giving academics at UZH plenty of material for new projects and redesigned research. By way of example we’d like to present two projects.

At the beginning of April, linguistics expert Heiko Hausendorf was due to start a project, funded by the Swiss National Science Foundation, to investigate the way communication is bound up with specific spaces − for example a discussion at a ticket counter, a service in a church, or a lecture in an auditorium. But because of the lockdown, he could no longer access these spaces. Virtually from one day to the next, the professor of German linguistics was deprived of his central object of research. Almost.

“Luckily, at that point we came across the interesting phenomenon of lectures to empty auditoriums,” explains Hausendorf. Just as games of soccer are being played in empty stadiums, UZH professors were recording their lectures in empty lecture halls to teach their students by video. “This was a unique situation for UZH, which we wanted to document. We also wanted to find out whether and how the practice of lecturing was changed by the fact that while the space was the same, interaction was no longer possible.” Ultimately Hausendorf was interested in finding out to what extent an auditorium is necessary for a lecture.

Together with his doctoral candidates Johanna Jud and Alexandra Zoller, and postdoc Kenan Hochueli, he recorded a series of these lectures to empty rooms. “We filmed the instructors with our camera in the situation in which they would lecture in front of their own camera,” explained Hausendorf.

The team is now using the methodology of interactional linguistics to analyze the recordings of the instructors. In addition to the spoken word, they’re looking at gestures and facial expressions, eye contact, and what’s called embodiment: how professors enter the room, occupy it and thus embody, for example, their role as an instructor. The researchers will also be investigating the situation of students when they receive the lectures from their home. Ultimately they want to compare their analysis with a normal lecture situation.

Initial analyses of the educator’s performance show that the situation of lecturing to an empty hall triggers a series of interesting phenomena. For example Hausendorf says that they have trouble finding the right mode of address. They often come up with self-reflexive comments such as “can anyone hear me?” or “I don’t see anyone here,” and sometimes they even step out of the video frame. “This reaction shows, for example, that a lecture hall doesn’t work as a recording studio,” says Hausendorf.

He’s convinced – not least from his own experience – that “a full lecture hall has a unique allure for teaching staff.” Even though a normal lecture in an auditorium is primarily a monologue situation, it’s highly interactive. This was shown particularly by the many irritations instructors struggled with in their virtual lectures. Their difficulties, says Hausendorf, were due to the absence of students and thus to the empty room. He’s in no doubt that auditoriums will continue to be required for lectures. “The future of the lecture should play out in auditoriums, not podcasts.” 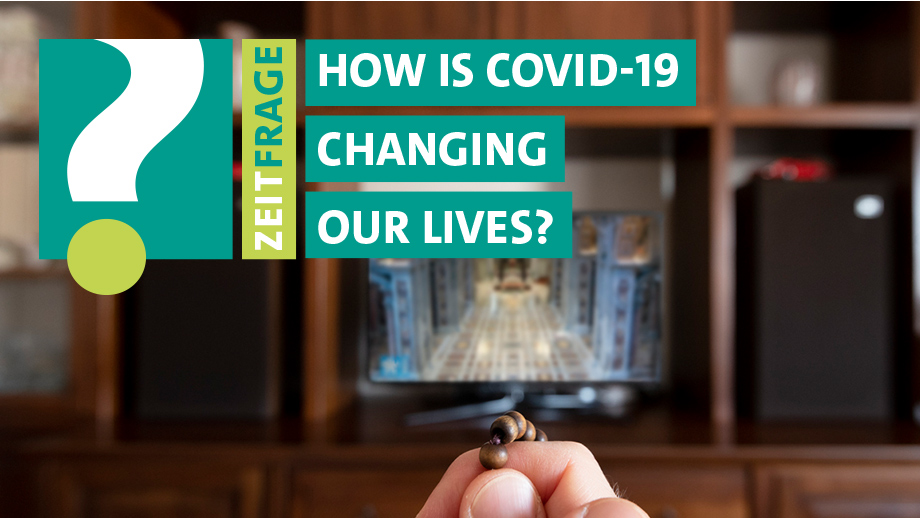 In the Corona crisis, some churches have discovered new media and, for example, broadcast their services on the Internet. (Image: iStock / PaoloGaetano)

The pandemic has also been a challenge for the churches. From services and marriage ceremonies to confessions, spiritual care for the dying, and funerals, many religious practices require direct personal contact – something that was no longer allowed during the Covid-19 crisis. In the last few weeks ministers, churches, and parishes have been looking for ways of staying in contact with members despite the obstacles. “It’s been striking how many online religious practices have emerged: services and confirmations have been streamed, pastoral care has been given via WhatsApp, and church staff have started using Twitter, Instagram, and podcasts,” explains Thomas Schlag, Professor of Practical Theology at UZH.

What’s worked, and what hasn’t

Thomas Schlag now wants to scientifically investigate how pastors and ministers have coped with the extraordinary situation. He has initiated a study called CONTOC: Churches Online in Times of Corona. The research project focuses on the following questions: How has the church used digital media to maintain spiritual life, and how well has it worked so far? How could digital formats be used in the future, and how would established religious practice have to change to reach more believers? According to Schlag, the number of clicks received by online services was sometimes higher than the number of Sunday churchgoers before the pandemic.

The study is also looking into whether during the lockdown church parishes joined forces with other actors in their social space, for example clubs and associations, and whether this allowed them to build new networks. “Naturally we’re excited to find out whether the churches will emerge stronger from this crisis,” says Thomas Schlag.

The various national churches in Switzerland are interested in the results of the study. “Thanks to the study we’ll be able to give the churches guidance on what tools have worked well during the crisis and how competent their staff are in the use of digital media,” explains Schlag. Given that digitalization will continue to shape the reality at churches in the post-coronavirus era, the findings would also feed into the teaching of theology at university level.

By the end of June the idea is to have surveyed all ministers in Switzerland, Austria, and Germany. Beyond that, the study is also being run in parallel in another 21 countries on five continents by an international research network set up out of Zurich. Thomas Schlag heads the CONTOC study together with scholars of Protestant and Catholic theology in Switzerland and Germany.