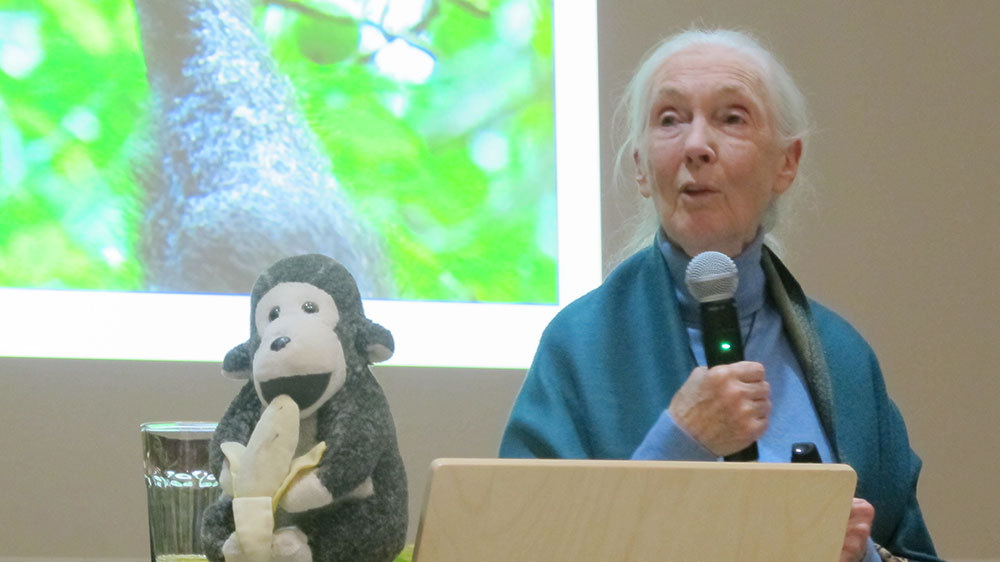 Jane Goodall
Primatologist Jane Goodall: “Every single one of us has the same indomitable spirit.” (Image: Melanie Nyfeler)

Jane Goodall needs no introduction. The 85-year-old primatologist entered a packed lecture hall on UZH’s Irchel Campus to great applause at the weekend. Goodall has stayed humble, despite being one of the most well-known figures in the world of research. She has dedicated over 60 years to investigating chimpanzees in remote parts of Africa and proved to be a resolute, courageous and persistent personality.

At the event, organized by the Jane Goodall Institute Switzerland and UZH’s Department of Anthropology, Goodall looked back on her life, sharing a series of evocative anecdotes and pictures with the audience. She still remembered the names of all the animals on the pictures she showed and told their stories with a great deal of respect.

Going to Africa had always been a dream of hers. She left school at age 18 and worked as a secretary until, at age 25, she gained passage to Africa. Once there, she established a camp in the jungle of Tanzania with very few resources and began her patient attempts to observe a group of chimpanzees in Gombe National Park and to imitate their body language. When finally the group’s alpha male cautiously accepted a nut from Jane’s hand, she knew that she had gained their trust.

Jane Goodall was the first to observe that chimpanzees had different characters, made and used tools, and also had their own culture that varied from one group to the next. “Back then I was ridiculed for my work – and today these are well-established facts,” she said. Her research findings were not taken seriously until a photographer from the National Geographic Society published photos of her and the chimps. And even her most ardent critics only fell silent when Goodall, who had no Bachelor’s degree, was awarded her PhD from Cambridge University.

When Jane Goodall attended a conference on chimp behavior in 1986, it was another turning point for her: “I went to that conference as a scientist, and I left as an activist.” In those four days, it became clear to her that establishing sanctuaries would not be enough to save the dwindling chimpanzee population. Local communities also had to be involved and made aware of the issues. Local farmers had to be shown alternative ways of producing food. “We can only help the chimpanzees if we also support the people in the villages,” said Goodall. One way of doing so was by cooperating with local authorities to promote microcredits for agriculture and tree nursery projects, for example.

Goodall also enjoys working with children and youngsters. Her Roots and Shoots program started with 12 students from Tanzania. The program has since grown to 4,000 such groups all over the world, empowering young people to affect positive change in their communities. “It’s incredible how many good ideas there are in the world. Young people give me hope for a better future.” Jane Goodall concluded the event with some words of inspiration: “Every single one of us has the same indomitable spirit. If we follow where it takes us, we can make the world a better place.” The audience thanked her with a standing ovation for her inspiring and rousing visit.

In the footsteps of Jane Goodall 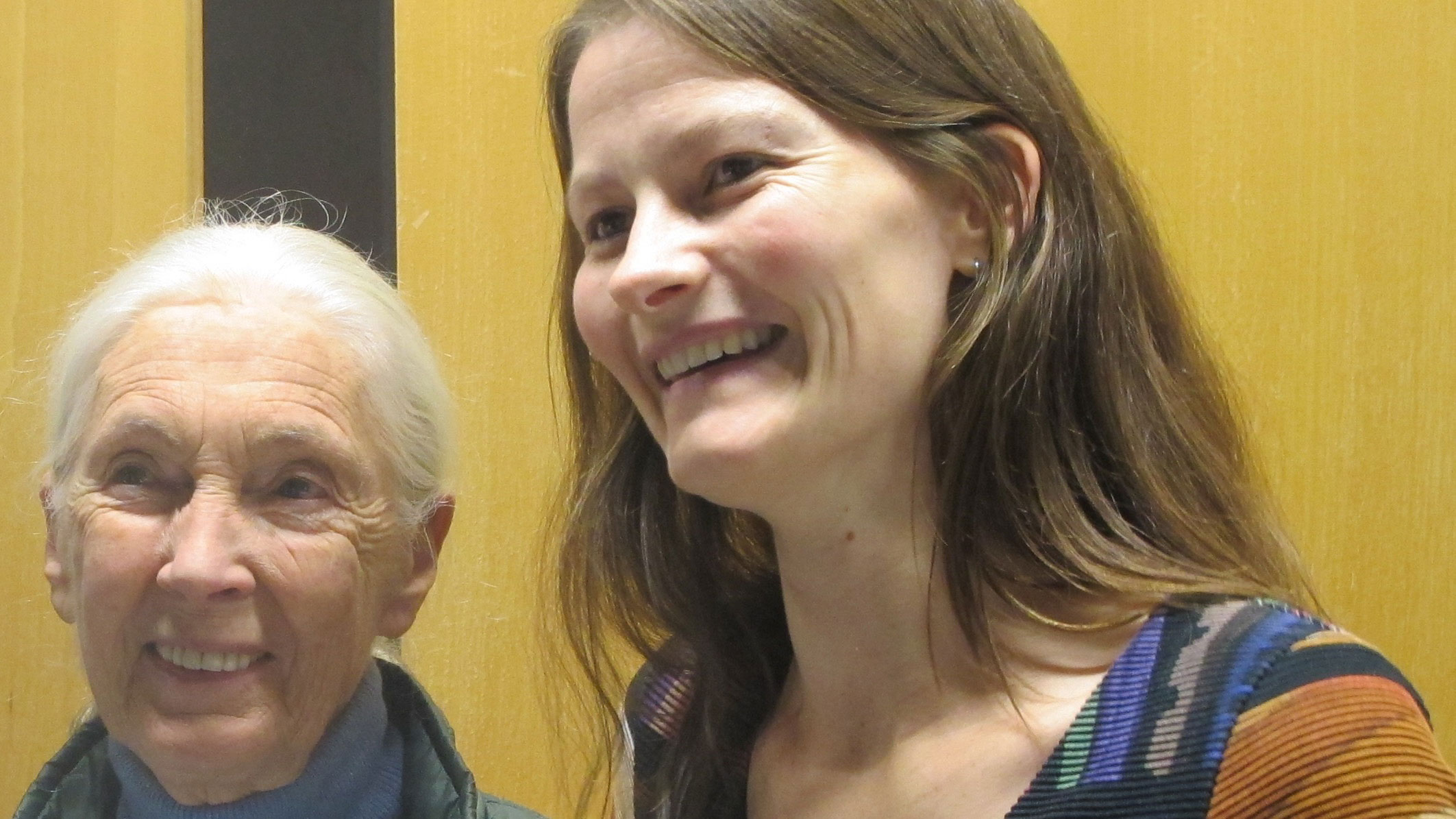 Junior academic Katheljine Koops from the UZH Department of Anthropology, who drew attention to the dangers faced by chimpanzees, rounded off the event. Koops has been performing research in the field in Guinea, Uganda and DR Congo for 16 years. She emphasized that chimps are the closest relatives of humans and share around 99 percent of our DNA. According to Koops, some 2,000 wild chimpanzees are killed every year by hunters or poachers – even in sanctuaries. In Uganda, around one quarter of chimps carry wounds from traps. Moreover, larger and larger areas of the animals’ natural habitat are being destroyed as a result of palm oil and coffee plantations as well as through deforestation and exploitation of mineral resources. Diseases transmitted by humans also contribute to the decimation of the chimpanzee population.