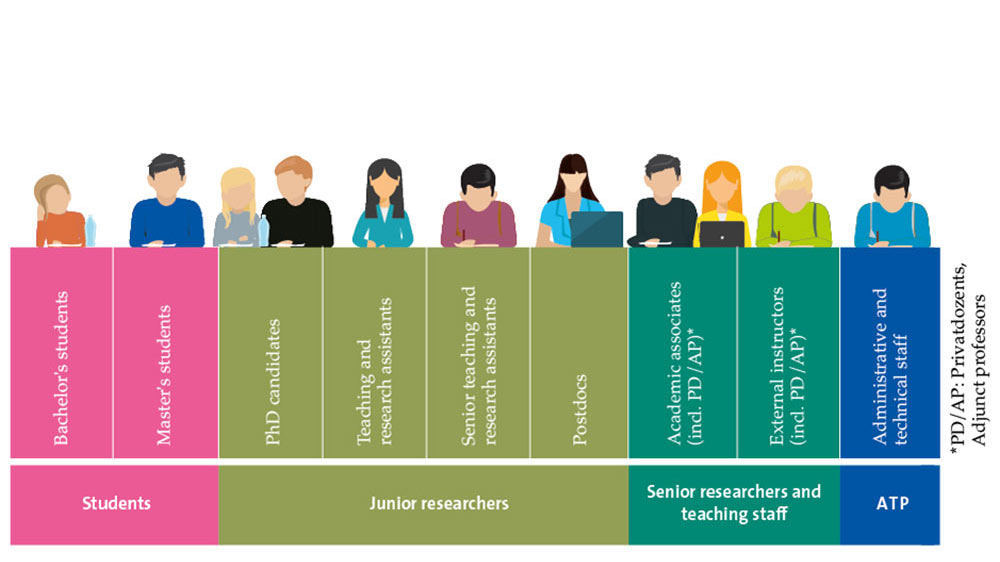 Sändeordnung neu
The bodies represented in the Executive Board of the University ensure that students and staff can exercise their rights of co-determination. The diagram shows how the representative bodies will be organized in the future. (Image: Daniel Holliger) 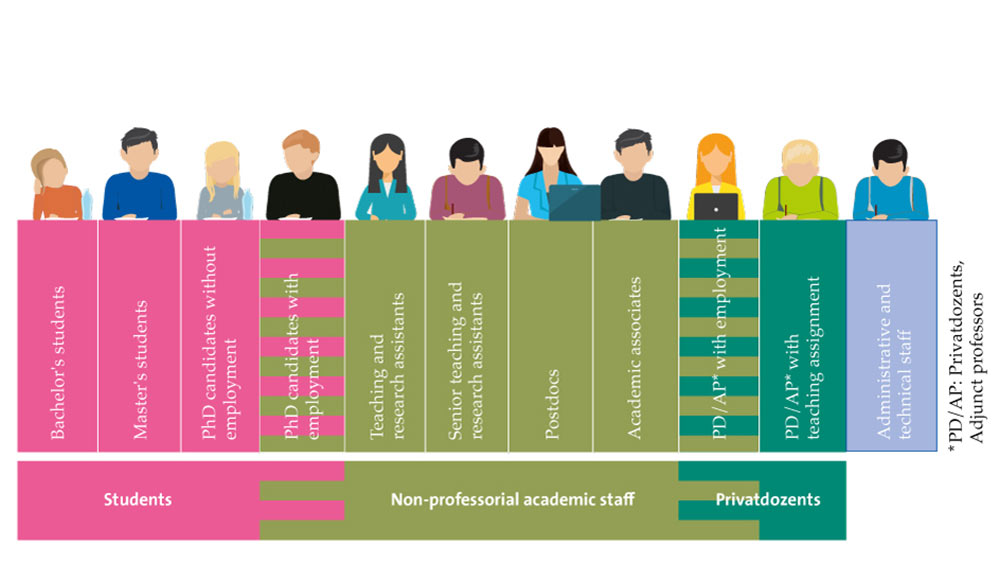 Michael Hengartner, President of UZH, welcomes the decision taken by the Cantonal Parliament: “The reorganization of the representative bodies establishes clearer roles and responsibilities that provide greater opportunities for all students and staff to actively participate in the development of UZH,” he says. The new organization is more consistently structured according to university role and career stage, thus uniting members of the UZH community with similar interests and concerns in the same representative body.

The professors advocated against the formation their own representative body, as they already have other platforms for presenting their interests and concerns at the University.

Changes at a glance

The administrative and technical staff will now be recognized as a full representative body in its own right, a change that President Michael Hengartner welcomes: “It is important to me that all staff have the opportunity of co-determination at UZH,” he says.

Under the new organization, postdocs and all categories of PhD candidates will be united in a new representative body of junior researchers; the current body representing the non-professorial academic staff will cease to exist.

The current body representing the privatdozents (PD) will be replaced by a new body of senior researchers and teaching staff. This body will now also represent adjunct professors employed as teachers or researchers at UZH, as well as academic associates and external instructors.

Commitment within the individual representative bodies

UZH staff and students can contribute to the activities of their own representative body through their various associations, and these are likewise affected by the upcoming restructuring.

Reactions to the changes

Hannah Schoch, Co-President of the Association of Non-Professorial Academic Staff (VAUZ), welcomes the reorganization of the representative bodies and the clearer definition of their remit in the University Act. In particular, she sees the reorganization of all PhD candidates into one body represented by the VAUZ as an important step forward. To date, some PhD candidates have belonged to the student body, while others were assigned to the non-professorial staff. “I am confident that the newly created body for junior researchers will make it easier to effectively represent the interests of PhD candidates not employed at UZH,” says Schoch.

For habilitated academics, the restructuring marks a new direction, as the title of “privatdozent” will no longer be used in the name of the representative body. Caroline Maake, president of PDV, the association for privatdozents and adjunct professors at UZH, is nonetheless convinced that uniting the habilitated and non-habilitated staff at UZH is a logical decision that reflects the changing nature of academic career paths. “With the new representative body of senior researchers and teaching staff, a think tank with extensive expertise has been established that can deliver important input for the future development of UZH,” says Maake.

The VSUZH student association also embraces the reorganization: “Under the restructuring, we will unfortunately lose the PhD candidates that formerly made up part of the student body. Nonetheless, we look forward to the ongoing support of all types of PhD candidates who wish to remain involved in VSUZH as passive members. We also welcome the clearer definition of the representative bodies and the full recognition of the administrative and technical staff as their own body. We believe this will improve the model of co-determination at UZH for all bodies represented in the Extended Executive Board of the University,”says Nhi Pham, a representative of VSUZH.

Sibylle Dorn, Co-President of VIP, the representative body association of administrative and technical staff, also commented on the restructuring of the bodies: “The reorganization will be a challenge, but one we embrace. Our members have much to contribute to make UZH a better, more modern and attractive university. UZH can only benefit from our expertise.”

President Michael Hengartner looks forward to the new developments: “I very much hope that as many students, researchers and staff as possible will help shape the future of our University by actively participating in their representative body. The UZH thrives on the ideas and commitment of its members.”

Timing of entry into force

Once the revised University Act can enter into force, all students and staff at UZH will be informed in a personal e-mail about which representative body they belong. The exact date as of which the act will enter into force is yet to be determined.