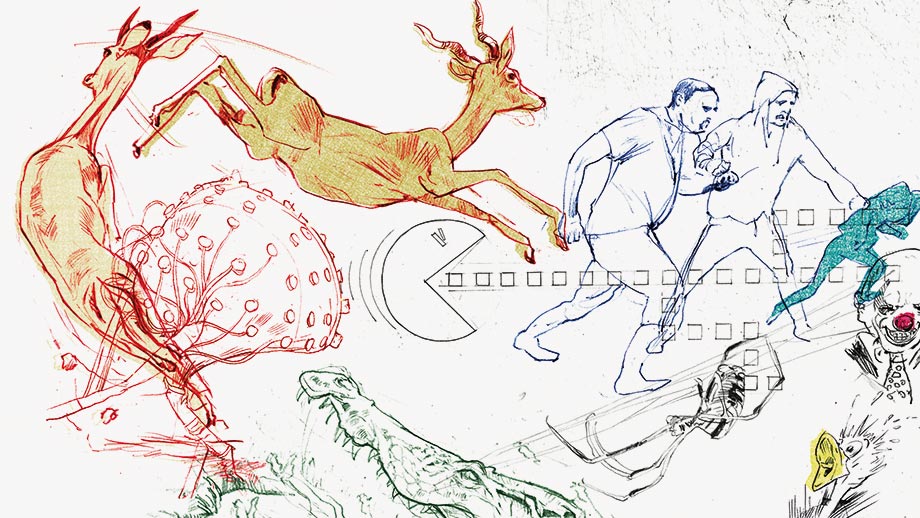 Antilope
Scientists know quite a lot about how animals behave under threat. But psychiatrist Dominik Bach is primarily interested in human beings. (Illustration: Christoph Fischer)

The antelope stands peacefully at the riverbank drinking water: A picture of calm. A moment later it springs into the air, spins away from the nearby cliff face just in time and is already out of the picture – vanished, just as the mouth of a crocodile emerges from the water, jaws agape, snapping after its prey in vain. It all happens so quickly that it seems as if the antelope must have already been preparing to flee before it even saw its attacker. “Its actions are unbelievably fast and optimally executed,” says Dominik Bach admiringly.

Bach, on whose computer screen we are watching the video clip, is a professor at the University Hospital of Psychiatry Zurich. “If I used a computer to calculate this extremely complex, best-possible escape route, the program would need at least a minute – which might be too long!”

The antelope has no time to think about the best course of action, and it also can’t practice for such a situation: It has to get it right the first time, otherwise it dies. “Its brain has to make a mathematical estimate in order to be able to calculate such a complicated sequence of movements quickly enough,” explains Bach. How it actually does that is something Bach would really like to know.

Scientists know quite a lot about how animals behave under threat. But psychiatrist Bach is primarily interested in human beings. The behavior of humans in such situations has been the subject of surprisingly little research, says Bach. How do people react to threatening situations such as an attack or an accident? What movements do they make, what happens physically, what emotions do they feel? In order to research these questions, Bach and his team carried out a research project supported by the European Research Council in which healthy participants played computer games similar in style to Pac-Man.

While the study participants tried to defend their avatar from an enemy that wanted to eat them, their brain activity was measured and their movements recorded. “The games have very basic graphics but it’s still possible to really lose yourself in them,” says Bach, who enjoys playing computer games himself.

Martial arts and the Iliad

The computer game gives an indication of how participants react to a simulated threat. But we do not know whether they would react in the same way in a real-life threatening situation. In order to find out more, in the next stage participants will be confronted with realistic dangers using virtual reality. “We will focus on situations that are as primordial as possible,” says Bach, “such as being attacked by an animal or by an unarmed person.”

The psychiatrist drew inspiration for such scenes from surprising sources, including martial arts literature and Homer’s Iliad, which he has just finished rereading: He found the realism and variety of the depictions of the fight or flight response in the Iliad astonishing.

With this experiment, Bach and his team hope to find answers to questions including the following: Will the participants manage to learn from mistakes, for example if they fall into an abyss when they try to avoid falling rocks? Bach explains: “We humans are equipped with a few mechanisms that we can change, and others that we can’t.” He hopes the virtual reality experiment will reveal which things can actually be learned. This could be helpful in terms of improving training for those who work in risky occupations such as fire-fighting and have to contend with extreme situations.

How do people assess how serious a threat is? “Patients with anxiety disorders display very strange behaviors that we have not yet understood,” says Bach. For instance, arachnophobics look away when they are shown a spider. “It is often thought that they look away because they overestimate the threat.” But Bach is not convinced by this explanation: “If you see something as a source of danger, it is unlikely that you would not want to see where it is and what it is doing. You would keep your eyes fixed on it! When animals perceive a threat, they stare at it and maybe move backwards away from it.”

No research has previously been done into what healthy people do when they see dangerous spiders. Bach would now like to use his virtual reality experiments for such research, with the aim of finding out how phobias arise.

As a physician at the University Hospital of Psychiatry Zurich, Dominik Bach also treats patients with post-traumatic stress disorders (PTSD). For many people who experience a traumatic event such as an accident, rape, assault, natural disaster or war-related incident, life does not go on as normal after the threat has ended, even after the physical injuries have long-since healed. People with PTSD react as if they were in danger once again when they encounter harmless situations that bear some similarities to the traumatic event. They are also haunted by involuntary memories of the event.

These types of stress disorders are difficult to treat. Psychotherapy can take a long time and is not always successful. In addition, psychotherapy is not always readily available to people – for example in war zones and conflict areas. In such situations quick-acting and cheap treatments are needed – for example a drug that could modify memories of negative experiences.

Currently no such magic pill exists, but Bach is working on another project that is doing basic research with this aim in mind. He has been able to show in an experiment that the antibiotic doxycycline can help to attenuate negative memories (see box). This could help people suffering from post-traumatic stress disorder.

But why do we even have these disturbing emotionally-fraught memories of threatening events? From a purely biological point of view, argues Bach, our bodies just need to get us to safety quickly in a threatening situation, for example by fleeing. Perhaps, surmises the researcher, these feelings are a kind of marker in our collected trove of experiences, a bit like a trigger word or a highlighter: They serve to make us react as effectively as possible at moments when we are no longer capable of behaving rationally. Just like the antelope with its acrobatic escape.

With doxycycline it may be possible to eliminate or at least reduce the intensity of painful memories. It was recently discovered that the antibiotic, which is used for infections of the bladder and the respiratory tract among other things, inhibits the activity of an enzyme that plays an important role in the formation of memories in the brain.

Psychiatrist Dominik Bach and his team have conducted a trial with 80 volunteers: The healthy participants were conditioned to associate certain colors with unpleasant physical sensations: When they saw a particular color, they received a slightly painful electric stimulus at the same time. Before the experiment, half of the participants were given the antibiotic doxycycline and the rest were given a placebo.

One week later, all participants were shown the “dangerous” colors again. The antibiotic group had shock reactions that were around a third weaker than the placebo group. “We were able to show that doxycycline weakens the emotional recall when taken in advance of a negative experience,” says Bach. Bach was awarded the Pfizer Research Award and the Robert Bing Prize of the Swiss Academy of Medical Science (SAMW).