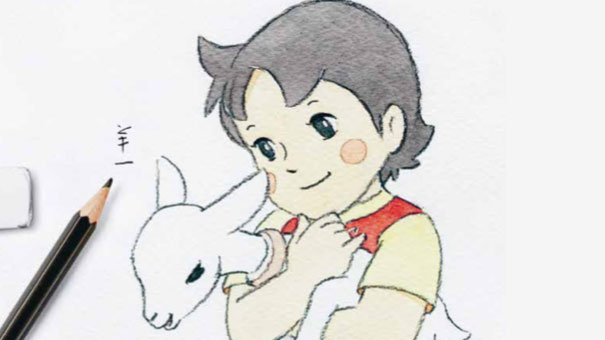 The character of Heidi in the Japanese anime was drawn by Yōichi Kotabe. (Picture used with permission) (Image: zVg.)

“Heidi, Heidi, the mountains are your world. Heidi, Heidi, up here you are at home.” When Hans Bjarne Thomsen, then a fledgling professor of art history at UZH, took his Japanese wife hiking on the Rigi in 2007, she burst into song upon seeing a herd of goats, lustily singing the chorus of the Japanese Heidi anime, a song that is familiar to grown-ups and children alike in Japan. “I was astonished. At the time I thought – she’s an adult! She still remembers the Heidi anime that she saw 30 years ago and it still shapes her image of Switzerland today,” says Thomsen laughing. The anime’s influence is not limited to Japan, but also spread to Europe, Mexico or Argentina. The free-spirited Heidi is still Switzerland’s number one literary export and has starred in comics, musicals and Hollywood movies.

The 52-episode Japanese anime series, which was first shown in Japan in the early seventies before being broadcast throughout Europe and becoming a TV classic, was based on the 1880 novels by Swiss author Johanna Spyri, “Heidi: Her Years of Wandering and Learning” and “Heidi: How She Used What She Learned”. It is the story of an orphan who discovers her love of the mountains while living on the alp in the care of her good-hearted but cantankerous grandfather. The book quickly became a classic of children’s literature – just as the anime later became a classic of the small screen. Heidi’s big saucer eyes, the garish green of the pasture, and the skipping goats have long since become merged with the scenes from the novel in our collective imagination.

The Heidi enthusiasm of the seventies originated with three Japanese artists, Isao Takahata, Hayao Miyazaki and Yōichi Kotabe, who traveled to Europe in 1973 to research the alpine story. “Until today, of the many different interpretations, none has been so influential in shaping the international image of Heidi as this cartoon series,” says Thomsen. Forty-five years after it first aired in Japan, the idyllic mountain world of the cartoon is still enchanting audiences. But why Heidi in particular? After the Second World War, people in the emergent industrial nation of Japan yearned for harmony and a return to nature. That’s precisely what Spyri’s alpine idyll promised, says Thomsen.

The Heidi anime, however, was not just a hit in Japan. When it was aired in Europe, it was an immediate success, and quickly broke viewing records in Germany, Spain and Italy. Interestingly the series was never shown on a Swiss channel. One reason may have been that a German/Austrian/Swiss co-production of a 26-episode series about Heidi was already in planning, and was broadcast in 1978. However, it never enjoyed the same degree of success or became as well-known as the Japanese anime.

The Japanese Heidi anime series was also a success in Switzerland, where it could be watched on foreign channels, and was enjoyed by many Swiss children. At the same time, the popularity of the Japanese anime aesthetic extended to other cultural forms, opening the door for other types of films and for Mangas. While the Japanese were interested in European culture and yearned for the supposedly natural idyll of the Swiss Alps, their European counterparts were discovering Japan’s modern culture.

The clear-cut good-versus-evil world of Walt Disney was getting competition. “In animes the characters are more differentiated,” says Thomsen. The aesthetics and style of the illustrator of the Heidi series, Yōichi Kotabe, also became influential. As well as working on TV series and movies such as Heidi, he later also did artwork for the world-famous Pokémon films and for video games such as Mario vs. Donkey Kong and Super Mario Bros.

With the Heidi anime, the Japanese style began to win influence. This cultural transfer between Japan and Europe has long fascinated art historian Thomsen, and is one of his research interests. “These economic, literary and art historical aspects will also be the subject of an academic symposium in August,” says Thomsen. A particular highlight for Thomsen is Yōichi Kotabe’s participation in the symposium. 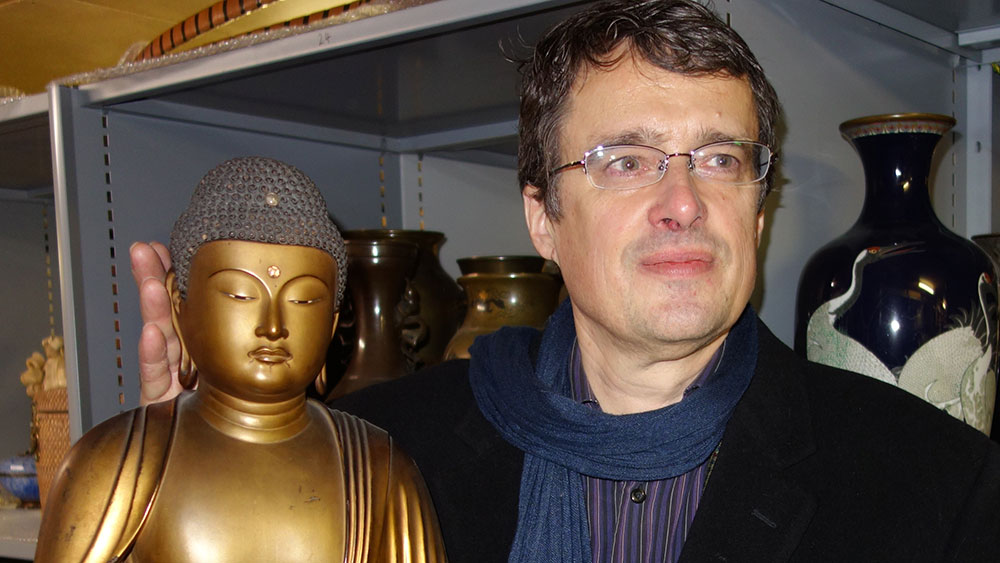 Hans Bjarne Thomsen, UZH-Professor of East Asian Art History
“The symposium and accompanying museum exhibition will explore a range of key questions, including the problem of inter-cultural transfer and cultural appropriation, or the role of an idealized image of Switzerland”: Hans Bjarne Thomsen, UZH professor of East Asian art history. (Picture used with permission) (Image: zVg.)

Thomsen is also excited about the forthcoming exhibition about Heidi and Japan at the Swiss National Museum in Zurich from 17 July. He worked with the museum team on the exhibition as a guest curator. On display will be many individual drawings done by Yōichi Kotabe for the anime – a veritable feast for the eyes. Kotabe drew thousands of sketches. These special and detailed pictures reveal how the film-maker immersed himself in the Swiss landscape for the Heidi series.

No braids for Heidi

In Maienfeld and the surrounding area, the director Takahata and his team made video and sound recordings. Every house, every field that they later drew and animated back home in Tokyo came from a real image that they had seen on their journey. A small detail: At first they had planned to draw Heidi with braids, but after a conversation with a museum director in Chur, they gave Heidi a more practical short haircut: The grandfather on the alp would never have had time to braid the girl’s hair, they were told.

“When I came to Switzerland in 2007, I was of course also interested in what the Swiss thought about the anime,” explains Thomsen looking back. Some were proud that Heidi was so loved in Japan and that the Japanese held this image of Switzerland as a beautiful country deeply connected to nature. But there were also dissenting voices who felt that the nature spirit Heidi did not really represent Switzerland. In the Heidi series, the German city of Frankfurt was depicted as a cultural center, ignoring the modern, urban and cultural side of Switzerland.

“That was also an interesting question,” says the art historian, whose interest in researching anime began as a young PhD candidate in Princeton. At the time, however, his thesis supervisor advised him against the topic and told him that all research into Japanese art from any time after the 16th century was trash. Luckily Thomsen did not take his words on board.

Exhibition and Symposium: Heidi in Japan

The exhibition curated by Hans Bjarne Thomsen will be on display at the Swiss National Museum in Zurich from 17 July to 13 October.

In August (29 to 30 Aug. 19), UZH will host an international symposium: “Heidi from Japan: Anime, Narratives, and Swiss Receptions”. A particular highlight is the participation of the illustrator of the Heidi series, Yōichi Kotabe, who also illustrated characters from the Pokémon films and video games such as Mario vs. Donkey Kong and Super Mario Bros.