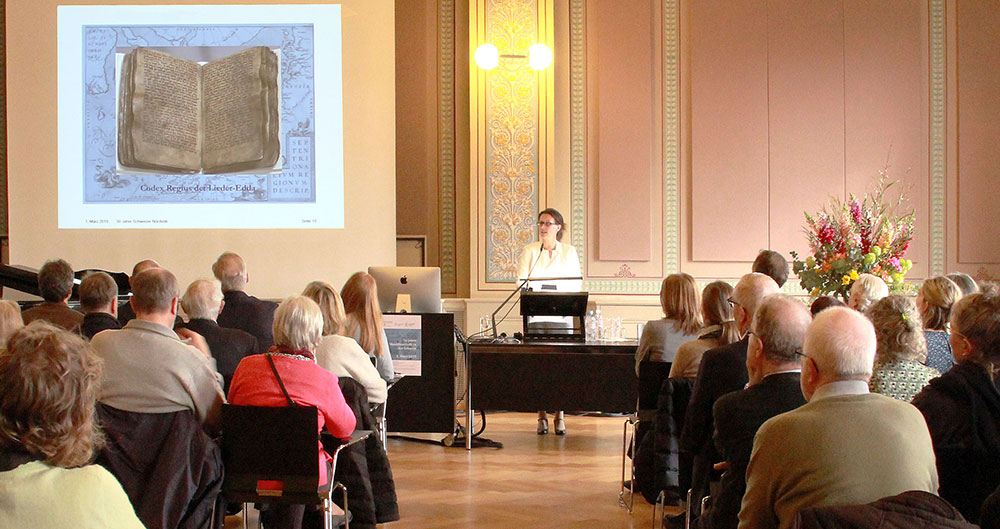 Fifty years ago, the establishment of a joint professorial chair and the appointment of Professor Oskar Bandle saw Nordic studies become a subject area in its own right at UZH and the University of Basel. This long-lived cooperation with Basel had turned out to be of great value, said UZH President Michael Hengartner in his speech at the start of the anniversary celebrations, setting a good example for collaboration between universities in teaching and research. The department of Nordic language and literature was a role model thanks to its international outlook, he continued. Scholars in the department were in regular contact with colleagues from other renowned institutions, including Humboldt University, the University of Cambridge and the University of Stockholm, to name but a few. “As president, I am particularly pleased that Nordic studies is enhancing the visibility of UZH and Switzerland in the research sector.”

In the morning Klaus Müller-Wille, professor of Nordic language and literature at UZH, lectured in Basel about the historical development of Nordic studies, while in the afternoon Lena Rohrbach, professor at the Universities of Basel and Zurich, did the same in Zurich.

Fascination with the Nordic countries harked back to ancient times, said Rohrbach. In around 100 BC the storyteller Tacitus wrote in his essay Germania that in Scandinavia “the last rays of the setting sun remain until nightfall, with a light so bright that the stars pale.”

At the start of the 19th century interest in the lands to the north grew among German-speaking academic circles. The brothers Grimm published their Lieder der alten Edda [songs of old Edda] in 1815, laying the foundations for linguistic study of the northern Germanic languages, said Lena Rohrbach.

From the very earliest days, courses in Nordic traditions of the Middle Ages were held at UZH. In the summer semester of 1833, the University’s founding year, Ernst Moritz Ludwig Ettmüller lectured on “German antiquities”. Ettmüller, who was later appointed the first professor of German language and literature at the University of Zurich, was dubbed “Eddamüller” by German composer Richard Wagner due to his intensive preoccupation with the Edda. Wagner drew on German sagas including the Nordic Edda in his opera cycle Der Ring des Nibelungen.

In this first phase of scholarly interest in Nordic studies there was surprisingly little attention paid to Scandinavian literature of the present, such as the now-famous writers Ibsen or Strindberg. At the start of the 20th century, Adeline Rittershaus – the second-ever woman to receive the venia legendi at the University of Zurich and the first female privatdozent in the Faculty of Arts – was the first Zurich academic to examine contemporary Scandinavian literature.

The subject’s low point came during the 1930s and ʼ40s. The affinity of many Nordic scholars with National Socialism was a major reason for the discipline being temporarily discontinued after 1945, said Rohrbach.

Against this backdrop, Scandinavian studies had to reestablish itself as a subject in the post-war years. In the mid-1960s, a plethora of university departments for Scandinavian studies were reopened or newly established in Germany. With this rekindling of interest in the subject, the new professorial chair for Nordic language and literature was opened at the Universities of Basel and Zurich in 1968.

Research at the professorial chair is broad in terms of the geographical and historical areas it covers, ranging from the Eddas and other sagas to Hans Christian Andersen, Astrid Lindgren and contemporary Scandinavian literature. “Our task is to examine the particularities and complex associations of Scandinavian culture through the lens of time and to assess its relationship with other regional development trends in Europe and the world,” said Rohrbach.

The celebratory high point of the day was the launch of the book 50 Jahre Skandinavistik in der Schweiz [50 Years of Scandinavian Studies in Switzerland] edited by Jürg Glauser, professor emeritus of Nordic language and literature. The book did not claim to offer a comprehensive history of teaching and research in Nordic and Scandinavian studies, but rather gave voice to as many students, teaching and research assistants, doctoral candidates and instructors as possible, said Glauser.