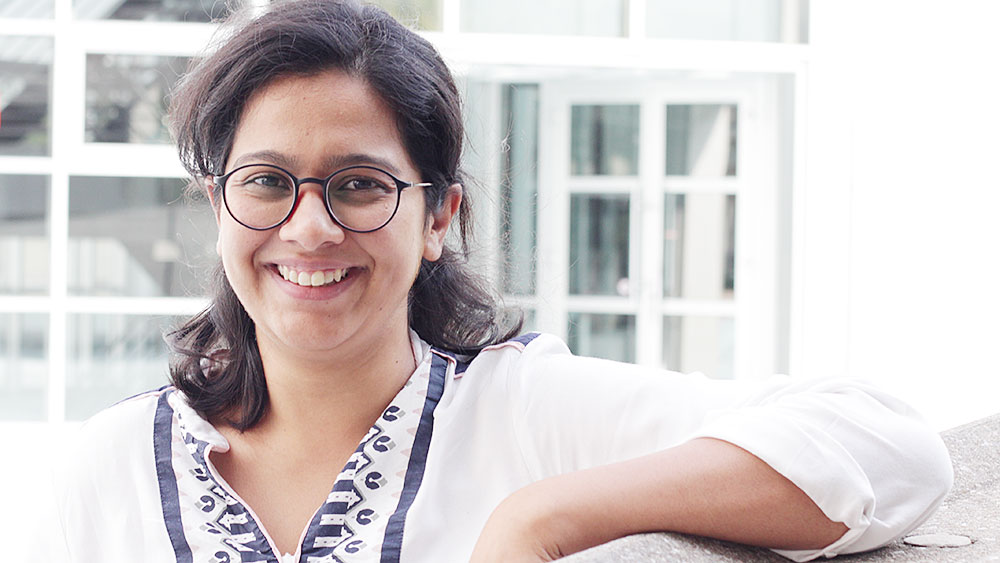 Her first experience of Switzerland? Shraddha Karve laughs: “A fine of several hundred Swiss francs.” She was on her way home to India from a conference in Spain. At a layover in Zurich airport at 3 o’clock in the morning, it was noticed that her Schengen visa had run out just a few hours earlier. That was an expensive mistake.

Around three years after this misfortune, Shraddha Karve touched down at Zurich airport once again, this time for a longer stay. Since October 2016 she has been a postdoctoral researcher at the Department of Evolutionary Biology and Environmental Studies at the University of Zurich, in Professor Andreas Wagner’s research group Molecular Evolution and Evolutionary Systems Biology.

The interaction of genes, the environment and organisms has long fascinated Shraddha Karve. She became aware of the subject of biology at a young age thanks to her mother, who was a biology teacher. She went on to study biology herself at Pune University, with a concentration in evolution. “I wasn’t just interested in what things are like – i.e. the anatomy or physiology of living creatures – but also in how they got to be that way.” Her studies mainly revolved around microbes such as bacteria and fungi. They are particularly valuable in the study of evolution because they have been in existence for millions of years and have a short reproduction time, making it possible to simulate evolutionary processes in the lab.

Subsequently, in her PhD thesis at the Indian Institute of Science Education and Research (IISER) in Pune, Shraddha Karve examined the question of how bacteria react to changed environmental conditions. Her findings were surprising and worrying in equal measure: Bacteria can become very stress-resistant and develop resistance to heavy metal and antibiotics even when they have never come into contact with them.

“Up to now our attention was very much focused on reducing antibiotic use in order to prevent resistance,” says Karve. That is an important strategy, especially in India, where antibiotics are available without prescription. But, Karve notes, “we need to widen our approach, as the research is more and more clearly showing that bacteria can also become resistant without contact with antibiotics.” That makes the development of new types of drugs to combat bacterial infections all the more urgent.

Now a postdoc at UZH, Shraddha Karve has spent the past two years researching whether organisms have an evolutionary advantage if their cellular processes can take place in a different way – i.e. if they have what is known as high variability.

“UZH is one of the world’s leading research centers for evolution and ecology,” says Shraddha Karve. There is a large degree of thematic overlap with research being carried out at universities in her home country of India – for example with regard to questions of population distribution or behavioral ecology of rare animal species. Awareness of this overlap has led Shraddha Karve to organize a conference for researchers from both countries. The conference, which is supported by a Graduate Campus Grant, will take place from 18 to 20 September and is open to the public. Professors from universities in Pune and Bangalore will join colleagues from UZH to present and discuss their research in the field of evolutionary biology and ecology.

The event is deliberately small-scale. “There are enough big conferences,” says Shraddha Karve. “But they have packed programs and you don’t get much time to meet other researchers.” In contrast, at the Indo-Swiss Collaboration Primer in Evolution and Ecology at UZH, the focus is on making personal connections – and the program is less tightly packed so that participants have enough time to network and discuss their ideas.

It has already been decided that UZH researchers will make a return visit to Bangalore for a similar conference in September 2019. “The best outcome would be if it led to joint research projects,” says Shraddha Karve.

Shraddha Karve will be busy with her postdoc project for the next couple of years. But what then? Her answer is unequivocal: “I’ll go back to India.” At the moment she and her husband only see each other every few months, flying back and forth between Pune and Zurich. She intends to look for a post in academia back in India – but she knows that won’t be easy: “Most Indians, academics included, have close ties to their families back home and usually return after a few years abroad.”

But for now Shraddha Karve is enjoying her time in Switzerland. “It’s almost annoyingly perfect,” she laughs – she’s used to life in India being a bit more chaotic. In her free time she enjoys watching the Indian movies that are often shown in Zurich cinemas: “It’s great to be able to see them.” She also does acting herself and is writing a play – for an Indian expats’ theater group in Zurich.

The Indo-Swiss Collaboration Primer in Evolution and Ecology takes place at UZH’s Irchel Campus from 18 to 20 September and is open to the public and free of charge. No registration required.

Shraddha Karve is organizing the conference together with doctoral candidate Felix Moermann and post-doctoral researcher Xiang-Yi Li, both also at the Department of Evolutionary Biology and Environmental Studies.

The idea for the conference came about during a trip to India in spring 2018 organized by the Graduate Campus, when their Citizen Science exhibition was shown at two universities in India.

Chandrashekhar Padhi commented on 17 September 2018, 11:10 Good News The conference will certainly bring the Indi-Swiss Ties closer. I am in one such arrangement, with a joint project that we developed between KIIT University in India and ETH. Hope you have a great success and I would also like to join the sessions of your conference.
Shraddha Karve commented on 7 September 2018, 10:49 Thanks Thanks Sujata! Please do join us for any of the sessions if you wish to.
Sujata Tetali commented on 7 September 2018, 09:18 Very good initiative The conference topic is very much exciting. I hope participants will share their ideas and very good collaborative projects will be conceptualized with good networking. Wish you all the best for the conference.