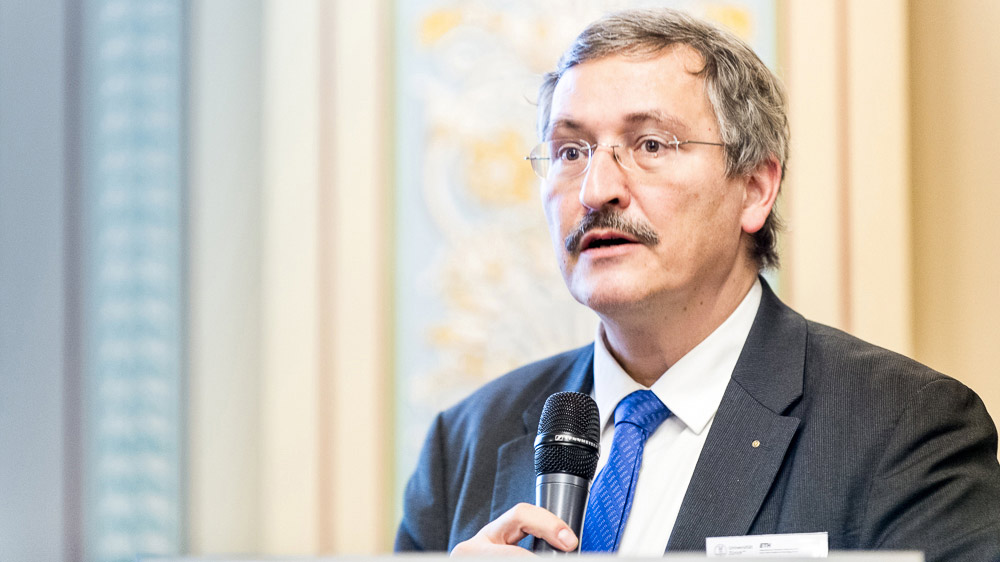 The opening ceremony for the Participatory Science Academy took place at UZH on Wednesday evening, with President Michael Hengartner addressing those in attendance as researchers: “I call you all researchers,” he said with a wink, “as every one of us has the potential to be one.” With the new Participatory Science Academy, he continued, UZH and ETH are aiming to involve the public in academic research. The Academy is an extension of the Citizen Science Center Zurich, which was co-founded by UZH and ETH.

The goal, explained the President, is to bring academia and the general public closer together, with the Academy acting as a contact point for anyone interested in conducting citizen science and working together on equal footing. “We want to be engaging in a dialogue with society at large,” said Hengartner, adding that citizen science can be applied to any field. According to Hengartner, the Participatory Science Academy and Citizen Science Center are new territory for the University. He expressed his gratitude to those who helped make the Academy a reality, with Mike Martin, professor of gerontopsychology at UZH, and astrophysicist Kevin Schawinski receiving special mention.  The President also expressly thanked the Stiftung Mercator Schweiz for providing funding to make the Academy possible.

The knowledge of the group

Andreas Vaterlaus, vice president of curriculum development at ETH, then took the floor, echoing Hengartner's words of thanks. In his welcoming remarks, he reflected on the concept of citizen science and posed the rhetorical question: What can members of the public without academic training contribute to research? According to Vaterlaus, a physicist by training, the answer lies in what is called “the wisdom of the crowd.”

The ubiquity of smart phones and computers now empowers many people to calculate and observe like never before. This gives individuals a decentralized form of knowledge that can be put to use in citizen science projects. It is here where the Participatory Science Academy can open up new possibilities. “The Academy is bringing science closer to the community,” said Vaterlaus.

Mike Martin, member of the Executive Committee of the Participatory Science Academy and the Board of Directors of the Citizen Science Center Zurich, shared a few words about the goals of the Academy. When it comes to citizen science, everything revolves around the concept of participation – ranging from simple data collection to conducting your own research project.  The goal of the Academy is to boost this participation as much as possible, said Martin.

This can be achieved in two ways: By improving the competence of citizen scientists and by increasing academic journals’ and funding organizations’ recognition and acceptance of citizen science as a legitimate research method. The Participatory Science Academy will offer continuing education, project studios and seed grants as a way of bringing academia and the public closer together. The hope is to generate a uniquely Zurich style of conducting citizen science.

Crowdsourding in the 18th century

Pasqualina Perrig-Chiello, professor emerita at the University of Bern, and Bruno Strasser, professor of the history of science at the University of Geneva, provided additional perspectives on the significance of participatory science. Following their remarks, Andrew Holland, director of Mercator Schweiz, explained why his foundation was lending its support. He took the audience back to the passing of the Longitude Act in Britain in 1714, which offered up to 20,000 pounds in compensation to anyone who could solve the longstanding problem of calculating longitude while at sea.

Clockmaker John Harrison was the one who came up with a solution, which was astonishingly simple: A series of highly accurate clocks that calculated longitude based on the time at the home port.  “It was a self-taught practitioner who revolutionized sea travel,” said Holland, who pointed to the Longitude Act as one of the first examples of crowdsourcing, or making use of the knowledge and intelligence within the community.  The intent of the Participatory Science Academy is to bring this idea to life in the present day, said Holland, and to bring science and the community closer together. There is a lot of excitement about what the outcome will be, he said in closing.

Interested in languages? Want to learn more about the history of Swiss German dialects?  Then you can join the newly launched “Wenker sentences” project as a linguistics researcher. The sentences get their name from German linguist Georg Wenker, who sent 40 sentences in High German to numerous Swiss schools almost 100 years ago for pupils to translate into their local dialects. The sentences contain phrases such as “Dry leaves fly around in the air in wintertime” and “I'm poor and I'd like to be rich.” The sentences were intended to capture the most important features and differences in the dialects.

The schoolchildren’s translations resulted in around 1,700 “Wenker surveys” that have not been analyzed to this day. “Wenker's team got overwhelmed by the volume of the data,” says Elvira Glaser, professor of German philology at UZH. Glaser and her team would like to unearth this linguistic treasure trove with the help of citizen scientists, who would be tasked with transcribing the handwritten surveys into block letters that can be read by machine.

Citizen scientists can also translate the Wenker sentences into their current dialect, which would provide valuable data about how regional dialects have changed since 1930. The research team has created an appealing and easy to understand website for the Wenker project. Anyone who is interested in transcribing or translating the german dialect sentences can get started after a simple login procedure.