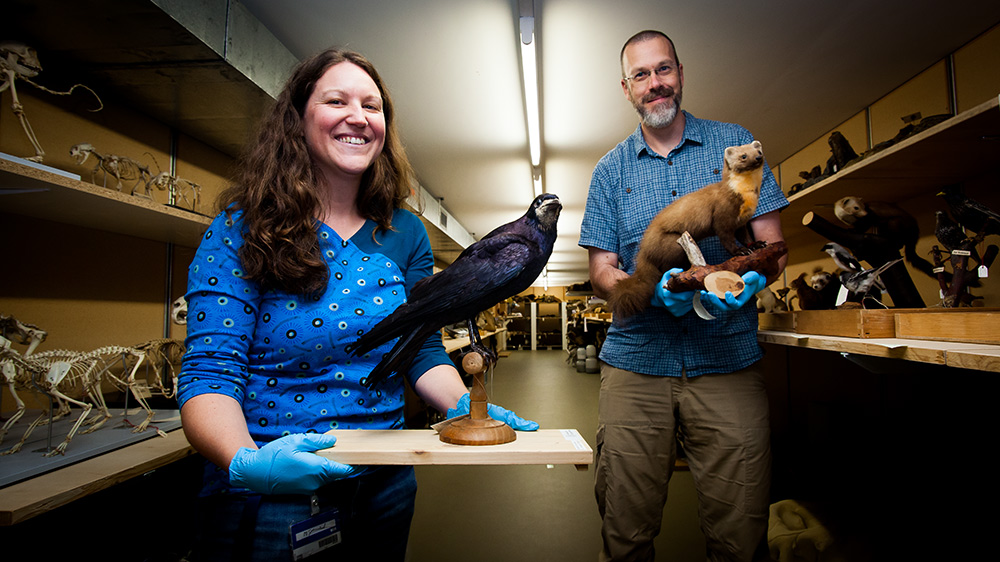 Whale teeth, giant tortoise shells, innumerable stuffed birds and mammals, a huge collection of invertebrates: The Zoological Museum’s natural history collection doesn’t fail to amaze. And while the exhibits on view in the Museum are numerous enough, the scientific collections are something else – around one million animals, stuffed or preserved, are stored in halls and boxes, drawers and showcases.

Natural history collections have always formed an important basis for researchers in their scientific work. In the 17th and 18th centuries they were known as “cabinets of curiosities”. Later, from the 19th century onwards, collectors became more systematic in their methods. This Saturday, 17 November is National Natural History Collections Day, and visitors are invited to come and see for themselves this potpourri of evolution that countless explorers and researchers have amassed over many decades. (Registration: see box)

Insights into the evolution of species

Today these collections play a key role in scientific research. With the huge number of objects they contain and the long period over which they have been assembled, the collections have become true treasure troves for the study of evolution. “Natural history collections are essential sources of our knowledge about the evolution of a species,” says Martina Schenkel. Together with her colleague Dennis Hansen, she curates the University of Zurich’s natural history collection.

However, natural history collections tell us not only about how a species has developed but also provide information about changes in genetic makeup and climate, the emergence of biodiversity, and man’s influence on nature. Martina Schenkel cites just one example among many: The Zoological Museum’s collection houses a large number of ibex horns varying greatly in age. These are valuable for research, as carbon isotope analyses of these horns can be made from which data about climatic changes can be extrapolated.

Extremely old exhibits can be found in the collection which, from 1629 onwards, accumulated anything that was unusual or came from distant lands. In the beginning these were mainly objects considered exotic at the time – shark teeth, an ostrich egg or a stuffed crocodile – and were exhibited in the Wasserkirche in Zurich. The collection included a narwhal tooth that people believed to be the horn of the legendary unicorn. Also on display were animals brought back from expeditions from all over the world and donated to the collection – or animals supplied by hunters. Today the curators are proud of their large collection of birds and mollusks. Also interesting for research is a unique collection of fruit flies (drosophilids), says Dennis Hansen.

The work of the curators, Martina Schenkel and Dennis Hansen, includes cataloguing all the species and now also digitally documenting them. They are also responsible for safeguarding these valuable exhibits by preserving and protecting them from pests, damp and climatic influences. The curators’ work provides a basis for biologists and other researchers who, using morphometry, DNA sequencing and geographical analysis techniques, uncover new secrets from these animals.

The curators no longer actively collect exhibits. Although they frequently receive offers, often from private collectors, schools and zoos, the inclusion of such a donation in the collection depends to a large extent on whether it is possible to establish exactly where the animal comes from and when it lived. “Only then does it have any scientific value,” says Martina Schenkel.

Objects from the Museum’s Mysterious Depths

We will be opening our doors for National Natural History Collections Day on 17 November 2018. Come and gain a unique insight into our collection rooms and learn more about the history of the collections at the Zoological Museum, modern methods in collection work, and the significance of natural history collections today and in the future.

The number of participants per tour is limited. Please register your preferred starting time by Wednesday, 14 November 2018 at.