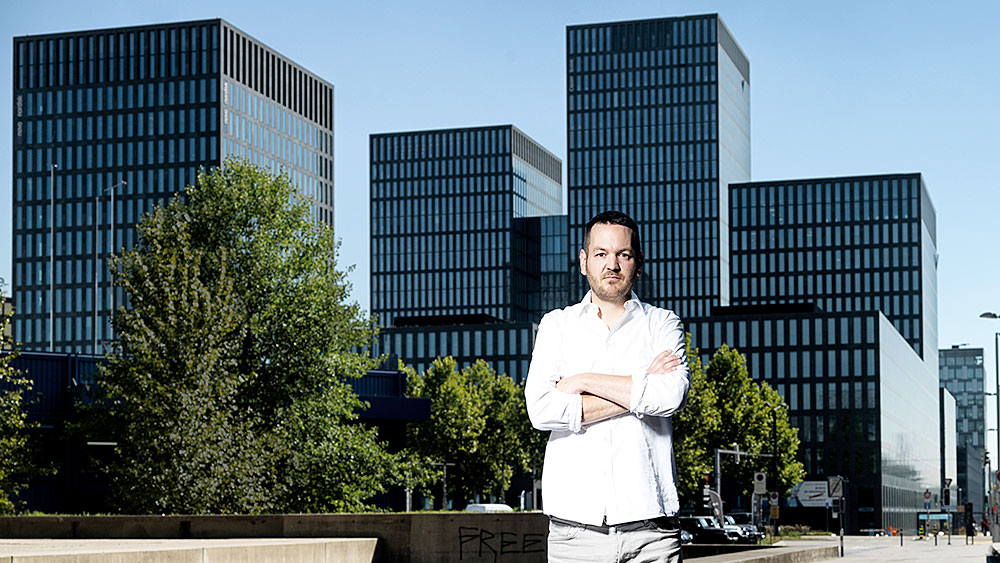 He laughs off the semi-tongue-in-cheek question and shoots me a wink. Of course he hasn't invested his money with a bank, he retorts. Stefan Leins is a social anthropologist. He is sitting casually at his desk wearing trousers and a shirt.

He got dressed up to the nines, though, for his dissertation because his research expedition didn't delve into the remote worlds of an exotic indigenous ethnic group, but instead journeyed straight into the heart of his own society. For his dissertation, Leins fixed his sights on the banking industry. One could almost call it a heart of darkness, for what goes on behind the marble façades is at least akin to a black box.

Stefan Leins, a senior teaching and research assistant at the University of Zurich's Department of Social Anthropology and Cultural Studies, spent two years conducting field research inside one of Switzerland's big universal banks. There he observed and studied traders, client advisors, compliance officers and, above all, financial analysts by actively taking part in their daily work routines.

In the evenings he recorded his observations and immersed himself in the specialist literature. He encountered a world that operates by its own unique set of complex rules and cultural codes. Rather than meeting the kind of banker that exists in our minds, he instead discovered a studiously organized hierarchical confraternity.

Leins recounts an anecdote about an intern who unwittingly violated the financial analysts' dress code by wearing cufflinks. Workers in this profession dress discreetly, almost staidly. After a week or two, one analyst opined that the intern with the cufflinks should transfer over to the client advisors, who dress elegantly when they receive wealthy customers.

The cultural code among stock-exchange traders is another thing altogether. They sit before their computer screens in the trading room dressed in sweatpants. "Trading really is an extremely physical affair," says Leins. Although open-outcry exchanges hardly exist anymore, trading on screen likewise involves bodily exertion. The traders work under stressful conditions, they shout around with telephone receivers in their hands, they move around a lot and constantly jump up and down out of their seats.

What exactly drew the social anthropologist to the financial industry? Leins breaks into a grin. No, he chuckles, even though he grew up on the shore of Lake Zurich, his parents were government employees, not bankers. But Leins invariably temped at banks while he was a student at the University of Zurich, because hourly wages there are simply better than what you can earn tending a bar.

Even back then, he explains, he had noticed that the banking world is a peculiar one. When the global crisis in 2007 rocked the financial services sector, Leins, as a social anthropologist, decided that he ought to investigate what actually goes on in the financial industry not just from an economic perspective, but also from a cultural standpoint.

Stefan Leins came to the social anthropological view in a sort of "avant la lettre" way. After graduating from the Gymnasium, he wanted to travel abroad. He spent three months living with an indigenous family in a wooden hut in the Jamaican outback, where strange, alien laws and rules reigned. Voodoo and sorcery were practiced. When someone fell ill, that person was taken to see the Obeah man, a witch doctor who employed magical healing practices.

That adventure in Jamaica left a deep impression on the young man. Out of a longing to re-experience that time, so to speak, Leins chose to study social anthropology, economic and social history, as well as Arabic. He didn’t journey back to Jamaica. He instead used his acquired social anthropological skill set to explore an area of his own society. Leins shrugs his shoulders. Geographical distinctions between the familiar and the foreign have become obsolete in the context of globalization, he stresses. The anthropological view can focus its gaze on the nearby and end up encountering the foreign there. "It's quite possible that I have much more in common with young Africans or Asians who share interests similar to mine than I do with bankers in Zurich," the social anthropologist avers.

Leins pulls a blue bound volume from his bookshelf. Stories of Capitalism is the title of his dissertation, which won a Mercator Award in 2017 and has now been published as a book by the University of Chicago Press. The specific research question posed for his investigation crystallized through field work on the premises of a bank.

The researcher had noticed that the financial analysts whose daily work routine he was actively taking part in gave evasive answers to his questions about how they arrived at their forecasts. They talked about instinct, about having to "develop a feel for the market," about having to "sense" it. Leins soon came to the realization that financial analysts' expertise and forecasts are essentially imaginary constructs, which the economics profession doesn't at all deny.

But, Leins asked himself, if analysts through their work are unable to post a better performance than simply through sheer random chance, why do they exist in the first place? What role do they play? How can a practice so controversial at root enjoy such a grand reputation? Leins leans back in his chair. Capitalism is a system based on visions about the future, he explains. He references the sociologist Jens Beckert, who postulates that all forms of capitalistic exchange have an inherent link to the future. If I give someone a loan, I envision that the loan will be repaid someday. It's the future that reveals whether that indeed happens.

There admittedly is a probability factor that indicates how economic activity might evolve, but in reality the future is largely unpredictable. That's why an institution is needed to construct possible narratives and scenarios for the future. That institution is financial analysts, says Leins.

The witch doctor in Jamaica flashes us a wink right this moment. Just like in his profession, the job of financial analysts is to present their unknowingness in a way that conveys meaning. They create narratives – about Elon Musk's latest innovation or a groundbreaking new smartphone – to make the performance of a stock price in the unpredictable future visualizable and to thus provide a matrix for investing rationally. "Financial analysts exist not because the future is foreseeable, but precisely because it isn't predictable," the social anthropologist sums up.

Stefan Leins's Stories of Capitalism is drawing a great deal of interest, even in professional circles. Leins has received invitations to lecture at forums normally reserved exclusively for economists. Between his many lectures and appearances, the social anthropologist is busy preparing for his next expedition, which will take him deep into another heart of darkness in his own country: The world of commodity trading.

In collaboration with researchers from Switzerland, Germany, England, China, Zambia and a number of NGOs, he intends to investigate the work of commodity traders as a cultural practice. Since it is difficult to gain access to their networks, Leins undertook crash-course training in commodity trading, thus opening the gates to his new area of research. It will be interesting to see what the restless researcher discovers there.

Where are you at most creative? – My creativity doesn't depend on where I am. That's why I often have a pileup of ideas on my iPhone's Notes app.

What do you do to clear your head and think up new ideas? – I go jogging on the Käferberg or listen to rap. That's my therapy.

Which famous person would you like to have dinner with, and why? – With Gillian Tett, a social anthropologist who wrote her doctoral thesis on marriage rituals in Tajikistan and is now a managing editor of the Financial Times.

Three books you'd take with you on a desert island? – The End Of Capitalism (As We Knew It) by J. K. Gibson-Graham, The Mushroom at the End of the World by Anna Tsing and A Cyborg Manifesto by Donna Haraway, because I urgently need to read up on feminist political economy.

Pen or laptop? – Laptop, hands down.

The mountains or the beach? – Neither. I confess to being pretty much a city boy.