Events Theology and Study of Religions 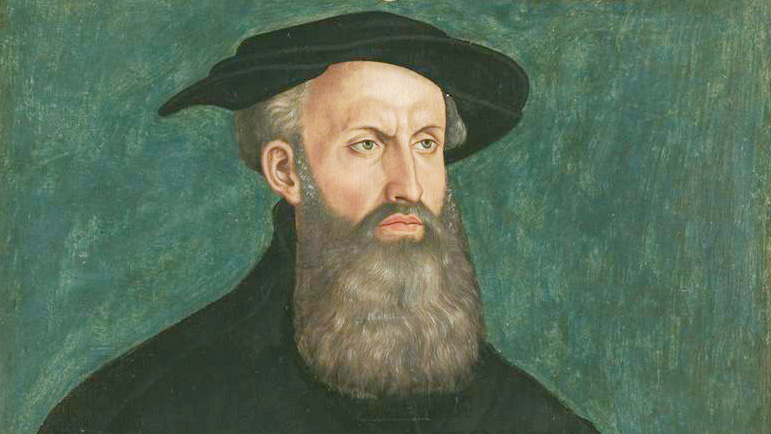 Heinrich Bullinger shaped the Reformation in Zurich from 1531 to 1575.

Peter Opitz, there’s a new exhibition about Heinrich Bullinger. Why commemorate Bullinger now, one year after the anniversary celebrations of the Reformation?

You can’t really celebrate 500 years of the Reformation in Zurich before 2019, since Zwingli became the pastor of the Grossmünster church in Zurich in 1519. Actually, celebrating in 2023 or 2025 would make even more sense, since in 1523 the Zurich city council instructed their pastors to preach according to the reformed ideas and in 1525 the Reformation was established at the institutional level. The fact that last year the Reformation was celebrated in such a big way is due to Luther and his theses, which he published in October 1517.

In Zurich, many events marking 500 years of the Reformation are taking place between October 2017 and January 2019. There will also be a scientific congress in February 2019.

What exactly were Bullinger’s achievements?

Zwingli initiated the Reformation, but it was Bullinger who continued his work. His achievement was making sure that after the defeat of Zurich in the battle of Kappel – when the entire Reformation was called into question – the Reformation would continue and be consolidated. To this day Bullinger has been in the shadow of Zwingli when it comes to recorded history. However, it was Bullinger who made a lasting mark on the Reformation in Zurich, since he was the pastor at the Grossmünster church from 1531 to 1575. And many people don’t know that Bullinger founded the Schola Tigurina, which later became a part of the Collegium Carolinum, which had a theological, philological, and philosophical department. The Schola Tigurina was the nucleus of today’s University of Zurich, so to speak, which in a way means that the University can be traced back to the work of Bullinger.

What kind of a person was Bullinger?

Bullinger was a humanist. His education and his protestant faith radiated across much of Europe thanks to his written work. He was a key figure of reformed Protestantism, which becomes apparent if you look at his international contacts. In terms of quantity, his body of correspondence might be the most comprehensive of the entire 16th century. His work is exceptionally significant from a historical, theological, and cultural point of view. As for what kind of a person he was, he described himself in a courtship letter to the woman who would later become his wife:

“This also means that I’m somewhat irascible, but not malicious or opinionated, I am indeed capable of giving in and soon forgetting, and neither do I keep company with bad people who would lead me to gamble or drink. So now you can imagine who you would be dealing with should you be prepared to bear the sourness and sweetness of life by my side.”

How many letters did Bullinger write?

There are about 12,000 preserved handwritten letters in his correspondence. Around 2,000 of these were written by Bullinger himself, while the others are addressed to him, mostly in Latin. Bullinger’s correspondence is managed by the Institute of Swiss Reformation History at the Faculty of Theology of UZH.

The coming exhibition will be about Bullinger and his correspondence. Isn’t it difficult to display texts?

It is, which is why the curators have adopted a different approach. No old manuscripts will be on display. Instead, a large art installation will focus on a topic from one of Bullinger’s letters, namely a description of how lightning struck the Grossmünster and caused a fire. The exhibition will also showcase objects created by artists.

And there will also be an informative brochure complementing the exhibition that visitors can take home. It contains very well-presented information about Bullinger’s letters and contacts as well as his life in general.

The correspondence of Zurich reformer Heinrich Bullinger is of great importance. With approx. 12,000 letters, the corpus of Bullinger’s correspondence is probably the largest of the 16th century. It covers more than half a century, from 1524 to 1575, and offers unique insights into the Reformation period. In addition, it documents the key role of Zurich in Europe at the time.

Over the past years, about a quarter of Bullinger’s letters have been published by the Institute of Swiss Reformation History of UZH, with the support of the Swiss National Science Foundation and the Zurich state church. However, the project can only continue if new funding is found. The aim is to continue the project by using the latest technologies. For example, digitalization projects are to make this treasure trove of letters, which are hidden in the Zurich archives, more available to the global public.

Moreover, a further batch of letters is to be published in book form, and this is only possible with the work of highly specialized scholars.

The opening of the exhibition will take place on 17 May.