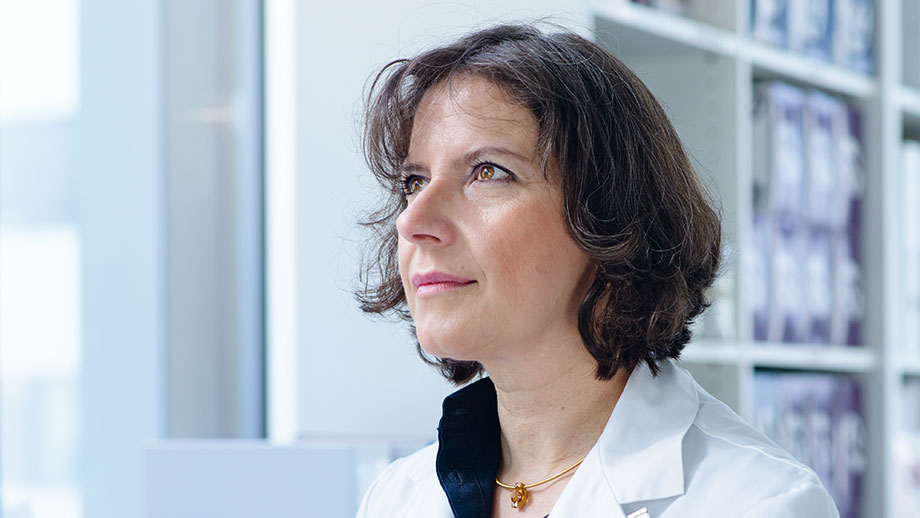 Anita Rauch
“Our knowledge of which gene mutation results in what type of disorder has grown exponentially over the past years”: Anita Rauch (Image: Marc Latzel).

Anita Rauch conducts her research on the first floor of a modern glass and concrete building in the Bio-Technopark in Schlieren. This is also where she meets her patients during office hours. Rauch is the Director of the Institute of Medical Genetics of UZH. Already as a medical student, she had a strong desire to find out why people fell ill in the first place, why diseases can develop very differently, and why patients respond differently to one and the same treatment.

Going into genetics was thus a natural choice for her. By the time she completed her studies in 1994, research in this field was just about to take off. And yet, at the time decrypting the human genome was still considered a pipe dream. Of course, we now know that this dream came true faster than most had expected. The blueprint of human life has been considered decoded since 2003.

Genetics also notched up major successes in other areas. “In the early 1990s, we knew the molecular cause for only a handful of genetic diseases in children. Today we know about 3,000,” says Anita Rauch. A similarly dramatic increase in knowledge can also be observed when it comes to diseases in adults.

Scientists are discovering more and more connections between genetic defects – or mutations – and diseases. And they’re getting better and better at interpreting these disorders. “Our knowledge of which gene mutation results in what type of disorder has grown exponentially over the past years,” says Rauch. This opens up new opportunities for more sophisticated diagnoses and thus also for increasingly targeted therapies. The precision with which diagnoses are made is a small victory on the path towards therapies that are as tailored as possible, says Rauch.

For example, we now know that tumors aren’t as uniform as previously assumed. Cancerous growths are made up of a number of parts in which degenerated cells with different mutations gather, and where other changes in the tissue can also be observed. Researchers are now able to examine these characteristics in greater detail.

And it doesn’t stop there: They can even home in on a single cell and analyze its role in the development of cancer. This kind of expertise from basic research opens up a whole new world of possibilities when it comes to working on new and improved therapies. “In 10 years, we’ll be able to get an in-depth understanding of any tumor and its causes,” predicts Anita Rauch, “but we’ll also be able to determine how likely it is that it will spread – or metastasize – and which therapy we can use to successfully fight it.”

Already today, the medical geneticist can use her analysis to give advice for tailored treatments. Only 15 years ago, genome sequencing, the decoding of our individual genetic profile, which consists of about three billion units, was incredibly time-consuming. This has changed: Today such an analysis can be performed in a relatively short time and at comparably low costs.

Rauch and her team are for instance examining blood samples taken from breast cancer patients. Depending on the type of tumor, today a congenital mutation in the breast cancer genes that cause the disease can be found for up to 15 percent of patients. The most common are BRCA1 and BRAC2, which also became known to the general public through actress Angelina Jolie.

The efficient gene tests performed in Rauch’s lab also influence therapy. One way to combat breast cancer is to irradiate the tumor. However, as a result of mutations in the relevant genes, the radiation triggers the body’s repair system, which then protects the tumor cells. By knowing about these mutations in advance, this unwanted protective mechanism can be switched off through medication, so-called PARP inhibitors. “This way, the radiation doses can be reduced,” explains Anita Rauch, “the tissue is spared but the cancer is still countered effectively.”

Individual disease prevention is an important topic during Anita Rauch’s office hours at the Institute of Medical Genetics. “Good therapy is worth a lot,” says the physician, “but not needing any in the first place is even better.” In her office, she often sees women who come from families that have an increased risk of developing breast cancer. If there’s an increased risk from genetic changes, it makes sense to go in for checks more frequently and for example to perform magnetic resonance imaging once a year even on young patients.

This way, pathological changes can be detected early, which means they can be treated better and less aggressively. Clinical studies are currently looking into how the risk of developing a tumor can be reduced for women who have such mutations. “Strong preventive healthcare can also prolong lives when it comes to other hereditary cancer risks,” says Rauch.

She adds that the initiative of the Swiss Personalized Health Network (SPHN), where she’s a member of the management committee, offers a promising way forward for medicine. The aim is to prepare health data from labs and clinics all over Switzerland in a way that allows the data to be used in aggregate form for research purposes – with the patients’ consent, of course. In the long run, this should also improve treatment options. “By combining the data of all patients in Switzerland who are suffering from a specific tumor and are undergoing the same treatment, and by comparing and analyzing all these cases in detail, we can increase the likelihood of recognizing how things hang together,” says the researcher.

This treasure trove of data, which will become available through the SPHN in the years to come, is supposed to inspire researchers to come up with innovative ideas and surprising hypotheses for basic research. This could provide research with a considerable boost and further propel the success of research into the treatment of cancer and other diseases.