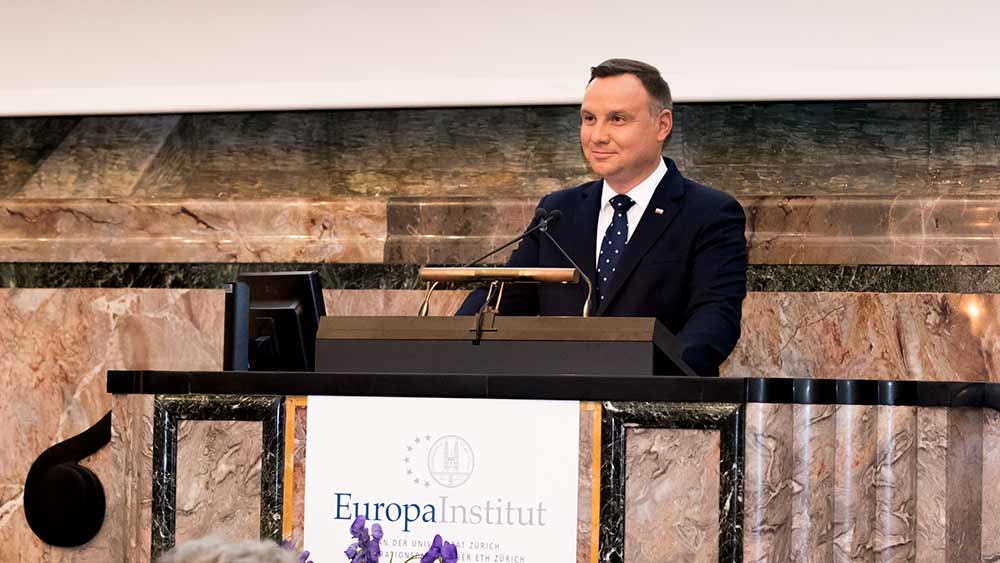 Staatspräsident Andrzej Duda
“We were cut off from the West,” Andrzej Duda, President of Poland, in UZH’s main lecture hall. (Picture: Helen Ree)

The visit by Andrzej Duda, the current President of Poland, drew a large crowd, with the main lecture hall filling up with listeners very quickly. But before he could begin his talk, a few protestors stood up and chanted “Konstytucja!” (constitution), referring among other things to the constitutional referendum that Duda launched earlier this year as well as his controversial removal of Polish judges. The protestors were soon accompanied out of the lecture hall by security staff.

Winston Churchill held two speeches in 1946 that went down in history, began Duda. Churchill’s speech in Zurich focused on the future of Europe. In his other famous speech from 1946, in Fulton, Missouri, the former British Prime Minister warned of Soviet expansionism in Eastern Europe, coining the term “Iron Curtain”, which had descended across the European continent. “Poland was in no position to be part of any unification, because our country was in the Soviet’s sphere of influence,” said Duda.

The Cold War meant that Eastern Europe was cut off from the West, not only in terms of area but also politically, continued Duda. “This created an unnatural fracture in the European world.” With this separation, the Soviet Union had achieved one of its main goals: The division of Europe became a fact, which started to penetrate the minds of Europeans. Over decades, the countries behind the Iron Curtain were considered less European by societies in the West. “When we joined paths again in 1989, we not only had to overcome the geopolitical rift with the West, we also had to fight against misunderstandings and false stereotypes of our cultural otherness,” said Duda. It is very painful for Poles to have to hear in the political rhetoric of today’s leaders the echoes of stereotypes rooted in the Iron Curtain-era Europe. “We cannot follow these footpaths. Recreating false divisions in Europe will always work against the idea of a united Europe that Churchill put forward in his Zurich address.”

Seven decades after Churchill’s speeches, Europe is faced with new challenges, such as Brexit or the eurozone financial and migrant crises, said Duda. “The EU is losing people’s trust.” Duda then went on to talk about the three pillars that he believes the EU should stand upon to overcome these challenges: Equality, ethics and freedom.

The first pillar is the community of equals and mutual respect among all nations. For Duda, Poland’s eastern neighbors should be brought closer to the EU and to the West, in particular Ukraine and Georgia. “These countries should become part of the EU, we owe them our support.”

Freedom as the highest value

The second pillar of Duda’s vision for Europe is the community of ethics, and values such as loyalty, solidarity and forgiveness. Only by sticking to common values could society regain its trust in European integration, as this meant that people would accept and contribute to political decisions.

The third pillar of the European community should be freedom, continued Duda. “The current generation of Poles is the first in 300 years to live in freedom.” And today, Poland is becoming a rich and developed economy. Duda said that Poland sees itself as a stronghold of European integration, as evidenced by the very large popular support for the European Union. “We want a strong Europe,” emphasized Duda. And referring to Brexit and other negative developments, Duda concluded: “It’s high time to rescue Europe.”

Andrzej Duda and the Churchill Symposium

Andrzej Sebastian Duda was born in Kraków in 1972 and has been the President of Poland since August 2015. The administrative lawyer was a member of the Sejm chamber of the Polish parliament from 2011 to 2014, and a member of the European Parliament for the European Conservatives and Reformists Group from 2014 to 2015, having worked for Jarosław and Lech Kaczyński in the past.

Duda had previously been legal adviser to the Law and Justice Party (Prawo i Sprawiedliwość, PiS) in the Sejm in 2005, and later became Deputy Minister of Justice and then a member of the Polish State Court as well as Undersecretary of State from 2008.

The first Churchill Symposium took place in 1996 on the occasion of the 50th anniversary of Sir Winston Churchill’s speech in Zurich. Since then, the Europe Institute at the University of Zurich has organized the annual conference together with the Swiss Institute of International Studies. This year, it was co-organized with the British Embassy and Bank Julius Baer & Co. Ltd. The event sees high-ranking guests from international politics and business come together to discuss current issues of European integration.