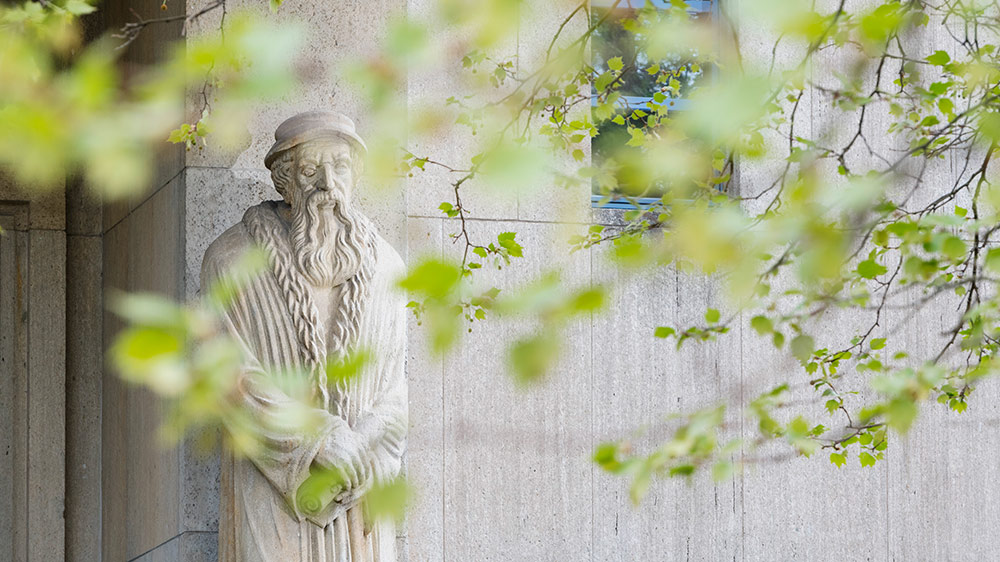 Statue of Zurich reformer Heinrich Bullinger at the entrance to the Paulus Church in Zurich. (Image: Ursula Meissner)

Heinrich Bullinger began writing letters at the age of 20. By the time he died half a century later, he had amassed correspondence amounting to around 14,000 letters, an average of five a week. “It’s not that many compared to the number of e-mails that we send today,” says Reinhard Bodenmann of the Institute of Swiss Reformation History. But letters in the 16th century were a bit longer and more carefully composed than today’s electronic equivalent.

Reinhard Bodenmann is an ecclesiastical historian and is leading a project to publish Bullinger’s correspondence. For the past nine years, he and two colleagues have been editing and annotating the handwritten letters – those sent by the Zurich reformer as well as those Bullinger received from his 1,200 or so correspondents in Germany, France, England, Scandinavia, Eastern Europe and Switzerland. Bodenmann was not the first to take on this mammoth task: In 1904, members of the Zurich Zwingli association began transcribing individual letters from Bullinger. In 1964, the work was professionalized under the aegis of the newly founded Institute of Swiss Reformation History. The first volume of letters finally appeared in 1973. There are now 19 volumes, but the end is still nowhere near in sight: Of the 12,000 preserved documents, most of which are stored in the Zurich State Archives, only around 3,000 have been published to date. It’s no wonder when you think that each of the 1,200 people with whom Bullinger corresponded had their own handwriting style, which first has to be decoded. The letters are written in Latin or in Early New High German, which means that alongside transcribing and annotating the texts with numerous footnotes, it is also necessary to write comprehensive summaries in modern German.

Intimate insights into the epoch

Is all that effort worth it? For Bodenmann there’s only one answer: “Definitely. Letters are important historic sources, often more important than printed books. They provide a more intimate insight into the epoch.” In Bullinger’s correspondence, an enormously diverse group of people from the farthest-flung corners of Europe discussed the most pressing questions of the day – and not just religious ones. Bodenmann estimates that around 80 percent of the letters to and from Bullinger relate to politics, society and personal stories.

After Zwingli’s death, Heinrich Bullinger took over his position as pastor of the Grossmünster and head of the church in Zurich. In this role, he wove a dense web of communication with which to carry his reformatory ideas out into the world and to discuss them with like-minded people and dissenting voices alike. Alongside Calvin and Luther, Philipp von Hessen, Francis II of France, Henry VIII of England and Christian II of Denmark were among Bullinger’s correspondents.

“Heinrich Bullinger was like the radio of his time,” says Reinhard Bodenmann. “Every week he received news from his letter-writing partners about the latest events and developments in the neighboring countries.” Zurich’s mayor and the councils regularly asked Bullinger to report to them about what was going on beyond the city boundaries. Zurich politics relied on Bullinger and his information; Bullinger’s role as head of the church was thus at least as influential as that of the city’s official leader.

So why don’t we know more about this man? Why did he remain in the shadow of Zwingli? “Bullinger didn’t actually stand in Zwingli’s shadow. It’s rather that he was forgotten by history after Zwingli,” says professor of theology Peter Opitz, who as head of the Institute of Swiss Reformation History is also involved in the publication of Bullinger’s collected works. And he admits: “I too knew little about Bullinger at first, even though I did a doctorate in reformed theology.”

Ulrich Zwingli was the pioneer who sowed the seeds of the Protestant Reformation. He died in 1531 at the age of 47 in the Second War of Kappel, leaving his life’s work unfinished. Heinrich Bullinger took over where Zwingli left off, consolidated his work, and brought Zwingli’s crop to fruition. He did so prudently, adeptly and persistently.

The Zurich reformers knew and liked one another. In 1528, Bullinger accompanied Zwingli, 20 years his senior, to the Bern disputation, following which the city on the Aare recognized the Reformation. Bullinger and Zwingli were of the same opinion in many matters, but not in all. Even though Bullinger always defended his famous predecessor after Zwingli’s death, he was not just a Zwingli devotee, says Opitz. “He was an independent thinker with his own views.”

Bullinger was more concerned than Zwingli, Calvin and Luther with building peace between the Christian confessions – he was an early defender of what we would now call ecumenism. Luther’s sharp-tongued attacks on the Zurich Reformation were always met by Bullinger with objectivity and tolerance. Peter Opitz: “In contrast to most of his theological contemporaries, for Bullinger the shared Christian faith was the most important thing. However, in a time of religious polemics and divisions, that meant he was not very useful as a mouthpiece for his confession.”

Despite his reticence, Heinrich Bullinger helped to shape life under the Reformation across Europe. As mentioned, his letters tackled religious and political questions alike, but they also touched on everyday topics, such as: How should Reformed Christians behave within marriage, or when they are ill, or when they appear in court? These sorts of questions were preoccupying the new Reformed Christians not only in Zurich, but also in other parts of Europe such as the Netherlands, England and Hungary. Bullinger wrote guidance on such topics. His House Book, with its 50 sermons on aspects of faith, became compulsory reading for English clergymen, and was even taken on merchant ships so that its influence reached the East Indies and the Americas as early as the 17th century.

Even less known than his Reformation work is Heinrich Bullinger’s activity as an important chronicler of history. At the end of May this year, his Tigurinerchronik is appearing in print for the first time – another project of the Institute of Swiss Reformation History. On 1,800 handwritten sheets in a folio format similar to A-4 size, Bullinger describes the history of Europe and of Zurich from the Roman Empire to his time, drawing on a rich variety of sources.

And the letters? The undertaking has stalled. The Swiss National Science Foundation, which together with the Canton of Zurich Reformed Church funded the publication of Bullinger’s correspondence until now, no longer supports such long-term projects. “The trend for short-termism is endangering our plans,” says Reinhard Bodenmann. “For a project like this, we need the staying power and perseverance of people who once built cathedrals.”

Luckily, there is an alternative option. Several years ago the editors of the letters committed to a policy of open access. Instead of being printed, the remaining Bullinger letters will now only appear electronically, with a digital search function replacing an analog index. This will reduce the workload and save on production costs. “In this way, we can make 140 letters available in one year,” says Bodenmann.

But even a digital version costs money. Efforts are underway to find donors through the UZH Foundation (see below). Christoph Sigrist, pastor at Heinrich Bullinger’s erstwhile workplace the Grossmünster, has also offered to support the fundraising campaign. “Christoph Sigrist is very well connected,” says Reinhard Bodenmann. Just like his 16th century predecessor.

A historical Treasure Trove for Zurich

The correspondence of Zurich reformer Heinrich Bullinger is of extraordinary significance. With around 12,000 letters, it is by far the largest preserved collection of letters of the 16th century. The letters offer a unique glimpse into life at the time of the Reformation. They also document the central position of Zurich in Europe at that time. Around a quarter of Bullinger’s letters have been published in the last few years by the UZH Institute of Swiss Reformation History.

The aim is to edit more letters, and to digitalize and publish the whole collection of correspondence so that it can be accessed by people all over the world. The UZH Foundation is supporting this project with a fundraising campaign.

Zurich reformer Heinrich Bullinger corresponded with people across Europe, and his letters document the history and culture of the Protestant Reformation period in Switzerland. A new exhibition at the University of Zurich with an accompanying book and program of events shows the influence of Zwingli’s successor on the interpretation of events of that time.

The exhibition Florian Germann: Die Stral / Nachrichten von Heinrich Bullinger is on display in the West Foyer of the UZH main building until 24 June. Program available at www.diestral.ch.