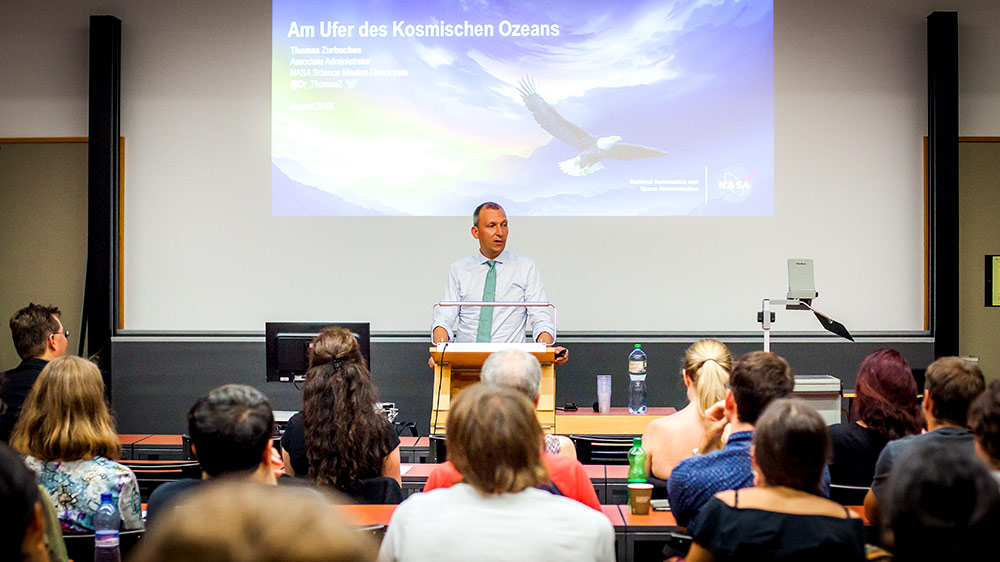 NASA research director Thomas Zurbuchen at his talk at UZH: "Discovering the secrets of the universe is one of the most important activities we could be doing as humans, because it is researching who we are, where we come from." (Image: Fabio Schönholzer)

Through its combination of airfield and laboratory, the Dübendorf-based UZH Space Hub wants to make research take off. The hub, which is part of the Innovation Park Zurich, works hand in hand with national and international partners from research and industry as well as the Swiss Air Force, bringing aviation and space activities together in one site. Several research projects have already been initiated since its launch earlier this year. “We’ve created the nucleus. Now we want to establish ourselves as the Swiss hot spot for space research and development,” says Oliver Ullrich, director of the UZH Space Hub. 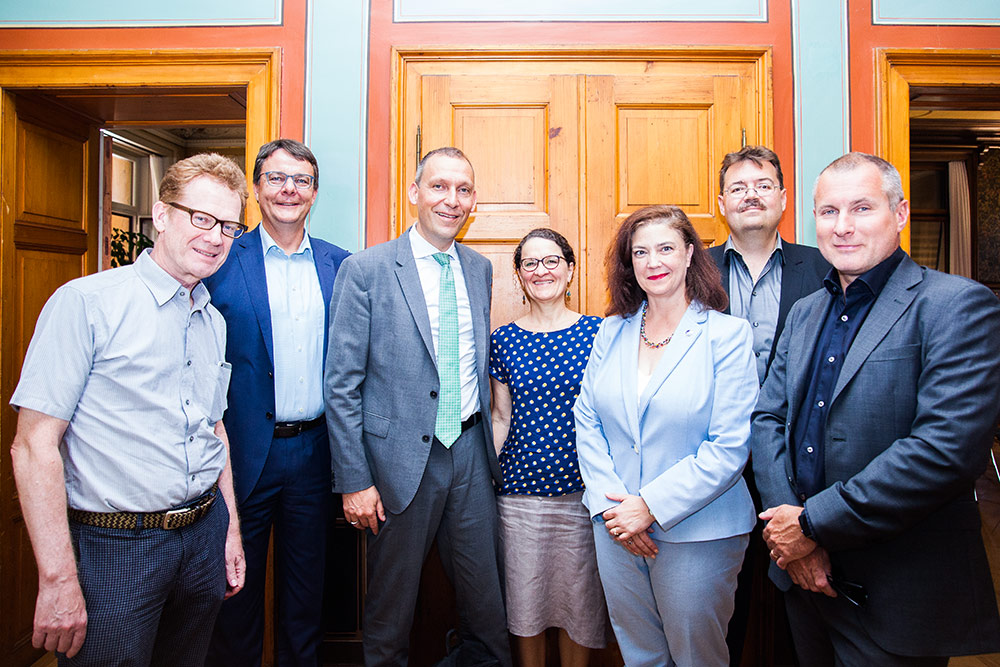 High-ranking visitor from the US

UZH’s reaching for the stars has not gone unnoticed: Last Wednesday, Thomas Zurbuchen, Associate Administrator for the Science Mission Directorate at NASA, visited UZH. Zurbuchen, who grew up in Heiligenschwendi above Lake Thun, is the first Swiss to become research director at NASA. He leads a team of over 8,000 scientists and oversees a research budget of around six billion US dollars.

Zurbuchen is responsible for coordinating the medium and long-term science programming strategy. While researching the secrets of the universe might not directly affect the everyday lives of people, it is nevertheless one of the most important human activities, says Zurbuchen: “We are researching who we are, where we come from.”

Of course the UZH Space Hub cannot measure up to the achievements and accomplishments of NASA; and yet the fledgling center of competence shares some of the same research priorities, such as earth observation, space life sciences, astrophysics and aeronautics. Zurbuchen’s visit was thus also an opportunity to showcase current research projects.

These include a variety of earth observation projects led by Michael Schaepman, professor of remote sensing and Vice President at UZH. His research group uses special sensors attached to airplanes and drones to observe earth from above, which for example provides them with insights into a forest’s biodiversity or the chemical composition of plants. A long-term and comprehensive documentation of biodiversity is a crucial instrument for policy-makers when it comes to protecting our planet’s ecosystem.

Oliver Ullrich’s research priority, in contrast, is on space life sciences. With his team, he investigates the effects of gravity and weightlessness on the human organism and its functions with the aim of improving the health of astronauts in outer space and providing important insights into preserving human health in old age.

In the field of astrophysics, the UZH Space Hub has set its sights on researching the various puzzles of the universe. For example, UZH astrophysicist Ravit Helled is involved in NASA’s Juno mission, which aims to unravel the origins and evolution of Jupiter, while fellow astrophysicist Romain Teyssier is researching aspects of the ever-accelerating expansion of the universe as a member of the European Space Agency’s (ESA) Euclid mission.

What’s more, Philippe Jetzer of the Department of Physics of UZH has been collaborating with ESA and NASA since 2003 on developing measuring techniques to observe gravitational waves in outer space using satellites. The preliminary project LISA pathfinder was successfully completed in 2015, and work on the follow-up mission LISA (Laser Interferometer Space Antenna) is well under way.

NASA’s research director Zurbuchen expressed his enthusiasm for the research that’s being performed at UZH and its ambitious goals. His visit could open the door for further promising collaborative endeavors. He also had a number of suggestions as to how UZH’s still young project could continue to make its mark. In particular, he highlighted the necessity of attracting and retaining the brightest young students and graduates at the UZH Space Hub. Last but not least, he mentioned the importance of further expanding the ability to access space easily.