This article was first published in UZH Magazin 2/18. 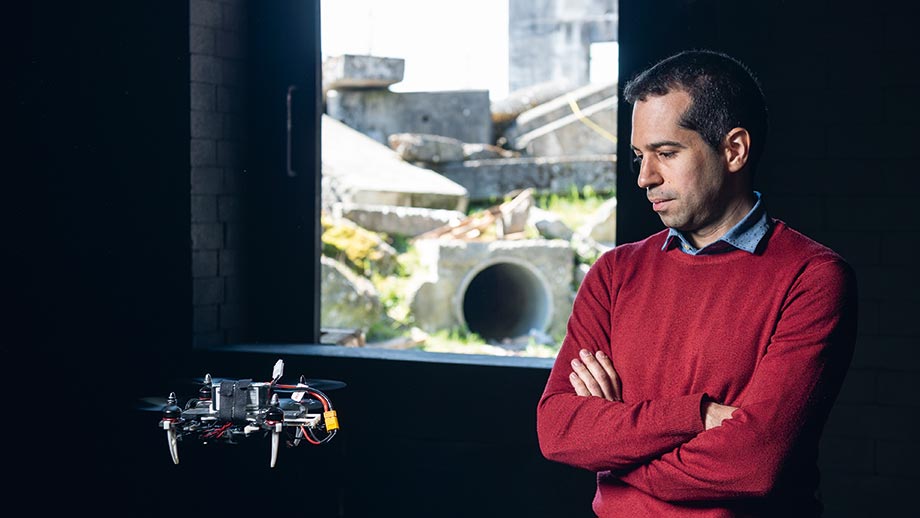 Mini machines, zipping through the air, are nothing new. Remote-controlled helicopters have been around for decades – and are not leaders of their class in the model aircraft business for nothing, considering all the practice required to make these little gadgets hover and fly with control and precision.

But then the drones came. And – surprisingly – seemed to fly all by themselves, thanks to their ability to anticipate and thus do most of the work themselves. The pilot does little more than set the direction and speed. A piece of cake…with the on-board steering and stabilizing electronics taking care of the actual job of flying. After becoming sufficiently small and powerful around 15 years ago, huge numbers of astoundingly agile quadcopters entered the market that could maintain stability even in windy conditions.

The next step was then only logical: To get rid of the pilot completely. Start-up entrepreneurs predict that it will be no time before we see significant numbers of drones flying through our cities, and fully autonomously at that. They will examine the fabricof buildings and bridges, measure traffic flows, and transport all manner of goods, without assistance and without question. What may have sounded like science fiction a few years ago will soon be an everyday occurrence – the noise of drones buzzing in the background against the whoosh of the traffic.

Davide Scaramuzza is not entirely convinced of this grand vision of the future, even though the Italian can be called something of a drone guru. A professor at the University of Zurich's Department of Informatics, he and his group have just caused a stir in expert circles and the international press after teaching a drone to navigate effectively throughout the city by showing it correct behavior in street canyons. The method applied is today's hot topic: Neural networks and deep learning. When adequately equipped and trained – i.e. when presented with enough meaningful examples – drones can teach themselves what is important.

As if by magic

Machine learning algorithms have made a quantum leap in recent years, as was also demonstrated by Scaramuzza's small quadcopter which, loaded with a camera eye, has learned astonishing skills with training from his team. The researchers fed the neural network – and this is where the research gets exciting – not with data from flight maneuvers but from countless hours of bike rides and car drives through Zurich. The driver's perspective – the view of the surroundings in the direction of travel as well as data on the speed of travel – was sufficient to enable the artificial drone brain to draw conclusions and consequently follow a lane all by itself as well as react to obstacles.

The researchers found the car videos on the internet, and used them to teach the drone to steer its way through the city. And with their own bicycle videos they showed the drone when it needed to be careful. A pedestrian in the way? The cyclist stops –the drone remembers this and then does the same. The training worked so well that the drone found its way even in environments not included in the "official training program". For example, when the researchers tested it in an underground car park it had no trouble avoiding walls and followed the lanes as if guided by an invisible hand.

As a result, the researchers had killed two birds with one stone: On the one hand they were able to show that artificial intelligence today is quite capable of mastering a comparatively complex task such as navigating alone in an urban space, without the need for a giant computing tool.At the same time, they had found an elegant solution to a problem that has long been a problem for machine learning experts: Where to obtain the training data required to achieve a useful learning outcome? Successful deep learning depends entirely on the quality – and also often the quantity – of the training data. And to gather enough flight data, the researchers would have had to invest vast amounts of working hours. Evaluating data from street traffic that is incurred practically incidentally presents a much simpler solution.

So, are drones now demonstrating what autonomy in mobile machines means? Many drone influencers see their industry as the experimental ground for potential social upheaval: The next step after the automobile so to speak – from things that move themselves to things that move unaided. However, we're still a long way from an autonomous machine in the literal sense – as this would then set its rules itself.

Hair-splitting aside, this year's Mobile World Congress in Barcelona made it abundantly clear that the industry's leaders are just brimming with confidence and pioneering spirit. Take the example of Ran Krauss, CEO of the Israeli start-up Airobotics, who presented his autonomous inspection drones, hinting rather vaguely that they were already being deployed in various mining companies and large industrial concerns. As a result, the drones were learning much that could be applied to a city space one day. Krauss thus believes that all the current talk about autonomous vehicles focuses on the wrong topic and foresees that we will have long got used to the sight of drones sweeping overhead before self-driving cars ever become part of our lives.

Lost in a forest

Scaramuzza is more skeptical, suspecting that the drone euphoria harbors commercial interests too. Even though his DroNet drone mastered its tasks with ease, the tests have also shown the limitations of the method, and at the same time an insight into this artificial brain: DroNet likes clearly drawn lines. Through the training, the neural network learned to pay particular attention to such lines in the environment "but in a forest DroNet would get pretty lost," Scaramuzza believes.

No matter how we look at the future of drones, whether from a disruptive-optimistic view or with scientific caution, one thing is sure: For research, the challenge is a fascinating one. How does the drone find its way, how does it know where it is, and how does it recognize its surroundings? In terms of theory, we have known how best to solve the problem for around 30 years, says Scaramuzza. Experts call it "Simultaneous Localization and Mapping" (SLAM). But only in the last few years has the theory actually worked with reasonable reliability in practice, meaning that the cars or drones can move through a space unknown to them, and make a constant picture of where they are and store it. The latest breakthrough has revealed that with artificial intelligence SLAM is now also possible with just simple cameras. Up to now, researchers were dependent on the much heavier, more complex and energy-intensive LIDAR laser technology that scans the environment with great depth of field. LIDAR is still standard for cars, but a simple camera is much better suited to drones.

To really test the method's advances, Scaramuzza avoids urban areas, preferring safely fenced-off areas. Ideal for this is the recently opened meeting and information center, the Innovation Park Zürich in Dübendorf. Here the researcher can test his smart drones over wide open spaces and under real conditions, indoors and outdoors, with exercises such as delivering goods with centimeter precision. In addition, there will also be alternating regular flights and drone activities on this former military airfield enabling also unmanned traffic management to be tested.

The basic mission of the researchers is to make drones more robust and therefore safer in their job, as safety is undoubtedly of key importance to the social acceptance of autonomous systems. "99.9 percent accuracy is simply not enough," says Scaramuzza. While expecting machines to function faultlessly is one challenge, the deep learning architecture holds another quite different one, namely that it is precisely the most dangerous situations that will be the ones the most difficult for artificial intelligence to master. How can a drone be taught good accident behavior? Accidents are exceptional, unexpected situations, for which only few training data are available.

This explains why Scaramuzza does not necessarily see the first concrete fields of application for autonomous drones in everyday situations but rather in extreme ones: They could soon provide valuable services in search and rescue operations, sweeping over impassable terrain and penetrating deep into destroyed buildings. He and his team want to simulate such missions at the Innovation Park Zürich and create the best training conditions possible for the hungry neural networks.

Civil Drones – Selfies from the Air

In which field of application will civil drones first make their breakthrough? Transport, surveillance, inspection? Or will it be up to consumers again to ensure the vital progress needed – and the acceptance of a new technology?

Davide Scaramuzza's vote goes to the American start-up Skydio which recently presented its autonomous R1 drone, a stunning piece of high-tech with 13 "eyes" and whose one job is to follow every movement of a person jogging, skiing and jumping over obstacles, all the while shooting a cool video –  a tribute to the selfie generation. And, thanks to deep learning, R1 fulfills its task with remarkable skill, despite changing light conditions and overhanging branches.