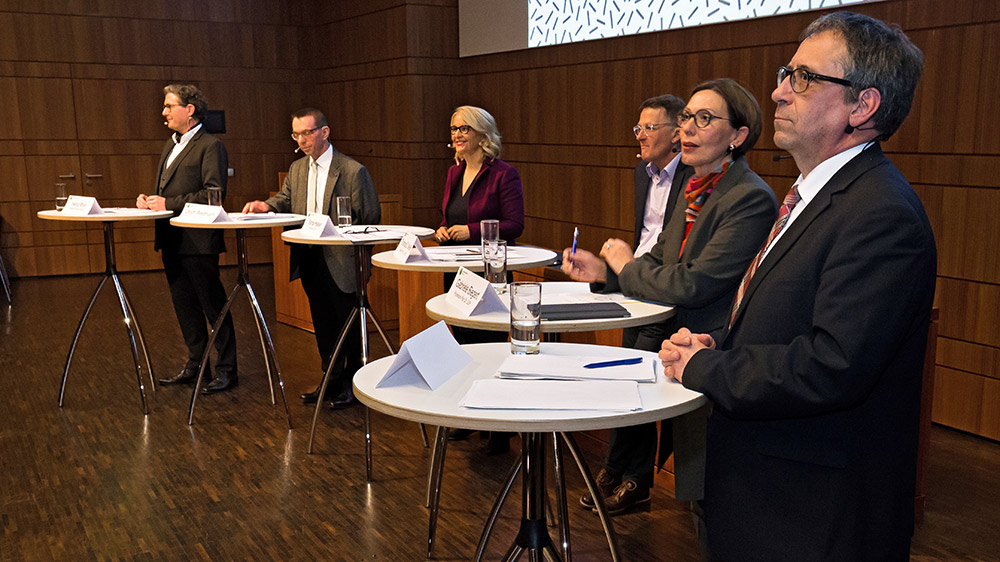 Switzerland aims to half its greenhouse gas emissions by 2030. In doing so, it would meet the aims of the Paris climate agreement. But what contribution can higher education institutions make to this target? This was the question tackled by a panel last week, staged as part of the Zurich Sustainability Week.

A question of attitude

All the participants on the panel thought the efforts of their institutions in the area of sustainability were basically satisfactory, but did acknowledge that there was some room for improvement.

They pointed out that sustainability in higher education institutions has already seen some positive developments: For example, UZH rents property in buildings that meet the Minergie standard and produces increasing amounts of solar power, while PHZH has moved into a modern new building and recommends that its employees only use flights for business trips if the distance is more than 600 kilometers.

In general, flights taken by employees are one of the biggest causes of carbon dioxide emissions. The universities are dependent on their employees choosing the more environmentally friendly option for their business trips, pointed out Jean-Marc Piveteau, President of ZHAW. However, he was against the idea of bringing in further rules and regulations for staff and students: “We have to change people’s attitudes rather than introducing more rules.” For Piveteau, sustainable thinking and behavior were a question of mindset and couldn’t be forced.

Some students expressed the conviction that sustainability should be more integrated into teaching at the universities. However, the panelists deemed an introductory lecture on sustainability to be unnecessary, saying that such topics were already included in specific courses at the different institutions. For example, designers worked together with material scientists, trainee teachers had to tackle sustainability topics in the new curriculum Lehrplan 21, and “green” subjects were also taught in the area of life sciences. At UZH, without the university having issued specific instructions in this regard, research centers had formed looking at issues such as sustainable finance, among others, noted Siegert. She doubted, however, whether it would be useful to give a lecture on sustainability to music students, for example.

In the subsequent Q&A session, the panelists addressed the critical questions coming from the audience. In particular, the core role of the universities was discussed, and the question of how far they should go in guiding their students towards sustainable behavior. In the end, a consensus was reached: Universities do have a role model function in regard to sustainability, but should avoid being too prescriptive through regulation. Rather, they should work together with students to find the way to create a more environmentally friendly university environment. Events such as the Sustainability Week, which was the initiative of over 100 students, were steps in the right direction.

The Zurich Sustainability Week (NHWZ) has been a success story since 2013. Until this year, however, there was no link between it and other similar initiatives across Switzerland. The Swiss Sustainability Week (SSW), planned by the committee of the Swiss Association of Student Organisations for Sustainability (VSN), is now making use of this potential and has initiated sustainability weeks around Switzerland at various higher education institutions, thereby supporting the long-term establishment of such ventures. The aim is to promote the subject of sustainability at all levels of Swiss higher education institutions and of society. The SSW also supports the implementation of the national position paper of the Swiss Student Union (VSS) and the VSN in the associated institutions so that they and their students can be role models in the area of sustainability. The events staged by each of the local sustainability weeks serve to educate and inspire their visitors, which will contribute to a transformation in society in the direction of sustainable development. The first SSW took place from 5 to 10 March 2018, and will henceforth be an annual event, with maybe even more associated activities in the future.