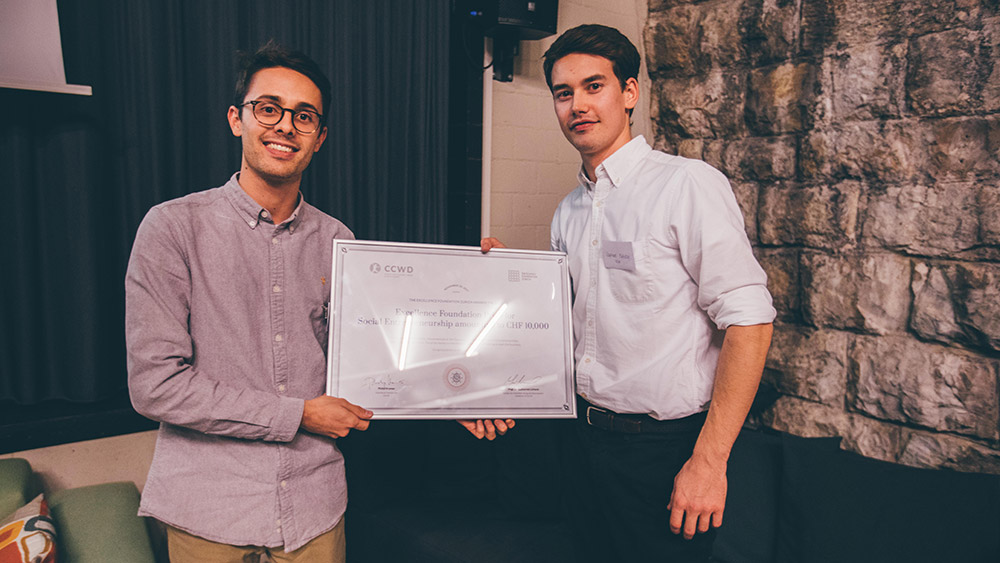 the awarded group
Rúben Marquillas (left) and Raphael Metzler (right) of EDUCAM were awarded the prize money of CHF 10,000 for their project which focuses on incentives to increase teacher attendance in schools in South America. (Image: David Hubacher)

Saving the world while still making a profit – what sounds like a hollow promise from large corporations is in fact a very real goal for social entrepreneurs. An increasingly popular model for new start-ups, social entrepreneurship is making a positive and sustainable impact bringing about social and/or environmental transformation in places that need it most – in short, providing concrete solutions for real problems. For the first time, the University of Zurich now offers a seminar in which students not only acquire first-hand knowledge of what it means to become a social entrepreneur, but also have the chance to implement their ideas and be awarded CHF 10,000 to kick-start their business. Last Monday, the 13 students who attended the seminar pitched six projects to a jury.

Business ideas to make the world a better place

The seminar, held by Prof. Guilherme Lichand at the Department of Economics, introduces a new didactic concept that aims to provide students with the chance to put their academic knowledge to the test in a real-world scenario. Inspired by Harvard’s President’s Innovation Challenge, the students are challenged to develop a social business idea that has the potential to make the world a better place – and receive funding from investors. In the first year of the seminar, the Excellence Foundation is providing the award for the most convincing business idea, worth CHF 10,000. Attendees of the seminar could choose between two challenges from the two largest sectors in social entrepreneurship: health (increasing the use of anti-malarial bed nets) and education (decreasing high rates of teacher absenteeism).

The final pitches to the jury to decide which project would receive the funding took place at Impact Hub in Zurich, with speakers Prof. Michael Hengartner, President of UZH, and Katherine Milligan, Director of the Schwab Foundation for Social Entrepreneurship. The jury members received a business plan for each project to complement the 15-minute pitch. Five out of the six teams chose to find an innovative solution to reduce teacher absenteeism, while one group developed an idea that would provide people in regions with a high incidence of Malaria with donated mosquito nets, brought to them by tourists. All of the projects suggested using platforms – either smartphone or desktop apps – while still acknowledging that social entrepreneurship goes far beyond being a simple app or gadget: it is not about the what, but the how, and that question demands knowledge about the region and institutions chosen as starting locations.

The jury praised the high standard of the ideas, and a tight race was finally decided by awarding the prize money to EDUCAM, a project pitched by Rúben Marquillas and Raphael Metzler. Their business model, which focused on incentives to increase teacher attendance in schools in South America, featured a solid presentation and a simple, low-cost solution for schools to implement. Backed by a study conducted at MIT, “Incentives Work: Getting Teachers to Come to School” by Esther Duflo, Rema Hanna, and Stephen P. Ryan, they designed an application with which schoolchildren can take a photo of their teacher in front of their class every day, upload it to a database, and have the school director check the statistics. Financial incentives – such as salary raises or cuts – for the best and worst attendance percentages would help increase teacher presence and ultimately elevate the profile of the school.

Tips and tricks for a head start from Katherine Milligan

In her keynote speech, Katherine Milligan not only provided valuable insight into what social entrepreneurship truly means, but also urged those following on its path to be aware of the challenges facing them on a personal level: “the nature of the job often involves not only very hard and lonely work, but also a danger of becoming too involved with the personal stories of the locals. Nevertheless, as it became clear, passion for your cause is the key ingredient for achieving a successful and sustainable impact. Pitfalls such as difficult and costly impact measurement studies, which can be both a distraction and a requirement, or too much innovation and too little imitation – causing good ideas not reaching beyond their initial, localized scale – should, however, not be deterrents to the cause. Seizing opportunities such as the one offered by this seminar can equip fresh startups with a wealth of knowledge, a head start in experience and an excellent place to start.

As Prof. Hengartner emphasized, the five teams that were not awarded the prize money should not let this be the end of their idea. As the closeness of the race demonstrated, the potential was there, and resilience was a fundamental asset. He said that the great success of the seminar and the opportunity for students to actively engage in an endeavor that was both practical and business-oriented as well as creative and innovative warranted its continuation in the following years. Prof. Lichand is looking forward to following the further development of all six projects – winning and losing – and also to continuing the seminar. The UZH Teaching Commission agrees, and has just awarded a Teaching Fund to the project, opening further possibilities for expansion and support – perhaps, even, a collaboration between faculties. An inspiring beginning for UZH on a journey that might not always be easy, but absolutely worth it.