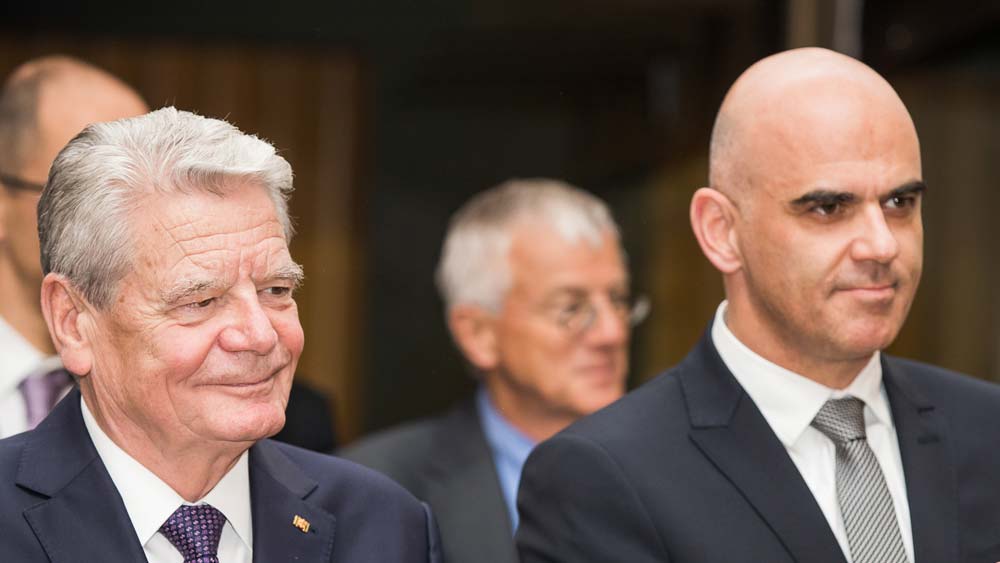 It was “an aesthetic pleasure” to visit UZH, said Joachim Gauck, casting his eyes around the lecture hall. He had spoken in many university buildings, but nowadays few were as impressive as this one.

The former President of Germany also had words of praise for Switzerland’s democratic virtues.  He said the country had something “Ur-European” about it and expressed the hope that Switzerland would one day bring its democratic experience to the EU.

Looked at from a long-term perspective, the EU was a success story, said Gauck. He recalled that Europe had lain in rubble when Churchill, from the main lecture hall of the University of Zurich, called on the people to practice conciliation and urged them to build a united Europe.

Now, for most people in the EU, life was better than ever before. Despite that, many were anxious about the future and feared loss of status, wealth, and their sense of home. Globalization and digitalization were to blame, said Gauck. The rapid changes had split society. While some – mainly the highly educated and professionally mobile – had benefited from the new possibilities and spheres of activity, others felt helplessly excluded from developments.

No end for the nation state

Gauck, in his speech, called for understanding for those seeking protection and orientation in nation states. “The self-critical admission that we – the political class – underestimated the significance of national loyalty and tradition cannot be avoided,” said Gauck. The nation as a point of reference for home and identity in Europe was far from being relinquished.

“There is a non-nationalistic idea of the nation state that is in harmony with the spirit of the European Union,” said Gauck. Democratic, cosmopolitan nation states were the backbone of Europe, guaranteeing the upholding of democracy, rule of law, human rights, and cultural diversity.

Dialogue instead of homogenization

One task of the nation states in a united Europe was to strike a balance between those who build their identities on universalism and openness, and those who are afraid of these principles. Historic and cultural differences should be respected; instead of trying to make everyone the same, more dialogue was needed.

Gauck was also critical of the positioning of Europe in the evolving global political landscape, saying it lacked strategic ideas. But he also called for cautious optimism: “The euphoria of the early unifying phase will not return,” he said, but a new “mature trust” could take its place. European countries had proven their ability to solve their problems together over decades.

Alongside Joachim Gauck, Alain Berset also spoke at this year’s Churchill Symposium. In his speech, he paid tribute to the British wartime Prime Minister, describing him as an unflinching fighter against totalitarianism and as the savior of democracy in its darkest hour. The Federal Councilor described Churchill as “the greatest European statesman of the 20th century.” Of course, he said, the historical situation of the 1930s could not be directly compared to today. But Churchill’s keen ability to sense anything that threatened democracy was once again required, in the face of current populist and authoritative trends.

Populism as an early warning system

Berset said that populism should be seen as “an early warning system.” People’s worries about the loss of home and identity, which were the fuel of populism, had to be taken seriously. However, a difference must be made between legitimate democratic concerns and an attack on democratic institutions. “Citizens must be convinced again that they have a say over their circumstances,” said Berset. The people’s sovereignty, however, should not be made absolute, as democracy was also based on two other pillars: The rule of law and the democratic institutions.

Not all problems had simple solutions, and it took courage to express this clearly, said Berset. Churchill had that courage, which was why he remained an inspiring figure today.

The first Churchill Symposium took place in 1996 on the occasion of the 50th anniversary of Sir Winston Churchill’s speech in Zurich. Since then, the Europe Institute at the University of Zurich, together with the Swiss Institute of International Studies, the British-Swiss Chamber of Commerce (BSCC), and with the support of the Swiss Reinsurance Company Ltd., has organized an annual conference at which high-ranking guests from international politics and business meet to discuss current issues around the theme of European integration.