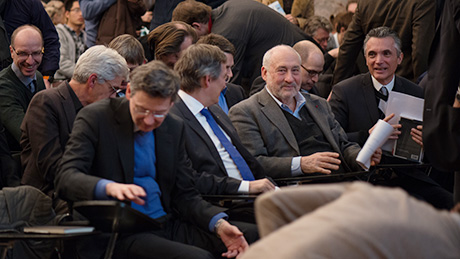 Nobel Laureate Joseph Stiglitz (center) after his address in the main lecture hall at UZH with Marc Chesney, Director of the Department of Banking and Finance at UZH (right), and UZH President Michael Hengartner (left). (Photo: Cedric Zellweger)

Yesterday, Nobel Prize-winning economist Joseph Stiglitz stopped off at the University of Zurich on his way to the World Economic Forum in Davos in response to an invitation from Professor Stefano Battiston at the UZH Department of Banking and Finance. In his talk in the main lecture hall, entitled Financial Complexity and Climate Change, Stiglitz explained how lowering CO2 consumption could influence the global economy.

UZH president Michael Hengartner welcomed the celebrated guest and paid tribute to his achievements, mentioning that Stiglitz held forty honorary doctorates and had published more prolifically, with more citations, than just about any other scholar of his age.

At the beginning of his talk, Stiglitz said that he was regularly invited to the World Economic Forum to bring the requisite diversity to the gathering of the super-rich in Davos. He soon got on to the actual theme of his address, explaining that climate change not only impacts the planet, but the entire financial system. He believes that the global economy is in bad shape, and that in addition to being an environmental imperative, investment in reducing climate change makes sense in economic terms as well. “We’ve only got this one planet,” said Stiglitz. 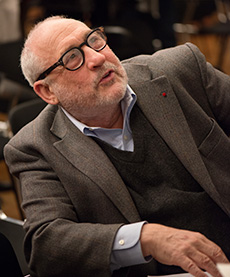 But economics professor Stiglitz did have some good news too. He believes that restructuring the global economy will provide stimulus in the long run, and improve growth and employment. He also sees the emergence of new institutions as an encouraging sign; for example the establishment of the BRICS bank, a development bank set up by the BRICS states (Brazil, Russia, India, China, and South Africa) as an alternative to the existing World Bank and International Monetary Fund, with the primary aim of financing development and infrastructure projects in the BRICS countries.

Analyzing dependencies in the whole network

Die Stiglitz also said that he had great hopes of the resolutions of the Paris climate summit held last December. If the world manages to keep to the two-degree limit it will no longer have to completely exhaust existing oil and gas reserves, he explained. He predicts that this will result in major shifts in the economy. Stiglitz warned that corporations should brace themselves for the collapse of the market for fossil fuels, and said that it still wasn’t clear when and how quickly the market would absorb and correct for this phenomenon. “But it will correct.”

This, in turn, could set off a chain reaction in the financial system. Stiglitz sees the interdependencies among banks and companies operating in the fossil energy industry as a major risk, and believes we have to bring transparency to these networks. This, he says, is a task for the economic sciences, pointing to research by his UZH colleague Stefano Battiston into network effects and interdependencies among financial market participants. Asked by a member of the audience how his ideas could be put into practice, Stiglitz’s response was concise: It’s a question of implementation at the political level.