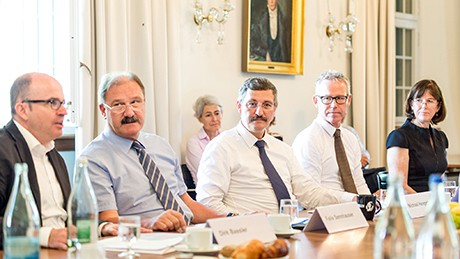 Felix Sennhauser, Medical Director of the University Children’s Hospital Zurich, describes the news as like having all your Christmases at once in the middle of summer. He’s delighted about the new UZH endowed professorship, which will be based at the University Children’s Hospital Zurich. The new chair will be funded by a CHF 20 million endowment provided by the Family Larsson-Rosenquist Foundation with the aim of stimulating research into human breast milk and breast feeding.

At today’s media conference at UZH, University President Michael Hengartner explained that the foundation itself will not have a say in appointing the chair or any influence on future research projects. He emphasized that the terms of the agreement were transparent, with the deed of endowment available for public inspection.

Michael Larsson, President of the Family Larsson-Rosenquist Foundation, said that with so many questions related to breastfeeding and lactation still unanswered, the foundation hoped to close gaps in our knowledge and gather new insights and a greater understanding of the field. Larsson explained that a large portion of the assets accrued by the foundation were now going to fund two professorships for human lactation: One to be set up at UZH, funded by a one-time payment of 20 million francs, and another, with an endowment of 8.2 million Australian dollars, at the University of Western Australia. The foundation chose these two universities because they showed great interest in this research and had a good foundation of knowledge to build on.

Collaboration across the globe

The idea is that UZH and the University of Western Australia will collaborate closely on human lactation research in the future. In Australia the focus will be on the biological, biochemical, and immunological composition of breast milk, while Zurich will concentrate on research into the functioning of mother’s milk, and the lasting influence of breastfeeding on the psycho-emotional and cognitive development of infants and children. So far nothing is known about the impact of mother’s milk on the health and lives of adults. Sennhauser, under whose patronage the future chair will run, said that this generous endowment would now enable the launch of long-term studies. The funding would be sufficient for at least 25 years.

So far, research into human lactation has been rudimentary, with only 300 or so scientists working in the field worldwide. Neonatologist Dirk Bassler, who heads the Department of Neonatology at the University Hospital Zurich, explained that we already know that mother’s milk has a positive impact on infant and newborn mortality and on the health of children and adults – for example in terms of immune protection and the prevention of allergies. Breastfeeding is also healthy for mothers: Women who breastfeed are less prone to postnatal depression, and the risk of breast cancer can be reduced.

But according to Bassler, these insights were only based on observational studies whose findings have to be interpreted with caution. These were often prone to error and not methodologically sound, as they were based on purely descriptive, associative observations. The new professorship would make it possible to conduct prospective cohort studies, enabling a thorough investigation of the effects of human milk on the basis of hard facts.

Hengartner said that the appointment process would start soon, and if all goes as planned a professor could be appointed by mid-2016.