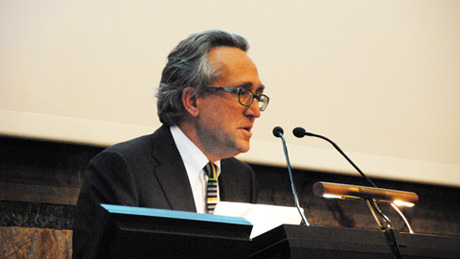 “Every collaboration is a challenge, but also enjoyable and productive,” said Martin Waser in his opening speech at the “Hochschulmedizin Zürich” annual meeting last Friday. The chairman of the board of University Hospital Zurich praised the successful partnership between the University of Zurich, ETH Zurich and the university hospitals, which has prospered within the framework of Hochschulmedizin Zürich. For three years now, the association has supported cross-institutional projects and helped to combine the expertise of the two universities and the hospitals. Such projects benefit from the excellent conditions in Zurich, said Waser. However, he believes that not enough use is being made of this proximity. “We still have much to achieve,” he said, calling on the partners to cross the institutional boundaries even more frequently in future.

Roland Siegwart, Vice President Research and Corporate Relations at ETH Zurich, reviewed the progress of Hochschulmedizin Zürich. Although the official launch was only in 2011, the fruitful partnership actually began much earlier: ETH and the University of Zurich established the first joint institute for medicine back in 1971. The Institute for Biomedical Engineering has since become a global leader in medical imaging technologies, said Siegwart. Hochschulmedizin Zürich started out with a small seed in 2011, which has developed very well over the subsequent years.

The collaboration has given rise to some very promising projects, such as ‘Zurich Heart’, which combines engineering and medical expertise to develop artificial hearts. The project partners set themselves the ambitious goal of developing better heart pumps that can adapt to the activity of the wearer – for instance, by pumping more quickly when climbing stairs than when sitting down – and generally cause fewer complications than current systems.

The latest development in the history of Hochschulmedizin Zürich is an increase in the number of partners, with Zurich’s other four university hospitals joining the association: University Children’s Hospital Zurich, Balgrist University Hospital, the Psychiatric University Hospital Zurich and the Department of Child and Adolescent Psychiatry. This should offer fertile ground for the seed projects, which the organisation is funding with start-up capital amounting to CHF 100,000. Siegwart highlighted the high expectations placed on these projects: they should initiate new collaborations that have an original, inter- and transdisciplinary character, and which have the potential to become the new flagships of the association.

Next on the podium were the initiators of the five seed projects approved by the selection committee. They spoke of ambitious projects, from heart regeneration and the influence of intestinal flora on the immune system, to safer stem cells for applications in regenerative medicine and the search for biomarkers to improve diagnosis of the dangerous heart condition aortic dissection, through to the role of brown adipose tissue in cachexia, the progressive weight loss in cancer patients. The initiator of this last project is ETH professor Christian Wolfrum, whose research into brown adipose tissue has already resulted in important findings in the treatment of obesity. In contrast to white adipose tissue, too much of which causes excess weight, brown fat cells burn energy to generate heat. Together with partners from the university hospitals and the University of Zurich, Wolfrum and his staff are hoping to discover which factors induce and activate adipose tissue. This may protect cancer patients against increasing weakness caused by weight loss.

After guests in the University of Zurich’s auditorium had been given a glimpse into the future of Hochschulmedizin Zürich, Roger Nitsch, Director of the Division of Psychiatry Research at the University of Zurich, presented one of the established projects to have emerged from the partnership between the institutions. “We are getting older in increasingly good health,” said Nitsch. The only exception is dementia, the progression of which can still not be halted by medicine. This could be changed through early recognition, prevention and new treatment strategies. Initial breakthroughs have already been made; for example, in the form of an imaging technology that can detect early signs of dementia 10 to 20 years before the onset of symptoms. This would leave about 15 years in which to take action against the progression of the disease. One very promising tool to do so may be an antibody therapy, which attacks the amyloid plaques that spread in the brains of Alzheimer’s patients and degrade their brain structure.

Foundation for a national programme

Furthermore, Ruedi Aebersold, Professor of Molecular Systems at ETH and the University of Zurich, presented a vision for a national programme of personalised medicine. Hochschulmedizin Zürich has been pursuing the vision of optimised therapies for individual patients since the spring through a new centre of excellence. However, it will take more than just individual research projects and centres to stay internationally at the cutting edge of this field of research. The collection and storage of health data must be centralized in the future to guarantee its security and to ensure access for research purposes. This can be achieved only in a national context, believes Aebersold.

He described vividly how the different projects that have already been conducted throughout Switzerland, from personalised medicine to Big Data, could be combined to prepare the country for the challenges of tailored medicine. “None of the previous programmes in isolation have the necessary depth, scope and financial power to achieve a top international position,” he said. Based on Hochschulmedizin Zürich’s centre of excellence and other interdisciplinary projects such as SystemsX.ch, which will come to an end in 2016, a ‘Systems Health’ national programme could be initiated in 2017. “The time is ripe for such a comprehensive project,” said Aebersold.

Daniel Wyler, Vice President Medicine and Sciences at the University of Zurich, concluded the meeting. “We have made the most out of very little,” he said, highlighting the achievements that Hochschulmedizin Zürich has already made with its initially small steps. He compared the collaboration to cogs that intermesh to pool expertise and achieve more than individual efforts.