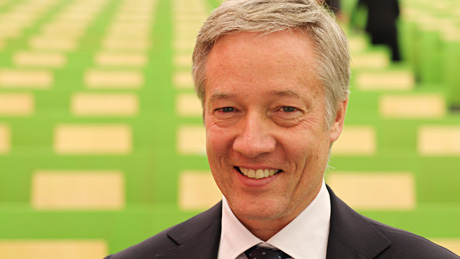 As Vice President for Medicine and Science Christoph Hock would like to help ensure that as many research ideas as possible find their way from UZH labs into practice. (Image: Adrian Ritter)

As Head Physician at the Hospital for Psychogeriatric Medicine, Christoph Hock has been confronted with the effects of Alzheimer’s disease for many years. The disease leads to nerve cell depletion and results in memory loss and ultimately death. The long-drawn-out disease causes great suffering, and places a considerable burden on the person affected and the members of their family caring for them.

In his capacity as a scientist and Co-Director of the Division of Psychiatry Research at UZH, Hock has made important, internationally recognized contributions to Alzheimer’s research. One aspect of Alzheimer’s is the way proteins such as beta-amyloid clump together to form plaques in the brain. Working with the Division of Nuclear Medicine at University Hospital Zurich and radiopharmacy specialists at ETH, Hock has established a procedure in Zurich enabling these plaques to be visualized with the help of positron emission tomography (PET). It’s now possible in principle to identify the disease at an early stage, a key to preventing and treating senile dementia.

Christoph Hock has also collaborated with Roger Nitsch to create the basis for an active agent that could potentially prevent Alzheimer’s disease. The idea is based on the principle of passive immunization. Healthy older people have antibodies against beta-amyloid. The researchers managed to identify these antibodies, analyze their genetic code, and use methods from molecular biology to manufacture comparable antibodies.

To develop this therapeutic idea into a drug, Roger Nitsch and Christoph Hock joined forces with biologist Jan Grimm to found a company called Neurimmune in Schlieren. Since 2011 they have been working with US company Biogen to test the agent on Alzheimer’s patients and clinically develop it.

Instead of making discoveries himself as he has done previously, in the future Hock will be helping other people to express their spirit of discovery. He’s looking forward to working as part of the current UZH leadership team, whose spirit he describes as fresh and optimistic. “This team believes in the possibility of making things happen. I like that.”

As Vice President for Medicine and Science he would like to help ensure that as many research ideas as possible find their way from UZH labs into practice. He sees one of his primary roles as supporting innovation processes.

UZH has already seen a substantial increase in knowledge and technology transfer in recent years. Every ten days on average, the technology transfer organization Unitectra arranges a new agreement with a company for UZH, and every two months on average UZH researchers establish a spin-off firm and commercialize the results of their research. This puts UZH ahead of all other Swiss universities. Despite this, Hock reckons the innovative potential still hasn’t been exhausted: “There’s room for improvement.”

From orderly to hospital director

Christoph Hock’s medical career began in a Munich hospital in 1980. As a conscientious objector he worked as a hospital orderly for a year in lieu of military service. He enjoyed the work, was fascinated by the hospital environment, and wanted to be part of it. So after his alternative service he went on to study medicine at Ludwig-Maximilians-Universität München. He subsequently did research at the Max Planck Institute in Martinsried, worked as a resident at the University of Munich’s psychiatric and neurological clinic, and as a senior physician and research group head at the Psychiatric Hospital of the University of Basel.

In 2001, Hock was appointed Professor of Biological Psychiatry at the University of Zurich. “What made the job so attractive for me was the opportunity of spending around half of my time researching alongside my work as director of the clinic.”

Munich native Christoph Hock quickly found his feet in Zurich. He became a Swiss citizen some time ago. Both his daughters and his son were born in Switzerland.

What he liked about Zurich from the start was the city’s openness and dynamic international atmosphere. He was also impressed by the huge number of first-class academic and scientific institutions, clinics and science-related businesses. “It’s a hotbed of innovation,” he says. The greater Zurich and Basel areas together, for example, represent a major global force in life sciences and medical technology. But Hock believes that the University of Zurich could be making more of its locational potential by intensifying collaboration with the university hospitals, ETH, the universities of applied sciences, researchers in the pharmaceuticals, medtech and biotech industries, and other players in the healthcare segment. As Vice President, Hock wants to foster and build on partnerships of this sort, taking his lead from centers of science and technology such as Boston/Cambridge in the US, Oxford in the UK, and Stockholm. He’s also impressed by the Lake Geneva region’s efforts to create a life sciences and biotech cluster. “These clusters could facilitate the long-term development of the healthcare and life science segment in Switzerland,” he says.

A particular priority of the future Vice President for Medicine and Science will be to nurture the interfaces between the University and the university hospitals. In many areas he believes cooperation is working very well, for example in the development of replacement skin at the burns therapy lab, or the stem-cell based manufacture of heart valves. “But if we want to be long-term players in research into major, complex areas of the future, like diseases of aging, cancer, infectious diseases and genetic therapy, the University, ETH and university hospitals will have to coordinate their efforts on a much broader basis than they have until now,” opines Hock. He sees the establishment three years ago of Hochschulmedizin Zürich (“Zurich University Medicine”) as a step in the right direction. The organization was set up to coordinate cooperation in biomedicine and medical technology between UZH, ETH, and the university hospitals.

Revitalizing the role of researching clinician

But inspiring the spirit of discovery among researchers requires more than just good networks. There have to be attractive career prospects for young researchers. Hock criticizes recent developments in this respect, especially in medicine, where he believes that the training of specialists has been so heavily regulated that little room remains for research. He also criticizes the way cost pressure on hospitals has limited the scope for research even more, pointing out that it has become very difficult for young medical professionals to combine research and clinical practice. “This means there are fewer and fewer clinicians who also do research, even though people who combine both roles are absolutely vital in terms of research and innovation because they can act as an interface between the academic and clinical worlds.”

So what can be done to prevent the extinction of the researching clinician? Hock has a list of things that can help, from protected time and job rotation through scholarships and grants.

Striking the balance between basic and applied research

Another key word for Christoph Hock is interdisciplinary research. “If you want to be innovative these days there’s virtually no way around cross-disciplinary collaboration.”

From the outset, the Division of Psychiatry Research at UZH that Hock set up with Roger Nitsch and has headed so far has gathered researchers from different disciplines under one roof. Clinical physicians work side by side with biochemists and molecular biologists. And yet the different areas are sometimes worlds apart in terms of culture. “In my research, I as a physician always think of the potential benefit to the patient. My colleagues in basic research have a different mentality: They’re much more inclined to seek knowledge for its own sake.” The future Vice President stresses that these two approaches “aren’t mutually exclusive. They’re two equally justified and complementary points of view that should both have their place at the University.” It’s a matter of maintaining a balance between basic research, which is mostly driven from the bottom up, and promoting large projects devoted to specific themes and applications.

He sees the diversity of basic research as one of the most striking features of UZH and a strength that should be actively fostered – especially when the aim is also to push forward collaborative projects addressed practical responses to the major health issues of our time. “Applied research builds on basic research,” says Hock, “drawing on it for the know-how, ideas, tools, and knowledge it needs.”

null Christoph Hock nullChristoph Hock is 53, and married with three children. Since 2001 he has lived in Erlenbach near Zurich. His findings on specific antibodies against amyloid plaques published in Nature Medicine in 2002, and work published in Neuron in 2003 on the possible influence of antibodies on the course of senile dementia, have had a major impact on the entire field of research, stimulating development of immune therapies to treat Alzheimer’s.null