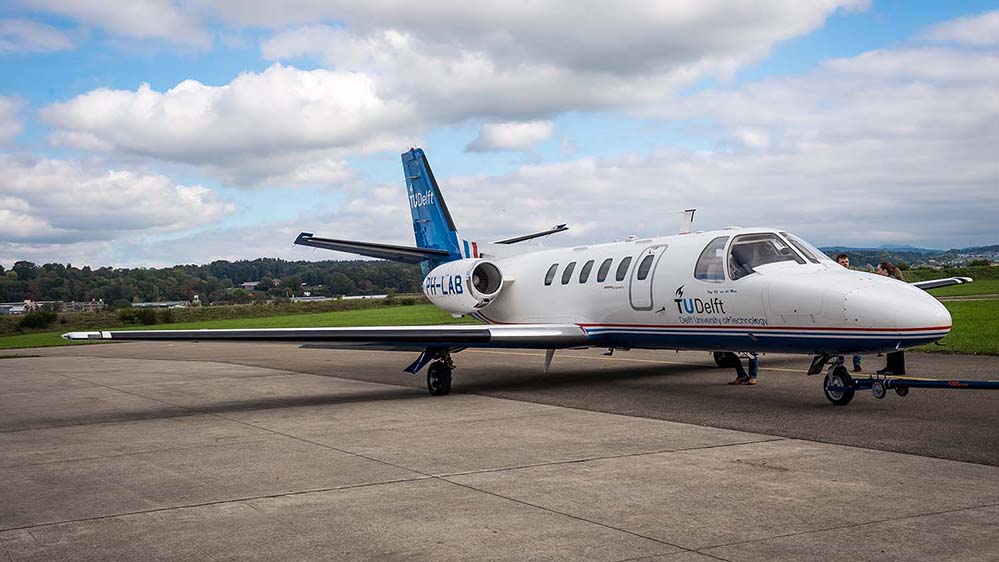 The UZH Space Hub and the Swiss Sky Lab have been carrying out parabolic flight campaigns since 2015. The weightlessness achieved during these flights enables researchers to test technology and applications that might later be used in satellites or on the International Space Station (ISS). Researchers can also conduct experiments on new production methods, processes and scientific questions in zero gravity – and all this can be done without ever having to leave the Earth’s atmosphere. To date, 30 research projects have benefited from the weightlessness produced by the Swiss Parabolic Flights. Parabolic flights provide scientists with a cost-effective, low-threshold way of testing their research approaches and innovative technologies in weightlessness at an early stage of development.

The 6th Swiss Parabolic Flight Campaign includes tests for the Akademische Raumfahrt Initiative Schweiz (ARIS) to develop a nanosatellite, an experiment involving autonomous drones for future Mars missions, an experiment on human tissue production in weightlessness, and a basic research experiment to study the “genomic code” of gravity.

Unlike in previous campaigns, the latest campaign will use a Cessna Citation II research aircraft. The small jet, which can carry up to eight investigators and their equipment and is operated by the Royal Netherlands Aerospace Centre (NLR), will complement the larger Airbus A310 ZERO-G. “Through the NLR and its research aircraft, we want to offer highly flexible, cost-effective and quick access to microgravity. It’s the first time that the researchers can determine the parabolas and flight profile themselves. This makes weightlessness highly accessible, almost like using regular equipment in a lab,” explains Oliver Ullrich, UZH space medicine expert and director of the UZH Space Hub. The high flexibility of the NLR also significantly reduces the usual lead times. “We can now conduct experiments with only a few weeks’ notice.”

Oliver Ullrich isn’t the only one who believes in the Swiss Parabolic Flights’ potential to create added value and boost Switzerland’s standing as a hub for research and technology in space. The Swiss Air Force and the Federal Council consider scientific parabolic flights to be in the public interest. On 31 August 2021, the Swiss federal government, the canton of Zurich and the local municipalities signed a joint synthesis report for the transformation of the airfield area in Dübendorf, which lists parabolic flights as one of the key research platforms of the airfield’s use.

Founded in 2018, the UZH Space Hub – the space and aviation cluster of the UZH Innovation Hub – ranks among the world’s most significant space hubs. Its mission is to bring together and support students, researchers, businesses and start-ups. The UZH Space Hub’s network at the Dübendorf airfield and at UZH currently consists of 36 Top-class research groups and multiple cooperating institutions in Switzerland and abroad. Its innovation topics include earth observation/remote sensing, biotechnology/space medicine, biodiversity and the environment, astrophysics, supercomputing, autonomous flying and green aviation.

The “genomic code” of gravity

The research team recently discovered that the whole cell reacts to weightlessness. The cell as a whole is a sensor that mechanically transfers gravitational forces to the nucleus, which changes the position of certain genes and brings about specific patterns in gene expression. The human cells’ response to changes in gravity therefore appear to be encoded in the spatial structure of our genes, as a kind of three-dimensional code. This experiment uses various high-throughput molecular methods to study the chain of reactions on which this gravity-related cellular regulation is based. Studies in altered gravity provide insights into how cells perceive and process mechanical forces. This can help improve our understanding of disease processes in which mechanical forces play a role, including those affecting the musculoskeletal system and the structure and organization of tissue formation as well as the biology of stem cells and tumors. Mechanomedicine, i.e. the field of medicine based on mechanobiology, is emerging as a new branch of medicine. Research conducted in altered gravity can play a significant role in developing the basic principles of its medical opportunities.

Future Mars missions will extensively rely on autonomous and human-piloted drones to explore the red planet’s underground caves in search of habitable environments. Previous research indicates that microgravity can affect astronauts’ motion perception. This could potentially impair the decision-making ability of human drone pilots. To better understand how gravity affects self-motion estimation in drone pilots, this experiment combines virtual reality and psychophysics during three parabolic flight phases: normogravity, hypergravity and microgravity. The researchers will analyze the behavior, heart rate and flight performances of a human subject using a drone flight simulator. Their results will provide the foundation for developing assistive technology for drone flight in future space missions.

There has been evidence for a few years now that the microgravity conditions to which astronauts and human cells and tissue are exposed (in vivo and in vitro, respectively) can shift the balance in the normal and abnormal behavior of organs, a process that is comparable to symptoms of ageing. To decipher the biological mechanisms involved in this process, this project aims to use in vitro “avatars” (i.e. organoids) that mimic the multicellular organization and basic functions of human organs and diseases. The experiments will be conducted using a novel cell culture plate, developed by the researchers themselves, which enables them to produce, develop and analyze thousands of organoids in microgravity.

SAGE is a nanosatellite project that aims to study the creation of an artificial milli-gravity and microgravity environment, which is found on small moons and asteroids. Using their three-component CubeSat, the researchers want to generate a spin to make the satellite act as a centrifuge. The experiment involves a biological payload to study the response of eukaryotic cells to cytotoxic and cytostatic drugs in milli-gravity, as well as a UHF to S-band transponder that will benefit the amateur radio community. The parabolic flights enable the researchers to study the technical feasibility of the CubeSat’s control system and its artificial gravity levels, as well as antenna deployment and the pumping mechanism for the biological experiment. The team will also verify the suitability of the cancer cell lines selected for the actual experiment.