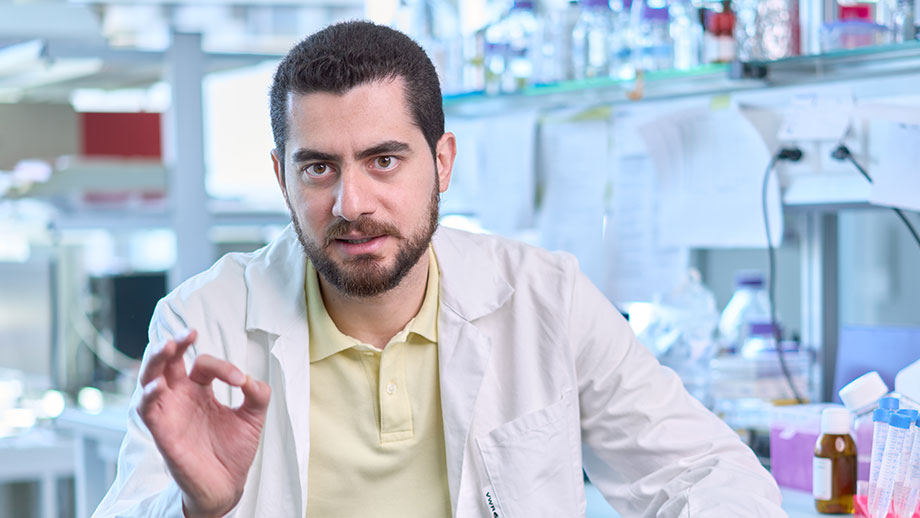 Since ancient times, humans have been searching for the fountain of youth – a spring that has the power to rejuvenate. “We’re closer to that dream than ever before,” says Soheil Saeedi from the UZH Center for Molecular Cardiology. In collaboration with ETH Zurich and Harvard University, he is researching an anti-aging strategy for blood vessels. Some 17.9 million people worldwide die from cardiovascular diseases every year. The majority of these deaths are the result of age-related vascular diseases such as atherosclerosis, where a dysfunction of the endothelium – the innermost layer of cells that line the interior surface of blood vessels – causes deposits called plaque to build up that narrow the vessel and can lead to heart attacks. “The problem is that the human endothelium is unable to effectively regenerate itself – particularly in old age,” explains Saeedi. The Iranian national has therefore launched an ambitious research project which aims to find a source of intact endothelial cells: he wants to transform fat cells back into stem cells and use them to culture immature endothelial cells to repair the damaged vessels.  If the project is successful, five grams of fat tissue from a patient would in future be enough to rejuvenate their blood vessels.

Turning back the clock

The method of reprogramming mature somatic cells such as fat cells to become induced pluripotent stem cells (iPSC) was developed by Japanese researcher Shin’ya Yamanaka in 2006. Pluripotence describes the capacity of a stem cell to self-renew and differentiate into any type of cell, such as a muscle or skin cell. This specialization or differentiation involves some of the cell’s genes being switched on or off by molecules attached to its DNA – known as epigenetic marks. Yamanaka discovered four genes – the Yamanaka factors – that code proteins and work like a molecular eraser by removing the epigenetic marks on cells. When this happens, the cell transforms back into an unspecialized stem cell, turning back the biological clock, so to speak. Yamanaka’s “eraser” works in principle, but Saeedi, who earned his PhD in pharmacology, says a lot more investment is needed to better understand and improve this complex process.

Stopping the development of cancer

The revolutionary discovery has its drawbacks, however, as one of the rejuvenating Yamanaka factors is also one of the most powerful cancer-causing genes known to biologists. The properties of stem cells for self-renewal and rapid proliferation are also characteristic of tumor cells. Striving for eternal youth thus has its risks. “Tumor formation is the greatest obstacle that we have to overcome to harness this type of stem cell therapy for humans,” says Saeedi. Research teams all over the world are currently trying to optimize the method of reprogramming cells while inhibiting the development of cancer.

Saeedi brought a potential tool to improve cell reprogramming using Yamanaka factors from his former workplace, the Harvard Medical School. That tool is an enzyme called D-amino acid oxidase (DAAO). This “chemogenetic tool”, as Saeedi calls it, is packed in a virus and can be implanted into a selected organelle of the cell, where the enzyme works as an on and off switch for cell transformation. “If we add the amino acid D-alanine, the enzyme converts it into hydrogen peroxide. This triggers the reprogramming and increases the yield of stem cells,” the scientist explains.

In the final stage of the rejuvenation process, he adds the amino acid D-cysteine, which processes the enzyme into hydrogen sulphide. “Hydrogen sulphide is a small molecule that in biology is considered a fountain of youth,” he says, with a smile. The method works and after a year of research, Saeedi was able to successfully generate pluripotent stem cells from white fat tissue in mice. Research is currently looking at their risk of developing tumors.

He is now preparing the next step in the two-stage process, namely inducing the pluripotent stem cells to specialize into functioning endothelial cells. This biological process is called redifferentiation. “For this we need a cleverly devised cocktail of growth factors and chemicals as well as the chemogenetic tool to control the process,” explains Saeedi. This is the first time that the chemogenetic tool D-amino acid oxidase (DAAO) has been used for a form of therapy. The advantage of this type of personalized therapy using induced stem cells is that the recipient can also be the donor. “Five grams of fat are taken from the patient, from which immature endothelial cells are cultured and then transplanted back into the same person,” the scientist explains.

Which fat tissue is best suited to this is one of the questions that Saeedi’s research intends to answer. He is also going to test three different ways of delivering the new endothelial cells to the damaged vessel wall: injecting the immature cells into the mouse’s bloodstream or directly into the affected site. The third option he is going to study is whether the chances of recovery improve if the cells are surgically transplanted. Saeedi believes that injecting the cells would be the easiest option for the future treatment of humans.

The scientist’s ambitious project has received backing from the UZH Research Talent Development Fund (FAN) and the Gebauer Stiftung. “As a researcher, it’s heart-warming when your project gets funding. It shows that people like your idea, see what you’re doing and support you,” says the promising young talent, who is driven by his passion for science. Being seen is particularly important for up-and-coming researchers. “Positions for junior researchers are highly sought after. Being awarded funding for your research by foundations such as the FAN is therefore a great opportunity.” Ultimately, Saeedi has found just what he dreamt of after his postdoc: greater freedom in his own research.

The UZH Alumni Research Talent Development Fund (Fonds zur Förderung des akademischen Nachwuchses, FAN) provides targeted funding for brilliant junior researchers. In 24 years, the FAN has supported some 200 researchers with a total of CHF 13 million. The FAN therefore gives UZH a competitive edge in attracting the smartest minds from all over the world and works with the university to invest in the research of tomorrow.

Japanese researcher Shin’ya Yamanaka won the Nobel Prize in 2012 for the discovery of Yamanaka factors:  four genes that can erase the epigenetic marks of a cell. The cell – in Yamanaka’s case a skin cell – then transforms back into an induced pluripotent stem cell (iPSC) which can develop into any cell type. Yamanaka’s discovery brought about a revival in stem cell research as it meant that stem cells could be extracted from any somatic cells without having to sacrifice embryos, which involves major ethical issues. Another advantage of this new source of stem cells is that the recipient of stem cell therapy can also be the donor, which means there is no risk of the transplant being rejected.

iPSC has diverse medical applications, but the specialist field still has many obstacles to overcome, because an overdose of the elixir of life has serious side effects, tipping cells into uncontrolled growth and tumor formation.