(jpg, 537 kB) Healthy lung tissue contains many air-filled alveoli, in which oxygen is absorbed from the respiratory air into the blood (left). In fibrotic lung tissue, these have been displaced by connective tissue growths (right). (Image: Christian Stockmann, UZH) 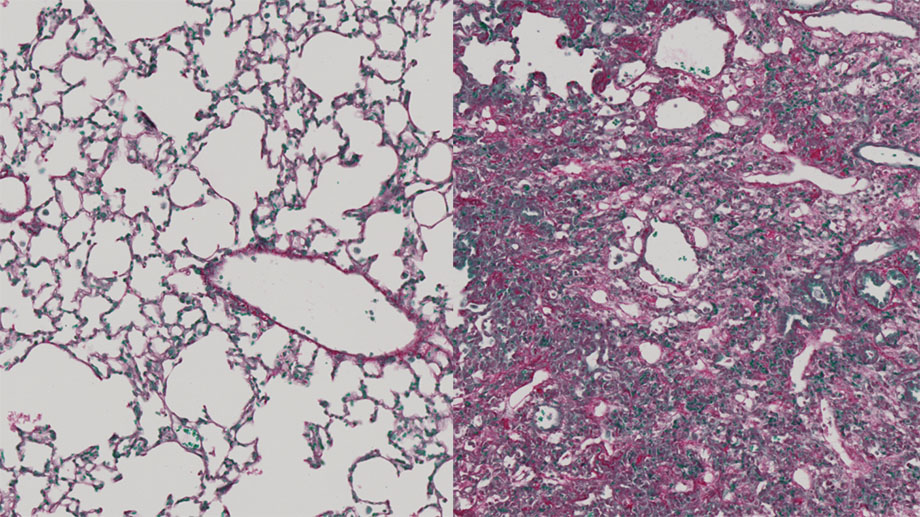 Healthy (left) and fibrotic lung tissue (right)
Healthy lung tissue contains many air-filled alveoli, in which oxygen is absorbed from the respiratory air into the blood (left). In fibrotic lung tissue, these have been displaced by connective tissue growths (right). (Image: Christian Stockmann, UZH)

Fibrosis is a pathological proliferation of connective tissue that destroys the organ tissue. It is the ultimate consequence of almost every kind of chronic damage. Fibrosis can occur in almost every type of tissue in the body, although the liver, lungs, heart and kidneys are most often affected. Fibrosis is responsible for up to 45 percent of all mortality in industrialized countries. Inflammation or vascular disorders often cause chronic organ damage. They activate the fibroblasts, which then begin to proliferate uncontrollably and create deposits of fibrous tissue. This scars the organ tissue, destroying it little by little. The functioning of the affected organ worsens noticeably until it fails completely.

An international research team led by the University of Zurich (UZH) has now developed a new strategy to eliminate fibroblasts in a targeted manner. “In animals, we were able to trigger an immune response similar to that to a vaccination, in which the activated connective tissue cells were destroyed while the resting fibroblasts were left unharmed,” explains study leader Professor Christian Stockmann of the Institute of Anatomy at the University of Zurich. In this manner, researchers were able to reduce fibrosis in vital organs such as liver and lungs while at the same time leaving healthy tissue unharmed.

This is where previous strategies for fibrosis treatment had previously failed, since they also damaged resting fibroblasts. Resting fibroblasts are important, however, for maintaining the structure and functioning of healthy tissue. Researchers therefore studied the differences between the surfaces of resting and of activated connective tissue cells. “Our computer-assisted analyses revealed that fragments of two surface proteins – Adam12 and Gli1 – which can be detected by the immune system, are present in large numbers on activated fibroblasts, while there are very few on the resting cells,” explains Stockmann. The activity of these two protein genes is stimulated by chronic tissue damage, which means the activated fibroblasts produce the said proteins in larger quantities.

The researchers then used these two surface structures as a vaccine in mice in order to trigger an immune response via cytotoxic T-cells. These immune cells normally eliminate virus-infected or cancerous cells. “With the newly developed immunotherapy, we were able to eliminate fibroblasts efficiently in mice, thus reducing fibrosis in the liver and the lungs, without affecting healthy organ tissue,” says Stockmann. If scientists manage to successfully trigger a comparable, targeted immune response in humans, then vaccine-based immunotherapy could be used in future for the treatment of patients with organ fibrosis.