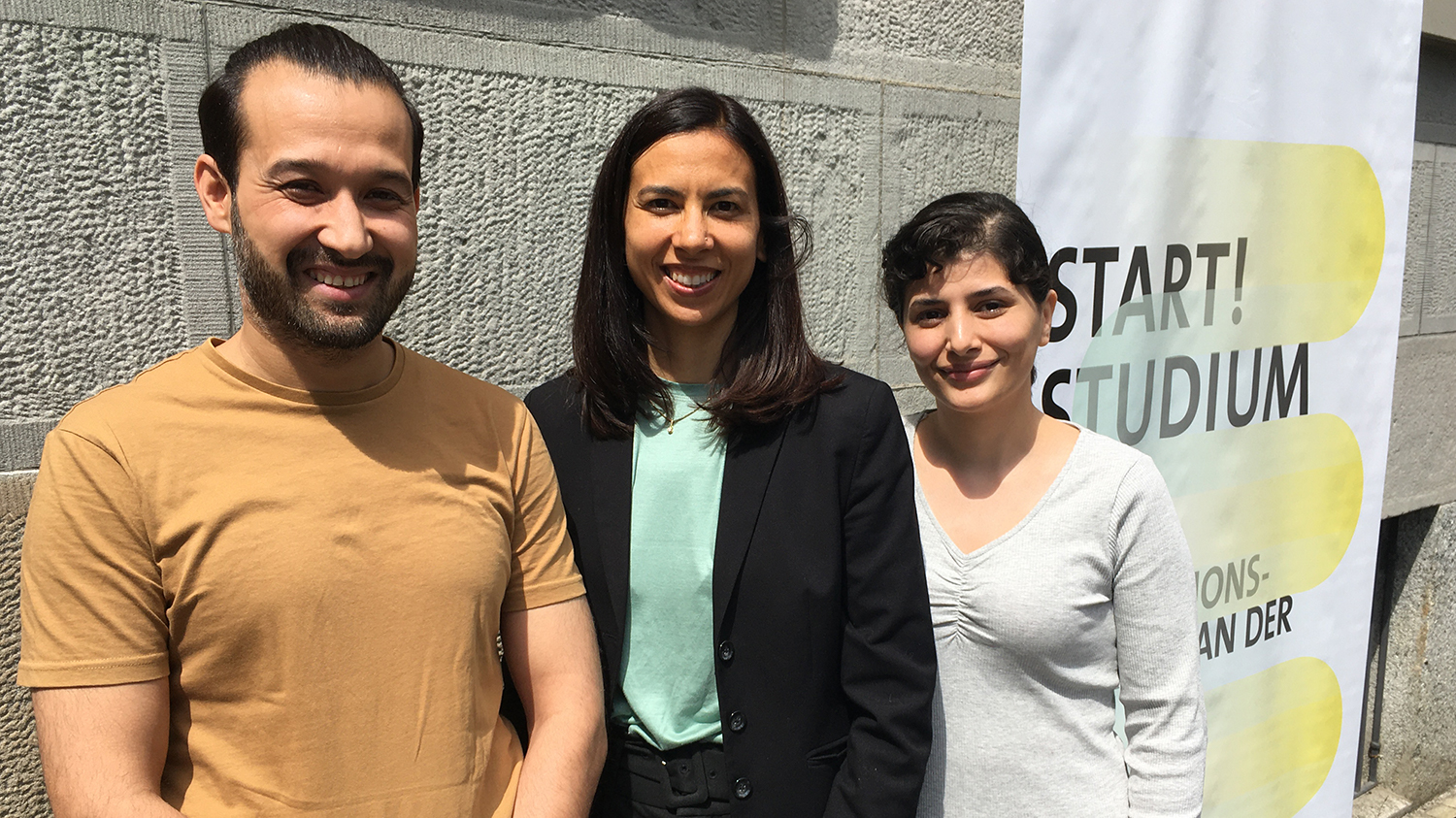 The past two semesters at UZH were like a golden opportunity, says Jawid Hashemi. The 37-year-old Afghan is one of 40 participants to recently complete the first ever START! Study – University Integration Program at UZH. Aimed at refugees in Switzerland who have higher qualifications, the program prepares them for studying and working in Switzerland. “We want to provide people in difficult circumstances with better chances of accessing higher education,” says project coordinator Sara Elmer from UZH’s Global Affairs, who oversees the program. The program was developed in close cooperation with the Integration Office of the Canton of Zurich, the State Secretariat for Migration and various offices at UZH.

The first class of graduates came from 10 different countries, with just over half from Turkey, along with refugees from Syria, Russia, Venezuela, Iran and Afghanistan, including Jawid Hashemi. The program enabled them to improve their German and English skills at the university’s Language Center, find out about the Swiss education system and sit in on lectures to get a taste of university life.

Jawid Hashemi, for example, enrolled in lectures about Swiss politics and law as well as on colonialism, nationalism and globalization in Asia and the Middle East. This allowed him to build on his previous academic experience. Hashemi studied law and political science in Afghanistan and political science and international security in Kyrgyzstan, and he later taught counterterrorism at the Kabul Military Training Center. Two and a half years ago, when it became clear that the Taliban would seize power in his home country, he was forced to flee.

“When I first arrived in Switzerland, I felt as if I were blind,” says the Afghan, looking back.  He felt alone, had no future prospects and was unfamiliar with the local work customs and higher education system. Maryam Nafei, who studied mechanical engineering and biosystems technology before leaving her home country Iran, had a very similar experience. “When I first came to Switzerland, I was very isolated and insecure. I was facing an uncertain future and didn’t even know what the next month would look like,” recalls the 25-year-old. One day, an acquaintance of hers told her about the UZH program. She immediately registered and was accepted. “I could have cried I was so happy,” says Maryam Nafei. Having completed two semesters of university integration at UZH, she now sees a clear future for herself. She has applied for admission to mechanical engineering degree programs at the Zurich University of Applied Sciences and ETH Zurich, and is currently preparing for the entrance exams.

In addition to language and IT courses and academic lectures, the UZH program also includes consultations and info events with external organizations such as the Career Information Center. “In addition to learning about academic culture and the Swiss education system, the program also provides participants with professional orientation,” says Sara Elmer. This is a key part of the program, since it brings together people come from countries with very different educational systems.

Reconciling the participants’ varying academic backgrounds and expectations with the requirements of studying at a Swiss university is thus one of the key challenges in designing the program, explains Sara Elmer. In some countries, for example, accounting is a subject that can be studied at university, whereas in Switzerland it is usually taught as part of a commercial apprenticeship. This is one of the reasons why not all of the participants in the course will ultimately go on to study at a higher education institution. “And yet, one of the graduates has already found a job in a marketing company, where she can continue her previous career,” says Sara Elmer. “So for her, the program has also been successful.”

Meanwhile, the social activities and contacts with UZH students made possible thanks to the program are just as important as the transfer of knowledge. These are the things that can help refugees overcome the feeling of powerlessness and isolation that many experience in Switzerland. For example, students involved in the University of Zurich Student Association offer German tutoring sessions. “These interactions with students were very important for me,” says Jawid Hashemi. “I not only improved my German, but also learned a lot about Switzerland and became more self-confident.” He would like to go on to study international and comparative law at UZH and is currently applying for admission. His goal is to one day work for an international human rights organization. But he could also see himself applying for admission to the bar and becoming a lawyer working on behalf of refugees in Switzerland. “At the moment, I’m still busy trying to figure things out for myself, but I’d like to give something back to society in the future,” says the Afghan.

It’s still too early to tell what the future holds in store for the first 40 graduates of the START! Study program. “We’ll soon know who gets admitted to a university,” says Sara Elmer. But whether the students will go on to complete their studies and have successful careers won’t be known for quite some time. Only then will the decision be made whether or not to continue the university integration program. For now, two further university integration programs have already been approved as part of a pilot project until 2024.

The START! Study – University Integration Program is a two-semester educational program at UZH for refugees with the potential for pursuing higher education. The program prepares participants for the demands of studying in Switzerland: they receive support in improving language and organizational skills as well as their academic expertise. The START! Study program thus offers refugees the support that matches their potential and the chance to become long-lasting participants in the Swiss labor market.

The START! Study participants improve their German and English language skills; develop their academic expertise in selected university modules; strengthen their skills in mathematics, IT and academic work methods; gain an insight into the demands of studying in Switzerland; learn about higher education opportunities in Switzerland and take part in social activities and meet with other students.

The program was developed in close cooperation with various offices at UZH and is managed by Sara Elmer from Global Affairs. The START! Study team was awarded the 2021 Team Effort Award for the exemplary and committed way in which the various offices and the University of Zurich Student Association (VSUZH) worked together.