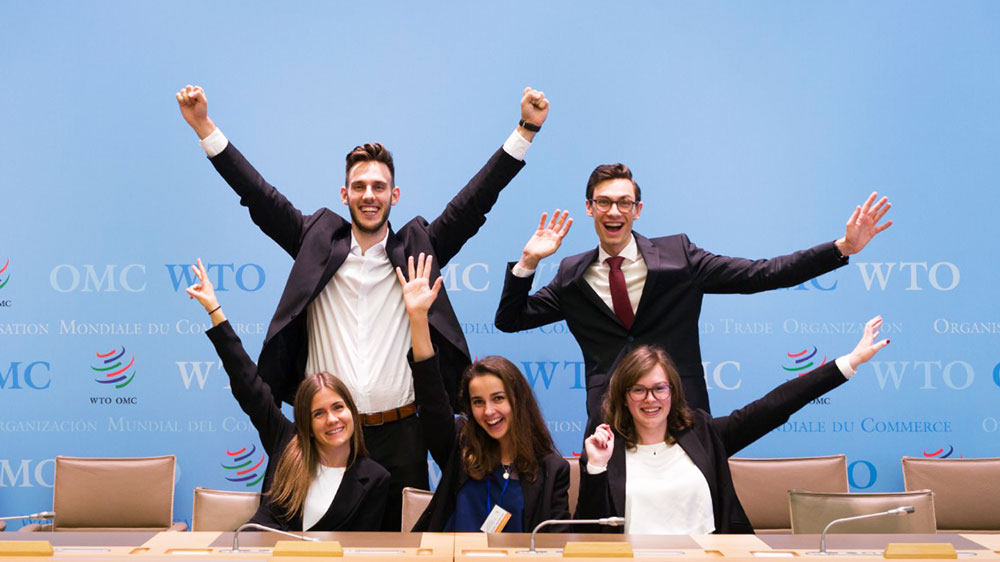 Perhaps you’ve watched those legal dramas on TV and imagined yourself as one of a hotshot team of glamorous lawyers staying up all night to prepare a difficult case, dazzling the court with your brilliant arguments and then celebrating your unexpected but decisive victory with champagne in a rooftop bar? For four students from the University of Zurich’s Faculty of Law, it was not to remain just an idle daydream. At the beginning of this month, the hopeful quartet traveled to the WTO headquarters in Geneva to represent a fictitious case before a public audience and a seven-member panel of experts presided over by WTO Deputy Director-General Angela Ellard. They won their case with flying colors.

Prior to presenting their closing arguments in Geneva, the students Giulia Bachmann, Mattia Brugger, Kayla-Leigh Coetzee and Robert Matic had already won the regional European elimination round of the WTO Moot Court. In total, 71 teams from universities around the world took part in the competition. The teams of (maximum four) students have to prepare fictitious cases which are presented before WTO panels in simulated legal proceedings. They draft written submissions and present their arguments in person to experts in international trade law. The students need to be able to understand the facts and the arguments of both states in the dispute, draft statements for both and represent both the complainant and the respondent.

The case involved a highly complex legal dispute relating to windmills. The construction of windmills requires rare earth elements, the mining of which has negative ecological and health-related consequences. In the fictitious case, one state was subsidizing this mining, which led to a competitive advantage over another state – precisely the kind of dispute that could also be brought before a WTO panel in real life.

The four students spent two semesters intensively preparing the case. “They had to develop a deep understanding of the intricacies of trade law but also of the technical requirements relating to renewable energies and the extraction of rare earth elements,” explains PhD candidate Laia Roxane Guardiola, who coached the UZH team at the chair of international economic law at the Faculty of Law and had previously participated in the WTO Moot Court herself. There was also time pressure on the team to meet the strict deadlines for each of the preliminary rounds.

The students did not know each other before and were put in a group together following a very competitive selection process at the Faculty of Law. Nevertheless, they quickly formed an excellent and mutually supportive working relationship. “You could tell in the run-up and during the pleadings that everyone was pulling in the same direction. The four of them performed impressively both individually and as a team and were able to respond competently to tricky questions and concerns from the experts,” says Guardiola.

Victory thanks to team effort

It was probably this team effort that helped carry them to victory, both in the European preliminary round and in the global final round against 23 other top-notch teams. Matthias Oesch, Professor of public law, European law and international economic law, is proud of the UZH team’s performance: “It’s a great success. I am thrilled that our students can compete so well on the international stage. It doesn’t get better than that!”

This victory in the final global round is positive for the reputation of the university and a great career boost for the four students – as well as an ideal opportunity to expand their own networks. They have made friends for life, all four say. In addition, the prize comes with a scholarship to Georgetown University in Washington DC. Who knows, perhaps the fab four will in future really be living the lives of those hotshot lawyers described in our opening fantasy.