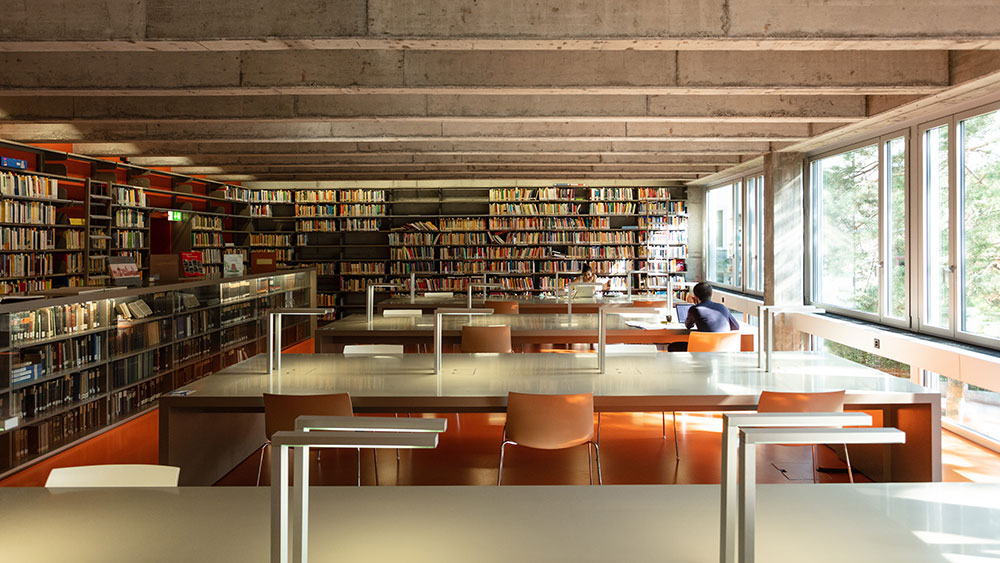 From the earliest advanced cultures to the present, libraries have been a fixture in our intellectual and cultural lives. Throughout their 5,000 years of existence, libraries have been tasked with collecting, storing and providing physical objects in physical spaces. But the digital revolution has now fundamentally changed the setting in which libraries operate. The future of knowledge is no longer based on print, but on data that are processed by software, stored in clouds and shared on platforms. This begs the question: If the world’s knowledge is readily available on the internet, why do we still need libraries?

For centuries, a well-curated and comprehensive collection of books and manuscripts was considered a status symbol – for example among educated Romans and book-loving aristocrats, for the Medici family as well as German poets, in the Vatican and in monasteries. The well-known phrase “knowledge is power” has always been reflected in the grand architecture of libraries – take, for example, the Abbey Library of St. Gallen with its elaborately pompous rococo hall, or the many splendid national libraries that developed across Europe and the US in the 19th century. In the past, having an exceptional library was also a means for elite universities to attract researchers and students. Hunching over books in Harvard Library’s distinguished reading room meant you were at the very heart of academic discourse.

At the end of the 20th century, however, things started to change. Information was now no longer tied to the physical medium of books or printed journals, but was instead increasingly shared through digital means. The internet made it possible for users to access data anytime, anywhere. Knowledge transfer was no longer directly dependent on time-honored institutions, with several new actors emerging in the virtual space and getting involved in the dissemination of information and provision of knowledge. The mission statement of Google, probably one of the most influential players in the information business, states that their mission is “to organize the world’s information and make it universally accessible and useful.” The same could also be said of traditional libraries.

The digital revolution in media and communications has prompted some to proclaim the end of the Gutenberg era. That’s not exactly how Rudolf Mumenthaler, who has been serving as director of the University Library Zurich since January of this year, would put it. And yet, the library science and management specialist does believe that digitalization has led to a paradigm shift, a fundamental change in the world of libraries not unlike the one brought about by Gutenberg's printing press.

From the mid-14th century, the use of movable metal types turned the conventional method of book production – i.e. handwritten manuscripts – upside down and led to a genuine media revolution in Europe. Production and publication of books grew exponentially, and libraries were swept up in this new dynamic. The sudden spread of book knowledge and information prompted a steady increase in literacy and reading skills. While in the post-Gutenberg era books and scripts were the currency of libraries, in the 21st century it is data and digital publications. 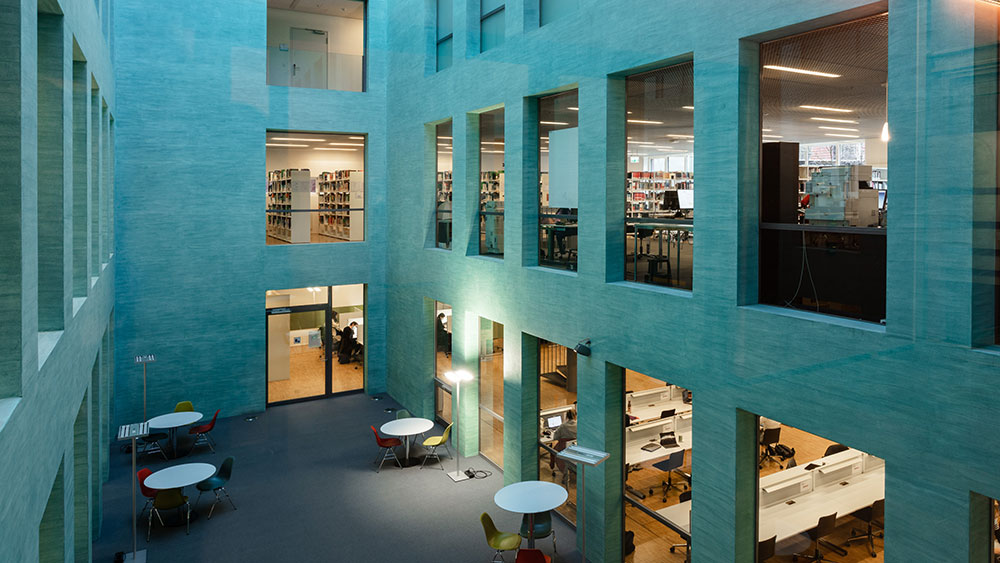 “Throughout history, libraries have had to change again and again to survive,” says Rudolf Mumenthaler. They have had to adjust to modern political and socio-economic processes and adapt to social and technological progress. “In this respect, libraries can be seen as robust institutions that have learned from various crises, and which have become accustomed to challenging and reinventing themselves as well as their core mission.” Mumenthaler cites the various historical waves of democracy as examples for these periodic surges in innovation. These waves also engulfed the respective education systems and led to the creation of public libraries in the USA and UK as well as public reading rooms in libraries across German-speaking countries. Thomas Jefferson, one of the founding fathers of the USA, is often credited with introducing the concept of free lending libraries. But even such a pioneer would probably struggle to comprehend that it is now possible for 20 or 30 million people to access libraries digitally at the same and read books for free.

At the turn of this century, libraries were facing a fundamental identity crisis, torn between the analogue world of books and the digital era of algorithms. Today, it seems natural for libraries to operate in the digital space and hold their own in a post-print culture of knowledge. Libraries have responded to the pressures of digitalization and prepared for new tasks and functions.

The initiative for developing digital university libraries came from researchers (especially the well-connected global community of physicists) and was picked up by information providers – such as academic publishers, professional associations and also libraries – that were increasingly starting to provide their services electronically. “Libraries started taking advantage of new technological opportunities early,” says Rudolf Mumenthaler. They digitalized their catalogs, licensed digital content, provided new research options, digitalized text, visual and audio data, and made them available through the internet. Today they rank among the protagonists of the electronic era. The former keepers of the world’s knowledge have transformed into gatekeepers that use licenses, portals and cooperations to provide their users with access to data and information from across the globe.

Making knowledge and scientific data available to everyone has remained one of the core tasks of libraries – despite, or maybe thanks to, internet capabilities. And this task can take on many forms, such as literacy programs for children or workshops for students seeking to improve their digital skills, licenses for e-journals and databases or, more recently, support for universities’ open access policies and the provision of primary scientific data and research records.

This last aspect in particular is becoming more and more important for university libraries. Often the data collected for a research project are stored by the relevant researchers themselves and then all but disappear behind the published studies. A promising area has opened up for libraries here, which can take charge of setting up, processing, managing and archiving the scientific data. What’s more, if libraries turn into hubs for new information and knowledge management systems and through their services start supporting researchers in their data-driven projects, the libraries themselves become a part of the research process. Research will then no longer just be conducted in, but with libraries.

A new project group (DSI Community Libraries) led by Rudolf Mumenthaler at the University Library has been established to sharpen the profile of libraries as infrastructure and service providers for researchers operating in digitally transformed universities. “Libraries are more important than ever before,” believes the historian. In times of Wikipedia, Google and fake news – not to mention exponential growth in data and information, making it increasingly difficult to prioritize – curating external content is becoming more and more valuable. “Take the current Covid discourse, for example. As independent institutions, libraries can help orient the public and improve the quality of debate by spreading relevant knowledge that has been verified.”

The value of information literacy and data literacy services as one of the core services provided by the library of the future is also relevant for researchers and instructors, believes Mumenthaler. Based on digital research infrastructures with national and international ties, libraries will start providing scholars and students with bespoke services and solutions. “It’s in the nature and tradition of libraries to evolve along the needs of society and individual library users,” Mumenthaler states. In the 21st century, however, these users are no longer merely “gentle readers”, but savvy clients used to picking out the most attractive goods and services in the free information market.

The libraries’ shift toward service-oriented knowledge hubs is also evident in their architecture. The image of libraries as places that store physical media, with shelves and shelves of books, is slowly but surely fading. The future of knowledge lies first and foremost in clouds and on servers, not structures made of concrete and glass. “In the past, the focus of libraries was on the people, and library halls provided a space for encounters, integration, learning and discovery – and this aspect has now been picked up again,” explains Mumenthaler. In the Age of Enlightenment, libraries were popular sites for people to congregate and discuss the latest scientific findings. Even the Great Library of Alexandria was a kind of knowledge marketplace that enabled students and interested people to interact and exchange information.

Reading and studying with others

In this regard, the future of libraries is rooted deeply in its rich history. This becomes clear not least when considering some of the spectacular, technologically innovative new library buildings that are emerging all over the globe, from Aarhus to Zurich. These structures are more reminiscent of the glorious temples of knowledge of the distant past than the practical civic buildings of the last 50 or 60 years. The interior of modern-day libraries is no longer designed around the previous core functions of a library – book stacks, checkout desks and research stations – but rather a diverse range of work and study spaces, including makerspaces where users can work on their creative projects. In the past two pandemic years, one of the key things Rudolf Mumenthaler observed was a significant increase in the need for multifunctional library spaces – such as areas designed for group work and virtual meetings, or acoustically separated, individual workspaces.

So do we still need libraries despite having search engines, websites and virtual worlds at our fingertips? “Yes!” is Rudolf Mumenthaler’s resounding answer. “Libraries remain important public and social spaces even in our globalized and digitalized knowledge society.” A real-life meeting place between work, university and our homes where we can read, study and communicate with others. And an institution that is uniquely capable of linking the past with the future.

The new University Library Zurich opened its doors at the beginning of 2022. The institution, headed up by Rudolf Mumenthaler, brings together all department and institute libraries under one organizational roof. Moreover, cooperation with the Zentralbibliothek Zürich (ZB) has been stepped up, including the introduction of free courier services between the University Library and ZB. Additional services, e.g. expanded offers for library users and joint liaison services for departments/institutes and faculties are currently being developed.

Last Fall Semester, UZH and ZB celebrated the founding of the new University Library by staging a series of events under the topic Books, Data, Spaces – University Libraries in the 21st Century. The events explored key trends and developments from the world of university libraries, including the role of libraries as a link between research and society, the library design of the future, and changing reading habits. The 80-minute talks and discussions are available online (in German).