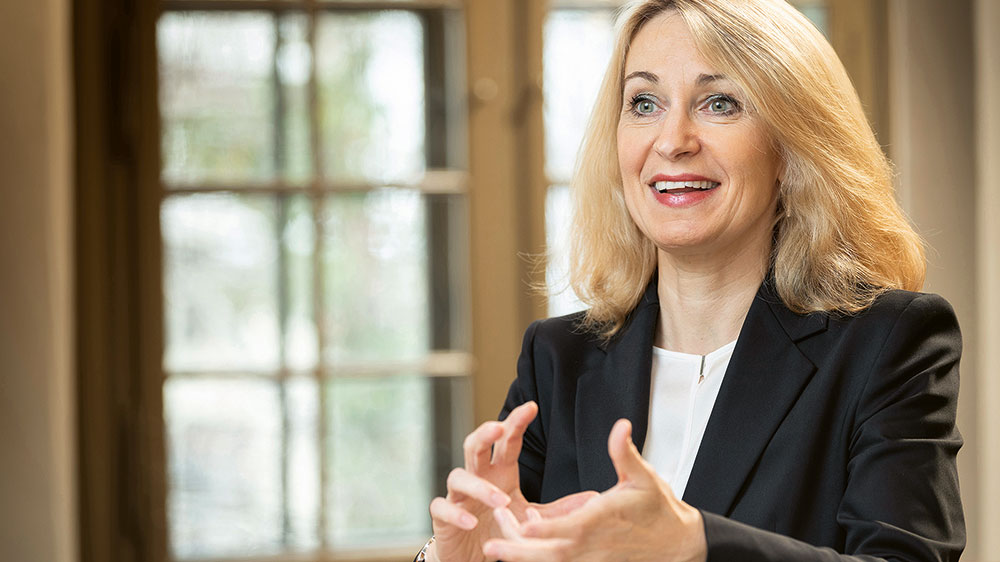 Elisabeth Stark, you’re a linguist and as Vice President Research oversee the area of academic career development at UZH, among other things. What do you think makes a career in academia appealing?

Elisabeth Stark: In the right circumstances, a higher education institution such as UZH allows you to work very independently, even early in your career – and often in an area or field that you yourself have chosen. Well supervised PhD candidates are given many liberties, and this can be incredibly motivating and fulfilling.

Is this something that you experienced in your own career?

Stark: Yes, I was in a very privileged position even as a junior researcher. My thesis supervisor offered me an assistant position. At the time, this role came with a relatively high teaching load, and it could also mean having to help out at the professorial chair by carrying books around and copying handouts. But that wasn’t the case for me.

Stark: I did have to hold seminars, but my thesis supervisor carried out many tasks himself and sometimes even wrote meeting minutes himself. And he had assistants who were able to take on many of the day-to-day tasks. That’s how he was able to give his PhD candidates so many liberties.

Is that the ideal situation – a professor who affords their junior staff great academic freedom?

Stark: Absolutely, but not in a laissez-faire sort of way. Team integration and continuous dialogue with others are crucial for scientific work. Carrying out tasks for their professors isn’t the only thing assistants should be doing. Junior researchers shouldn’t be exploited – after all, the main goal of any teaching and research assistant position is acquiring academic qualifications. Of course, PhD candidates often collect data and in this way help professors write their papers. But assistants must also be allowed to develop their skills. That’s why we have to provide junior researchers with clear employment terms that set apart enough time for them to conduct research.

How do you view the current situation of PhD candidates and assistants at UZH?

Stark: The conditions for doctoral candidates and assistants at UZH are very attractive, but sometimes there’s an issue with implementation. This needs to change. That’s why we’re currently developing a new quality assurance tool, among other things. Our plan is to establish an anonymous monitoring system by the end of the year that will enable us to survey the job satisfaction of our PhD candidates, just like in the teaching evaluations. Such a tool could then also be used at the level of postdocs. The goal is to pave the way for academic careers in the best possible way and make adjustments where necessary.

Regarding the supervision of junior researchers, I’d also like to mention the Graduate Campus’ new mentoring award, which is presented annually to professors who do an excellent job supporting and guiding their researchers.

Universities are competing for the best junior researchers nationally and internationally. What would it mean for UZH if Swiss universities could no longer take part in European funding programs such as Horizon Europe?

Stark: The issue here isn’t so much at the level of junior academics. PhD candidates don’t really care where the money for their position comes from. But it gets difficult when appointing professors, for example to tenure-track assistant professor roles that are aimed at excellent young researchers. This is a highly competitive field, and nobody is interested in positions where they can’t apply for funding from the EU. If we can’t rejoin the EU’s Horizon Europe program as quickly as possible, all Swiss universities will enter a downward spiral. It’s a huge problem. What’s more, we’re also no longer a part of Erasmus plus, the EU’s program for Master’s level students and PhD candidates. This also makes Switzerland less attractive for junior researchers. If we’re not a part of this, we may end up disappearing from their mental map. The stakes are incredibly high, and I’m very concerned.

Which career paths would you like to make available to young researchers at UZH in the future?

Stark: One of our goals going forward is to create a wider range of career paths. Traditionally, academic careers still go from a PhD to postdoctoral work to a professorship. But there aren’t that many positions available at the highest level. The situation has improved slightly in the past few decades, but funding for new professorships is still very limited. And while many young researchers and scholars want to work in academia, they don’t necessarily want to be professors.

These are the researchers you’d like to provide with new career paths?

Stark: Exactly, experts working in science or data management or in libraries are crucial. We need to support them. That’s why it’s important that we expand and strengthen the so-called third space, which links the academic and professional spheres.

So you’re saying that not all academic careers have to culminate in a professorship, but may increasingly lead into the third space – is it time to rethink our understanding of what an academic career is?

Stark: At least to some extent, yes – it’s also important here that careers in the third space aren’t perceived as inferior, but simply as a different kind of career. Besides strengthening the third space, we also have to create more permanent positions below the level of professors. We need teaching staff with permanent positions who can focus on teaching and are less involved in research – similar to the role of lecturers in the English-speaking world. It doesn’t make sense to create a new professorship for every increase in student numbers.

And the same goes for researchers. If a new field opens up that requires a great deal of research support, e.g. in infrastructure, and we have someone outstanding with a PhD in this area, we initially also need a permanent scientist. At the moment, we too often try to solve capacity issues by creating new professorships, and in doing so ignore the associated brain drain. Recently, a young postdoc who left UZH to start a permanent research job in a start-up told me that he wasn’t interested in landing a professorship, since this meant he would no longer have any time to conduct research.

What about full professorships as a career goal?

Stark: Full professorships will continue to play a major role. But we need to do more to manage expectations in the future. We have to tell junior scholars much more clearly that a full professorship involves research management first and foremost. Full professors generally don’t analyze data themselves, and they’re no longer as involved in the research process as before. This has to be clear. Perhaps this job profile then doesn’t correspond to the junior researchers’ career goals. But I’d like to mention another aspect when it comes to managing expectations.

Stark: It’s not unusual for junior researchers to be ambitious in their careers, but also already struggle to earn their PhD. And even if they weren’t really happy during this phase, many often stay at the university and then continue to struggle as they work toward obtaining their habilitation. To avoid this, we have to take more responsibility when selecting and communicating with researchers. We have to be able to tell PhD candidates after one year, “I don’t think it’s going to work out. You’re in your mid-20s and have many skills, but conducting scientific research isn’t the right path for you.” I would like us to be more honest with our young scholars in the future. Our selection processes should be stricter, but at the same time respectful.

Supervisors must then also develop the relevant skills. What is UZH doing in this area?

Stark: The graduate schools and the Graduate Campus are very active here. According to UZH’s new Governance 2020+ guidelines, quality assurance in the supervision of junior researchers is part of the deans’ portfolio of tasks. They are asked to discuss questions to do with supervising researchers in their progress meetings with colleagues, and also make sure that the individual outline of rights and responsibilities is in line with the general rights and responsibilities, and above all that they’re complied with.

But UZH isn’t a business. I don’t think professors need a background in management, nor do they need to be trained in how to supervise junior researchers. They could possibly do with some more humility and empathy, in the sense that they should keep examining and re-examining how they work with junior researchers. Research is a very diverse field, as are researchers. Supervising a brilliant, on-the-autism-spectrum scientist or an excellent extrovert allrounder requires very different approaches, and a supervisor has to be able to handle both to promote each researcher in the best possible way. These are two entirely different personalities that require individual supervision. I don’t think you can teach this fundamental skill in a course.

This is an abridged version. The original version appeared in the 2021 Annual Report.