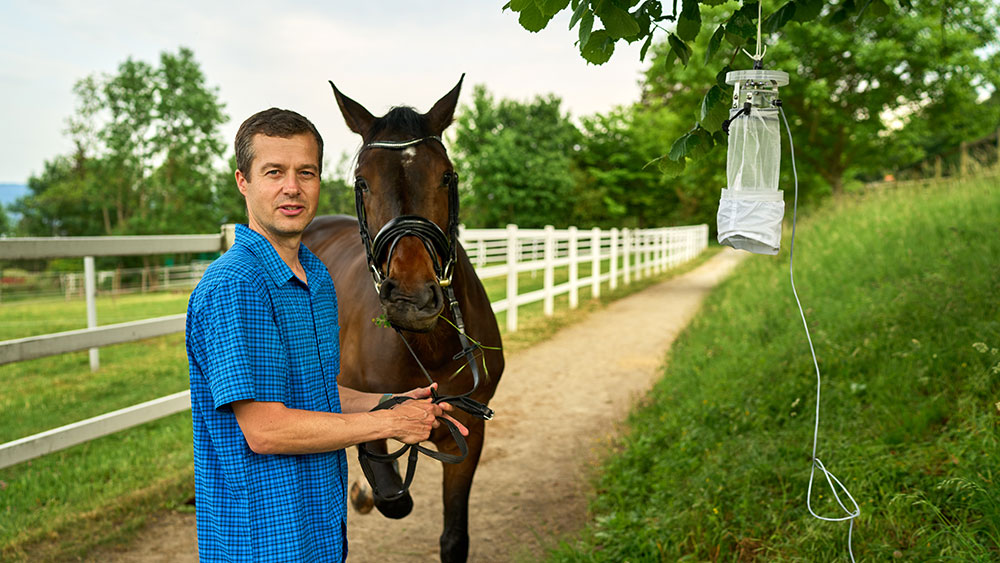 Mosquitoes, the unwelcome guests at every summer party. But in many places, they are more than a disturbing annoyance: hundreds of thousands of people die each year from parasites and viruses transmitted mainly by mosquitoes, and hundreds of millions more suffer serious consequences of infections. They pose a danger not only to humans, but also to animals. In Switzerland, tiny biting midges – only one or two millimeters in size – are particularly harmful to sheep, cattle and horses. These small mosquitoes are responsible for the spread of bluetongue virus in central Europe over the last 15 years.

The disease affecting sheep, cattle and goats causes high fever and inflammation and in the worst case leads to death. It often causes the animal’s mouth and tongue to turn a bluish color, hence the name. If the affected animal is pregnant, her offspring will be stillborn or malformed. The Schmallenberg virus, discovered in Germany in 2011, quickly spread to Switzerland and causes symptoms similar to the bluetongue virus in sheep and cattle. In horses, midge bites can also cause very itchy skin rashes, called summer eczema.

Until now, there was little that could be done to protect the animals from such diseases. Mass vaccination against bluetongue virus temporarily eliminated it in Switzerland, but it has begun spreading among livestock again. “Giving regular booster vaccines to hundreds of sheep is time-consuming and costly,” says Niels Verhulst, entomologist at the Institute of Parasitology at UZH and research leader of the vector entomology group. “Many farmers only vaccinate if they are likely to face large economic losses from the disease.” For the Schmallenberg virus, meanwhile, there is no available treatment and no vaccines have been approved in Switzerland.

This leaves measures that directly target the pests: topical insecticides are most commonly used today; they act through direct contact with the mosquitoes and are also used against ticks. In principle, they are very effective, says Verhulst, but often their full potential effect is not reached or is only reached for a short time. The problem is that the insecticide really needs to be applied everywhere the animal could be bitten – not an easy task. In addition, the treatment has to be regularly repeated, especially if the animals lick it off or sweat.

Another possibility would be to target the insects at their breeding sites: unlike mosquitoes, biting midges do not lay their eggs in water, but prefer cow dung or muddy places. “The conditions at animal drinking troughs on farms are therefore just about ideal for reproduction,” explains the Dutch scientist. Keeping such sites clean helps to contain the disease transmission, however in day-to-day agricultural work it can only be done to a limited extent.

New approaches are therefore needed, and Verhulst now plans to investigate one in particular. He is harnessing a strategy that is also used to protect humans: repellents that work at a distance, such as anti-mosquito candles or insect plugs. “Such repellents could also improve protection against biting midges for sheep or horses.”

As part of a research project supported by a FAN award for junior researchers at the University of Zurich, Verhulst and his team are looking into various questions. Which substances are most suitable for repelling biting midges? What is the effective range of the repellents, and how long do they last? What concentration gives the best results without harming the environment and other living creatures? How should the substance be released in the first place, and what role does temperature play? Common active ingredients such as transfluthrin need to be heated to make them volatile and spread through the air.

But a scented candle in a barn is not a very smart idea, and one rarely finds plug sockets in fields. Verhulst instead uses impregnated jute strips that gradually release the respective substance – in addition to the synthetic insecticides transfluthrin and methofluthrin, he will also test the natural aroma nootkatone (see box). Initial experiments elsewhere with jute strips placed under roof gables showed promising results: mosquitoes stayed several meters away, and the effect lasted for months.

Light instead of blood

Once he has found which active ingredient looks most promising, Verhulst wants to test it in natural situations, such as barns and fields. No sheep or horses would be present at this stage, clarifies Verhulst, as obtaining a permit from the cantonal animal experimentation commission is a lengthy and expensive process.

Instead, he will use LED traps. The biting midges will be released on one side of a large cage and caught with the LED traps on the other, with the repellents in between. Of course, the attraction of a light source is not the same as a real host animal, admits Verhulst. Nevertheless, the experiment will show whether the presence of certain active substances in the air will divert the biting midges from their path. In addition, Verhulst points out that biting midges, like common mosquitoes, feed on nectar rather than blood. “Only female mosquitoes need blood, in order to grow and lay their eggs.”

But simply scaring away the biting midges does not solve the whole problem. “If we keep insects away from one location, we have to trap them in another,” says Verhulst. Thus, when looking into what repels mosquitoes, it is therefore also necessary to ask what attracts them. “Otherwise they’ll just move on to another victim.”

In ancient times, according to the historian Herodotus, Egyptian fishermen wrapped their fishing nets around their beds at night to keep mosquitoes away.  And they knew insects were averse to certain plants. Humans have been warding off pesky insects with natural extracts and essential oils for thousands of years. Citronella, lavender, eucalyptus, cedar or lemongrass – the old remedies are just as effective today and can still be found in scented candles and other mosquito repellents.

Herbal repellents are in fact a valuable alternative to the common synthetic insecticides, to which mosquitoes are increasingly developing resistance. As part of his FAN project, Niels Verhulst is investigating both the repellent effect of the synthetic insecticides transfluthrin and metofluthrin against biting midges, and the plant-based nootkatone, an aromatic substance that gives grapefruits their characteristic smell and taste. “In initial pilot studies with common mosquitoes, we were able to achieve promising results,” says Verhulst. Natural repellents often work just as well as synthetic pyrethroids. Another advantage is that they do not remain on the skin or in the soil and are therefore better tolerated by the environment, humans and animals. Synthetic active ingredients such as permethrin can be toxic to fish and bees. However, the volatility of plant-based repellents is a problem: the repellent effect often wears off after a very short time.

The FAN fund, largely financed by UZH Alumni, provides targeted support for exceptional young researchers. In the last 24 years, FAN has supported over 190 researchers with around 13 million Swiss francs. The FAN fund helps UZH to attract the best talent from around the world and represents an investment in the future of science and academia.