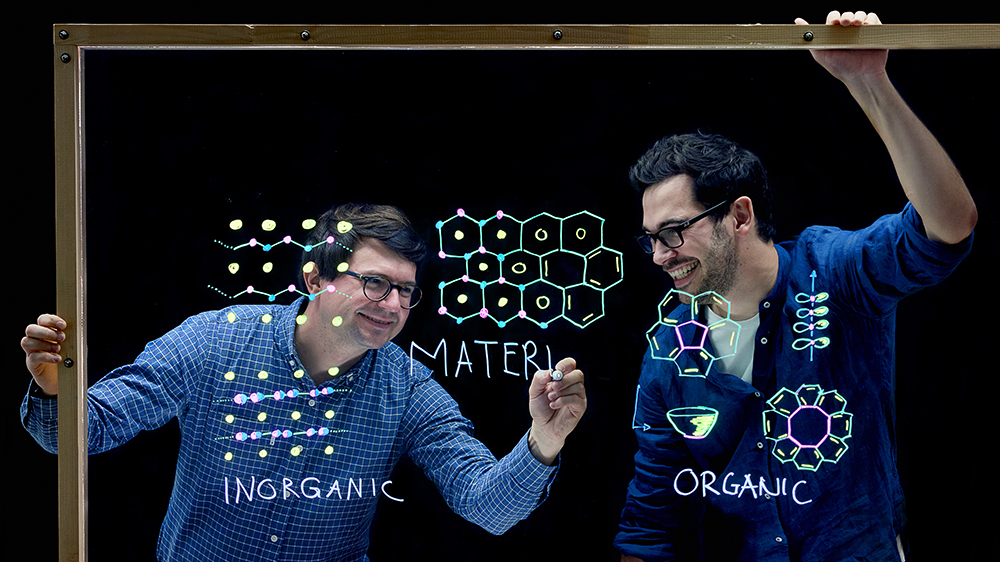 It’s a simple research question, but one that's tricky to answer: How do you go about finding completely new materials? For example superconductors, substances that can conduct electricity with no losses whatsoever. Or in earlier days, perhaps, glass, a solid material that’s completely transparent − a property that before the invention of glass 2,000 years ago might well have been attributed to magic. Michel Rickhaus and Fabian von Rohr are both on the lookout for novel materials of this sort. They don’t see themselves as magicians at all, but they do admit to enjoying a little bit tinkering. Each of them and their teams are taking an entirely different path in search of a substance that behaves quite differently than what you would expect from “normal” materials. Von Rohr’s research group is working at high temperatures to fabricate “emergent” quantum materials and new materials with so-called non-trivial topological electronic states. Behind these mysterious sounding names might lie the future of electronics. Michel Rickhaus’s group in turn specializes in making “intelligent” wires that respond to their surroundings and heal themselves, and which can even be put together and dismantled on command. It sure sounds a bit like magic.

Both researchers have received a substantial grant from the University of Zurich Research Talent Development Fund (FAN; see box) for their innovative approaches. They haven’t yet collaborated, but each follows the other’s research with interest. Rickhaus sees a certain amount of serendipity in von Rohr’s work. By that he means an openness to chance findings, a willingness to look left and right while you’re foraging. To an extent, von Rohr agrees with his colleague. In their lab, his group make materials under extreme physical states to force compounds of chemical elements into unfamiliar arrangements.

While von Rohr gives chance a chance, Rickhaus sees himself as more of an artist, a sculptor. “We find out what sort of properties a chemical structure has by actually creating it.” A certain willingness to experiment can do no harm here either. As Rickhaus explains, you only find new materials if you look for them. “It might sound trivial, but finding them means manufacturing them – without always knowing exactly what will emerge in the process.” Having a good idea isn’t enough. “You then need to synthesize and characterize the substance in question.”

If you’re lucky, what comes out of this process can be groundbreaking and urgently required in fields of application such as electronics. It's assumed that the silicon age will soon be over as conventional chips reach their physical limits (see box below). What follows is already emerging in research labs – the post-silicon age. Among other things, it will involve new types of quantum materials. The properties of these materials are dominated by macroscopic quantum effects “that arise on the basis of emergent collective interactions between electrons,” as von Rohr puts it. In other words, an entire material suddenly pulls off quantum mechanical magic tricks. Materials of this sort could potentially be used in completely novel electronic applications. They could serve as fundamental components in so-called spintronics, valleytronics and topotronics. These new forms of electronics not only use the charges of particles to process information, but also additional quantum mechanical properties, for example their topology. The topological nature of electronic states is a key concept that in recent years has led to a real revolution in the way quantum materials are understood. Von Rohr and his ambitious group of researchers are trying to find out exactly what properties materials must have to best facilitate these non-classical, “non-trivial” electronic states.

“Our day-to-day research in the lab could hardly be more different,” says Fabian von Rohr of Michel Rickhaus’s work, even though there might be overlaps in terms of application. But where this application might lie is something that people doing fundamental research don’t yet know for sure. You could imagine these new materials as undiscovered islands: “From a distance, we sense that there’s an island out there on the horizon, but we first have to go there to explore it.” And for his research approach at least, von Rohr admits that “it could actually happen that we chance upon a whole continent.”

Michel Rickhaus has fewer expectations that his research will lead to the discovery of a new continent. With a background in organic chemistry, he’s used to building compounds from the ground up. Unlike those working in the currently dominant polymer chemistry, which involves working with huge, firmly chained molecules, his group endeavors to build materials on a gradual basis. Developing a design like this from scratch is hard work – making sure even only 20 atoms hang together precisely is a herculean task. Rickhaus had the brilliant idea of working with small molecular components and repeating these tiny units thousands or even billions of times, stacking them, lining them up and allowing them to grow into larger structures – such as wires. “In classic organic chemistry, the form of the molecule itself isn’t so important,” says Rickhaus. “But we have an architectural approach that works systematically with the shapes of molecules.” Seen from this perspective, a wire is nothing other than a miniature tower. The only thing is, “if you want to construct a tower you can simply layer flat disks one on top of the other. But a tower built this way will be wobbly, because it’s much too easy for the individual elements to shift in relation to one another.” If, instead of this, you use saddle-shaped molecules, you can create something like a stack of Pringles that’s much more stable. Rickhaus’s goal is for a small molecule which doesn’t have any interesting material properties of its own to become something bigger that at some point develops a property such as conductivity. And then for it to be used or incorporated as a material in a specific application. Their research is about moving from pure research into the real world.

This has a great side-effect. As these small building blocks aren’t covalently connected, it’s also fairly easy to manipulate the “building”, as it were. With the right chemical or physical prod, it collapses back into its individual molecules. Or you can change the ambient conditions to activate “self-healing” abilities, and the molecules rearrange themselves in line with their macro structure. Unlike von Rohr, who sometimes simply lets things happen and looks to see what comes out of it, Rickhaus tries to define as many parameters as possible in advance. “We code the spatial arrangement within the individual building blocks.” Of course, not everything can be planned here either. For example, it might be that “you want to let a straight stack grow and suddenly end up with a ring,” explains the chemist.

Surprises like this can trigger new ideas. Rickhaus believes a materials scientist has to have a playful side, simply because a purely rational approach wouldn’t work. Von Rohr concurs; it’s very important to experiment with an open mind. At that point the question of an application is still a long way off. Maybe one in a hundred ideas will turn out to be viable. This perhaps shows most clearly what distinguishes a successful young researcher above all – persistence.

The Research Talent Development Fund (FAN) supports brilliant young researchers at UZH. Backed by UZH alumni, the fund helps innovative junior researchers to hone their research profile with grants designed to enable them to build a reliable foundation for an academic career. FAN has been in existence for 22 years. Over this time it has provided more than CHF 11 million in funding to 171 researchers. www.fan4talents.uzh.ch

Moore’s law goes back to a prediction made by Intel co-founder Gordon Moore in 1965. According to the law, the complexity of integrated circuits doubles on a regular basis – although the precise frequency isn’t clearly defined, with some people saying one year and others two. So far this prediction of exponential growth in the development of chips has held fairly well. But soon it will all be over, at least with conventional methods. In a few years’ time, silicon-based electronics on a 2 to 3 nanometer scale will have arrived. At these dimensions, quantum mechanical effects become clearly perceptible, for example with charges simply “tunneling” from one conductor to another. In the event that Moore’s law is actually “disproved” at that point, a successor is already in the starting blocks. According to Huang’s law, the performance of AI-specific computer chips will likewise double every two years, regardless of the technical arrangement.