Where do parliamentarians see a need for action in the area of digitalization? UZH News asked policymakers who took part in the Parldigi Masterclass at the Federal Palace in Bern. (Video: Brigitte Blöchlinger)

In Commission Room 3 of the Federal Palace, terms such as “artificial intelligence”, “spambots”, “deep neural networks” and “data sovereignty” are flying around. Florent Thouvenin, professor of information and communications law, director of the Center for Information Technology, Society, and Law (ITSL) and member of the board of directors of the Digital Society Initiative (DSI) at UZH is presenting the DSI Strategy Lab’s position paper on a legal framework for artificial intelligence. His attentive listeners are the members of the parliamentary group “Parldigi” – members of the National Council and the Council of States who are particularly interested in digitalization topics.

This is the fourth time that the group has met to exchange ideas with scientists from UZH and other universities. The meeting at the beginning of the winter session marks the end of the four-part masterclass, in which 18 parliamentarians from across the party spectrum have participated this year, 11 of them regularly. The topics presented and discussed included artificial intelligence, the internet of the future and cybersecurity.

“Many colleagues want to learn more and delve into these topics,” says Edith Graf-Litscher, SP national councilor from the canton of Thurgau and co-president of the Parldigi group. She had the initial idea for the masterclass and is pleased with the response it has received from her colleagues. She particularly values the contacts between politics and science. “We were able to strengthen our connections with the speakers,” she says. This will make it easier for the politicians to approach the researchers in the future when questions arise about the various topics.

The discussion at the masterclass showed that politicians are very interested in receiving scientifically sound information on current challenges. Questions are asked such as: Is it even possible for Switzerland to determine for itself how data is handled? How should and can we take into account the international framework? Does it make sense to take legal action against artificial intelligence discrimination?

Thouvenin, a legal expert, also appreciates the opportunity to contribute findings from his research to the political debate. He sees a need for action particularly in the legal response to the challenges posed by artificial intelligence. “Switzerland should become active here and work out its own solutions,” he tells the politicians. As in other areas, the EU is leading the way here with a proposal. However, Thouvenin thinks simply adopting the EU approach would not be expedient, because it has substantive weaknesses and does not fit into the Swiss legal system.

Abraham Bernstein, professor of informatics and executive director of the DSI, is pleased with how the Parldigi Masterclass went: “Politicians appreciate receiving information and assessments from experts that are based on a scientific foundation.” The DSI has set itself the goal of introducing scientific findings into society, the economy and politics and encouraging dialogue about them. “The masterclass is a valuable opportunity to open up that dialogue.” 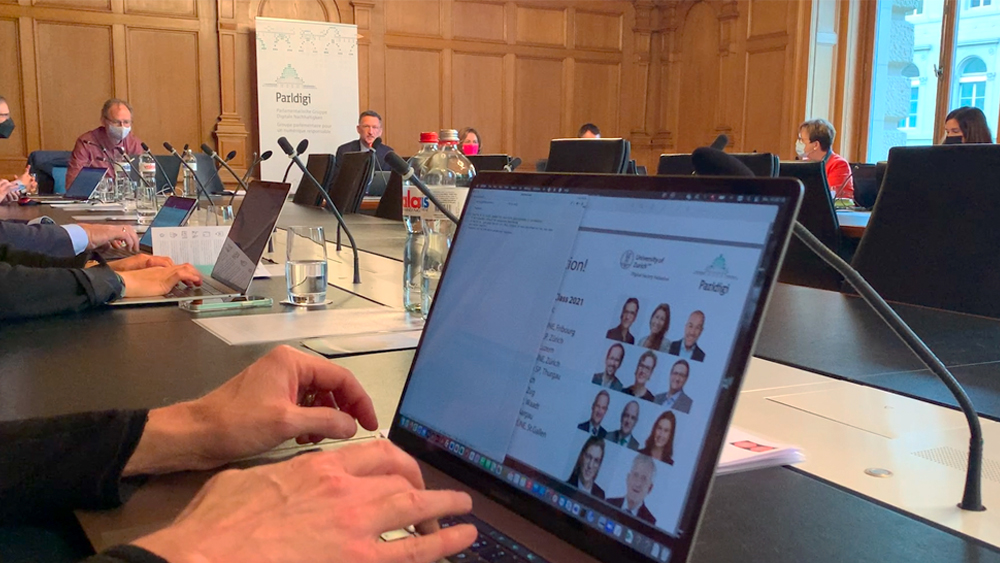